The despicable despotic bigot Karl Marx created the Communist Manifesto paid for by the Atheist bankers to rob, murder, and enslave the people of the world.  The Bolshevists are running the US administration, Wall street, the IRS, the federal bank and everything else.  People should understand just how demonic the Bolshevists are, they have no empathy, easily starving, robbing and murdering millions.  In Russia the Bolshevists committed horrific torture, mass executions, slow mass starvation of men women and children, leading to genocide, cannibalisms, and slavery, a pure demonic evil, creating hell on earth for the people they promised to liberate.  Karl Marx’s socialism is in the US.  Most people cannot imagine the levels of evil that those leading it are capable of.  That is why we have to look back in history to ensure we learn the lessons from the past to fight back before we have to live them.

“This splendid territory [the Balkans] has the misfortune to be inhabited by a conglomerate of different races and nationalities, of which it is hard to say which is the least fit for progress and civilization. Slavonians, Greeks, Wallachians, Arnauts, twelve millions of men, are all held in submission by one million of Turks, and up to a recent period, it appeared doubtful whether, of all these different races, the Turks were not the most competent to hold the supremacy which, in such a mixed population, could not but accrue to one of these nationalities.” Karl Marx, “The Russian Menace to Europe,” 1853

Marxist regimes around the Globe have been responsible for a greater number of deaths than any other political ideal or movement in the history of mankind, the death toll totals more than 94 million.

Utter Nazi trash – click bait for ‘the Duran’ – only a cretin would even consider this as serious and only a miscreant would publish it.

Do you guys ever read this ‘filler material’ before you pubish it? Better to have nothing than this.

Credibility level of your site has now sunken about 50% to be in anyway affiliated with such historical/hysterical deception.

Looks like someone who considers himself a socialist experiencing some cognitive dissonance when his hero turns out to have been a genocidal racist! That response is on the same level of the pro-abortion folks melting down when Margaret Sanger’s own racist ideas are brought to light.

Here’s a clue: all of these philosophies were connected to Eugenics: fascism, socialism, communism, feminism. All of them are evil to the core.

I don’t quite understand the title: Karl Marx planned Holocaust for Europe’s Racial Trash If they are talking about the Karl Marx I know about, he was a German Jew, born of Jewish parents (although later baptized and apparently changed religion), why would he plan the Holocaust to kill Jews like him, or call his own people “Europe’s Racial Trash.” It does not make any sense at all. His political philosophy consisted of being anti-capitalism and pro working people.

There was “NO” Holocaust, back to school for you.

I have Raised a glass on March 14th (for the last 7 years, Three days before St. Paddy’s Day), to celebrate the death of the demonic Jew, Karl Marx. Countless millions have been gratuitously murdered by his Marxist ideology, that this evil Luciferian is directly responsible for.

Marx was not a Semite, he was a Khazarian, like most of the Ashkenazi who emigrated to Palestine.

Then how about toasting, Jacob Schiff ? Romanov murderer, Rothschild, WW1 & 2 Instigator ?? Uncanny that they are all KIKES HUH ? Don,t forget Stalin,

This subject is the untouchable one. I congratulate the Duran for publishing it. But let’s see where it goes. I have tried to find enlightenment by looking at ancient history, when the jews were in deep discussions at around one AD and what began to coalesce into Christianity.. But I keep having to go back to the simplistic observation that any people that calls itself “the chosen people” are going to exasperate those around them from the get-go.

re congratulating the Duran for publishing it. The Duran also censors, only is clever about it so you don’t notice it. My comment above: “I don’t understand the title….” was not approved until today, November 18, almost three weeks after I made it. Of course no readers read it three weeks later, so for all practical purposes, it is also censored. I can give it the benefit of the doubt as it is possible that the Duran has no choice in this matter, as all media is controlled in the world of freedom and democracy we live in. 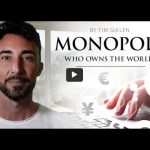