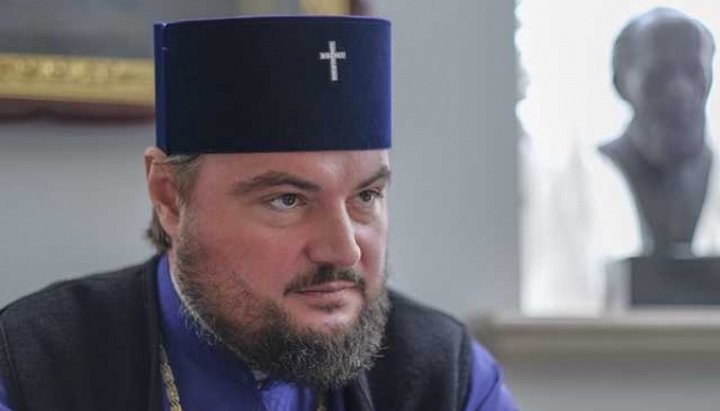 Referring to the compromising content of the Metropolitan’s correspondence in Telegram messenger, the brethren of one of the monasteries in Western Ukraine allegedly sent e-mails to the hierarchs of the Orthodox Church of Ukraine calling on them to bar Drabinko from participating in important negotiations, initiatives and projects.

The mailing was reported on the website 5.ua by supporters of Metropolitan Olexandr. According to them, in early December last year, in private conversations, the Bishop complained he had some problems with his phone. It didn’t seem to matter much at the time, and pretty quickly everyone forgot about the story, but now the hierarch’s inner circle recalled those fleeting remarks and is interpreting them as evidence of a possible hacking attempt.

Soon the content of the provocative mailing became known and screenshots of the hierarch’s correspondence were found, some of which served as a reason for calls for the tacit isolation of the hierarch. The authors of a short investigation from the Telegram channel Churcher note: “The article of Drabinko’s supporters, with which we started the story, probably refers to mutual accusations on the basis of financial differences that arose between the hierarch and designer Andriy Makarchuk during an attempt to implement a joint business project for tailoring.

However, in the screenshots, we also saw dozens of carefully “cleaned” chats with SBU (the Security Service of Ukraine) employees, correspondence with foreign clergy (from Russia and the CIS countries to America and Western Europe), and what is most unpleasant – pornographic photos that are sent to Bishop Olexandr by his admirers, whom he, apparently, out of the kindness of his heart, very affectionately and understandingly communicates with. And apart from photos, the gay theme runs through a significant part of the metropolitan’s conversations in a rather noticeable way.”

English translation of these conversations is said to be emailed to some Greek clerics. It can be found here. 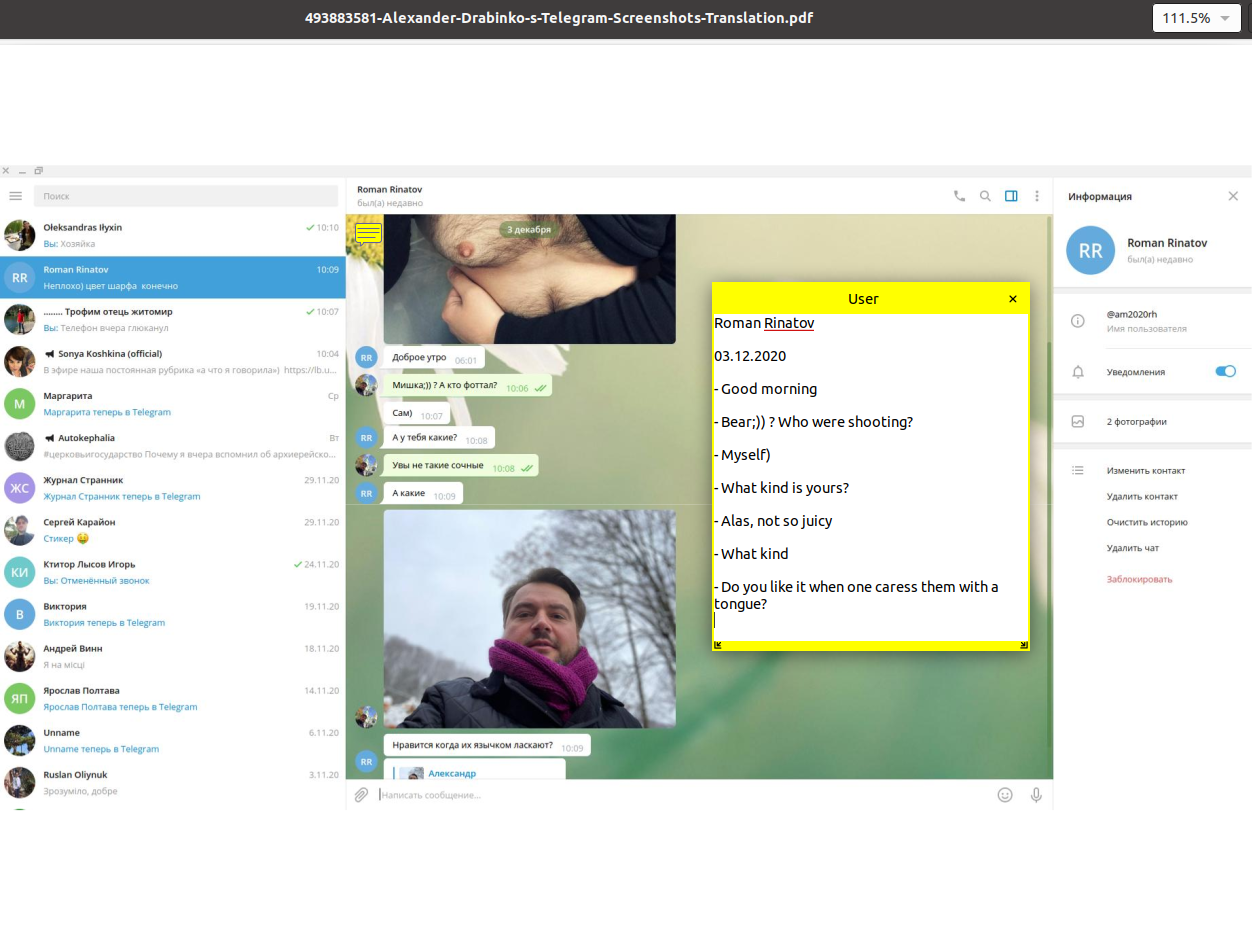 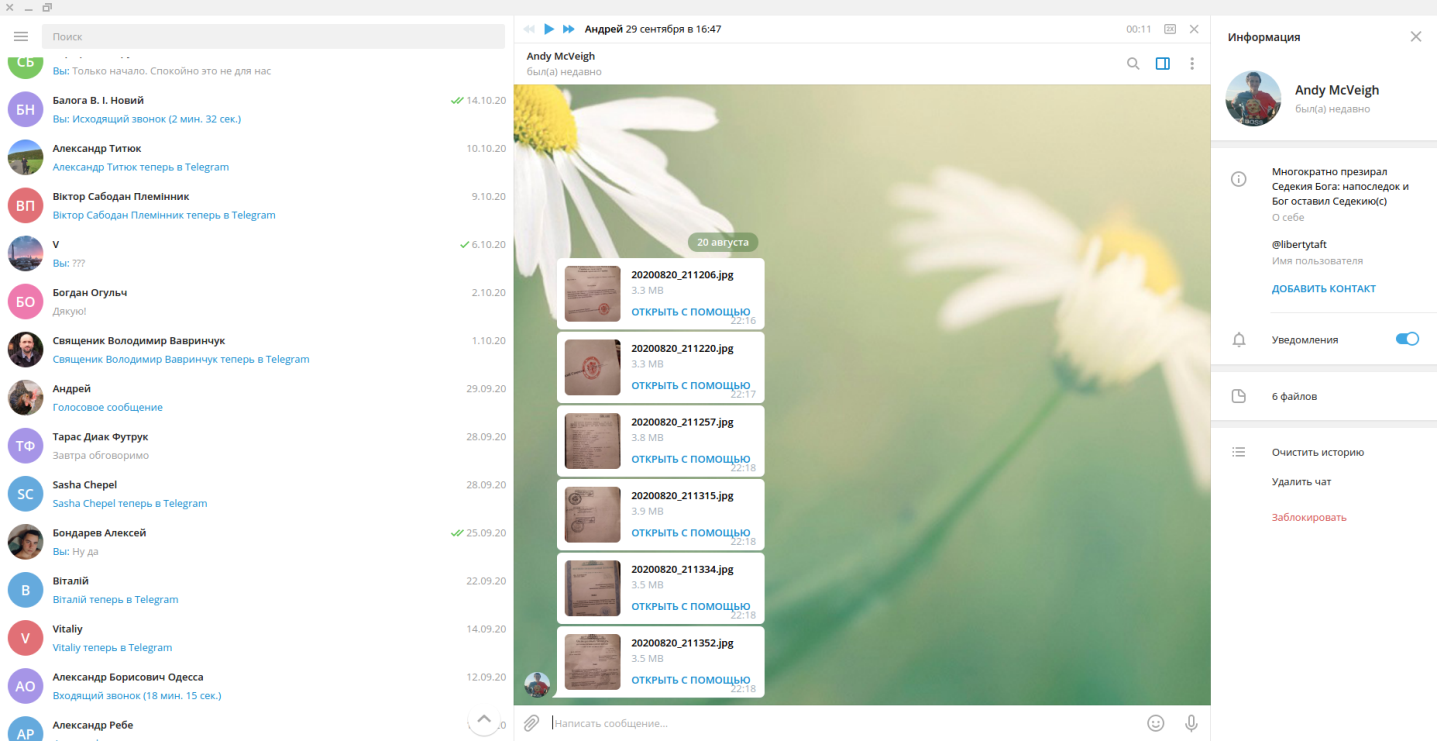 In fact, both homosexuality and Bishop Olexandr’s possible cooperation with the SBU have already been covered in the media. As well as politicking, alcoholism, financial violations during the construction of the cathedral, the deprivation of Vladimir Sabodan, the canonical Ukrainian Orthodox Church’s late Primate, of proper treatment in order to manage the church on his behalf for a longer time. However, the mention of Drabinko’s correspondence with foreign priests is particularly interesting and intriguing. And for a good reason: his contacts extend from the canonical hierarchs of the Ecumenical Patriarchate to representatives of the unrecognized Russian Orthodox Catholic Church (e.g. Olexandr Ilyukhin) and the Autonomous Ukrainian Orthodox Church in America (e.g. Andy McVeigh). 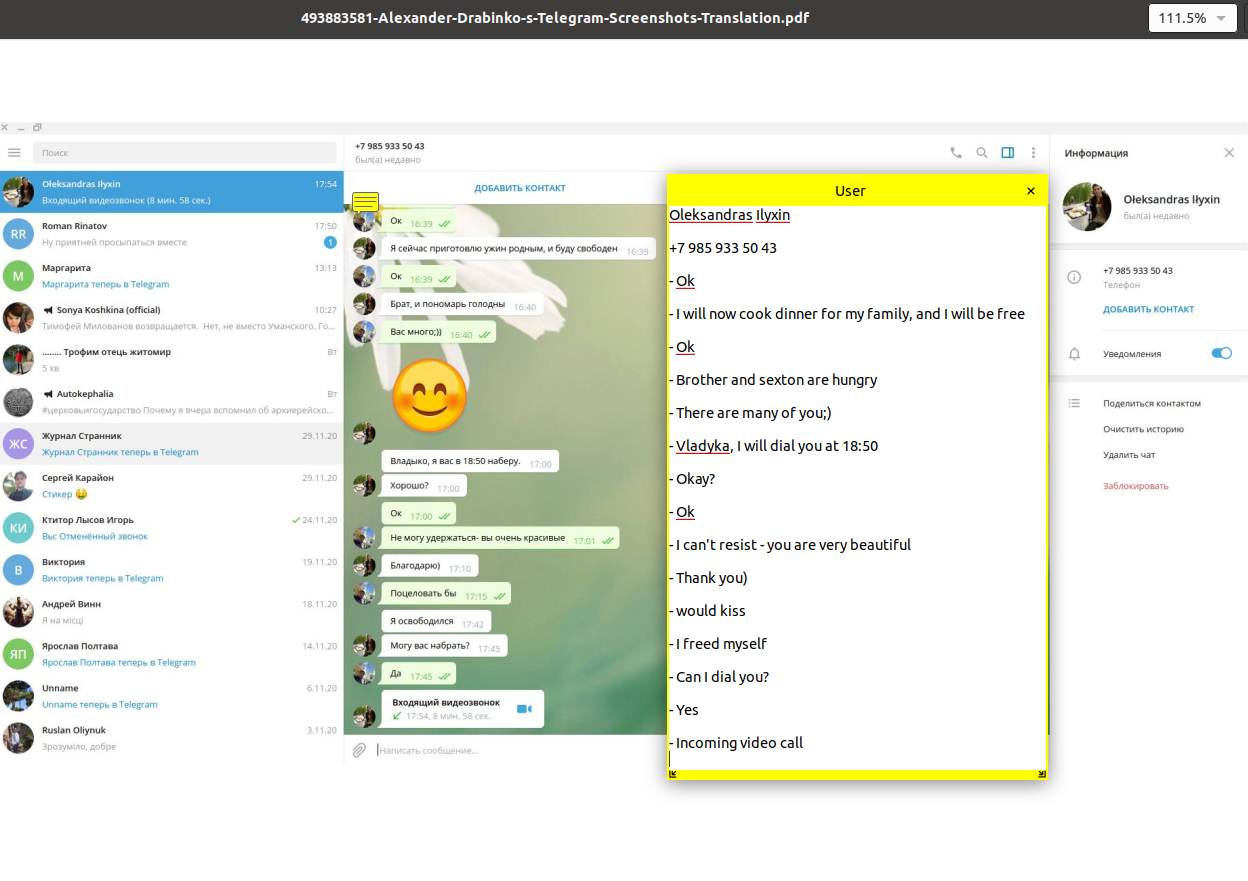 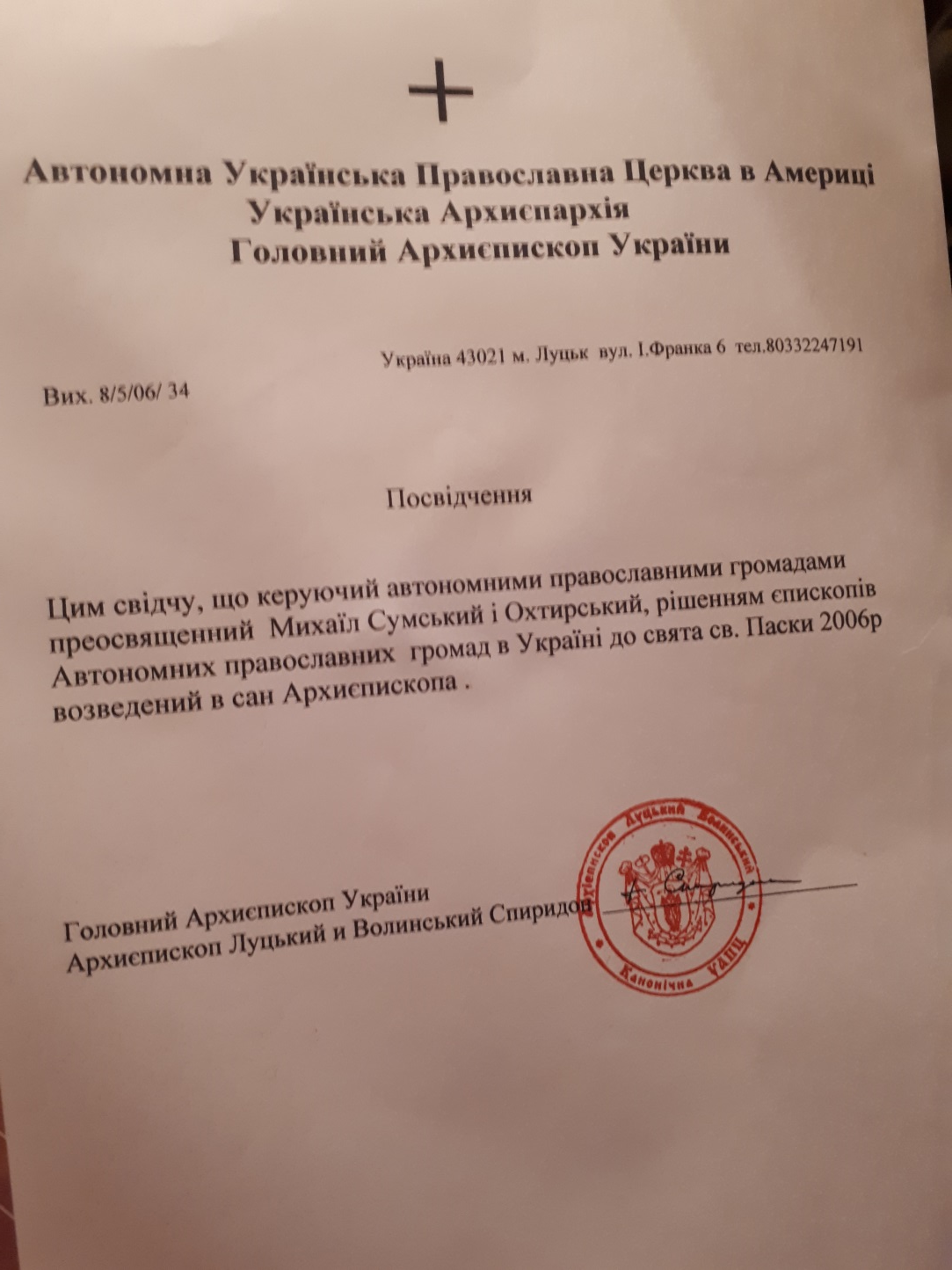 It is noteworthy that the lobbyists of Metropolitan Olexandr Drabinko’s isolation did not pay attention to the Hierarch’s ties, rather dubious from the point of view of canonical local Churches, and obvious risks to the Orthodox Church of Ukraine caused by them! Otherwise they noticed it, but decided not to raise in their letters the tricky issues of canonicity, so difficult for the conscience of those who do not have apostolic succession and unrepentant ministers of the Ukrainian schism. Very much in the spirit of the duplicitous policy of the Orthodox Church of Ukraine and those who entered into communion with it. As well as the reaction to the revealed evidence of the Bishop’s vicious way of life from the “brethren” of the schismatic monastery, which for some reason is not fighting for the purity of their “church”, but only for its “reputation”.

“In this regard, it is proposed – of course, without giving official publicity to Bishop Olexandr’s way of life – so to speak, “to push him to the sidelines”: under various pretexts, to prevent him from participating in important church-wide projects and initiatives, especially to minimize his contacts with representatives of other Local Churches and to exclude him from meaningful negotiations with them,” the activists of the Orthodox Church of Ukraine said in their address to its bishops.

As for the background of such a campaign to isolate Drabinko, possible reasons, causes and initiators, the Ukrainian media and Telegram channels has named two main versions at the moment.

Drabinko’s supporters supposed the Primate of the Orthodox Church of Ukraine, Metropolitan Epiphany Dumenko, is possibly involved in it. They suppose that due to the lack of trust-based relations, the Primate could take Drabinko’s participation in the ordination of the Exarch of the Ecumenical Patriarchate in Ukraine and the fact that during his first liturgy, Bishop Mikhail of Comana served not him, but the Bishop, as an “excessive rapprochement” of the former bishop of the Canonical Church and the Phanar’s representative. The “conspiracy theory” could also be fueled by the fact that during Bishop Olexandr’s visit to Turkey his companion was one of the longtime bishops of the Orthodox Church of Ukraine, Bishop Matfiy (Shevchuk) of Volodymyr-Volyn and Turia.

Epiphany’s suspicion can be explained by sporadic rumors about his possible replacement, the Phanar’s strengthening control and the transition of some bishops to an alternative canonical jurisdiction in Ukraine (under the omophorion of the Exarch), as well as by the objective difficulties that arise in the development of Church-state relations and the formation of the Ecumenical Patriarchate’s Stauropegion in Ukraine headed by Bishop Mikhail.

The Churcher Telegram channel’s publication, claiming its authors are familiar with the text of the scandalous mailing, states that behind the attempt to discredit Metropolitan Olexandr could be the entourage of Metropolitan Mikhail (Zinkevich) of Lutsk and Volyn, an influential former bishop of the so–called Kyiv Patriarchate, who could have headed the Orthodox Church of Ukraine if he had not been forced to withdraw his candidacy in favor of Metropolitan Epiphany. And indeed, the rapprochement of the ambitious Metropolitan Olexandr, who boasts of his “undisputed ordination”, with the Bishop of Comana, and his partnership in this matter with Bishop Matfiy, whose diocese was recently separated from the Volyn diocese – all this could equally worry Metropolitan Mikhail.

However, the authors of the Telegram channel also admit that the forces plotting against Drabinko, for example, Metropolitan Epiphany, could simply set up Zinkevich, thus trying to play off the leaders of the two “parties” in the episcopate of the OCU against each other.

Of course, this story is unlikely to end so easily. It is obvious that everyone will justify themselves, some for their way of life, some for a possible attempt to defame another hierarch. Probably, law enforcement agencies will conduct their own investigation: if both Drabinko’s homosexuality and cooperation with the SBU are true, then he has nothing special to hide from them, and nothing prevents him from filing a complaint about the offense. However, there is enough food for thought about the atmosphere prevailing in the Orthodox Church of Ukraine, whose rapid formation is so confidently praised by Patriarch Bartholomew.

As Adolf “Hitler” Biden fulfills the role for the Global Fourth Reich we can have some music: 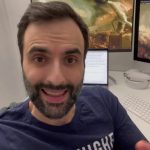 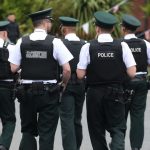