The news coming from the US about the riots “based” on the killing of George Floyd, a black man, at the hands of a white police officer in Minneapolis, Minnesota, continues to be disturbing, to say the least. The updates coming in from the overnight period of June 2nd to June 3rd, 2020 show stories of police taking a knee and then joining with the protesters, in an effort that may be characterized as “a way to get them to stop destroying things” or… that the police are breaking ranks with their superiors and defecting to the protesters? This, and the once supportive Drudge Report posting a piece saying President Trump’s approval is within the “dread zone” of 39%, suggest that a terrible conflict is brewing. Indeed, pundits are writing about these events as the entry of the United States into its second Civil War. However, Dr Steven Turley offers a different analysis: We have been in a civil war for almost four years now.

While this seems to be doom on top of gloom, it is important to listen to his thoughts carefully. Dr. Turley is unusually good at scholarly analysis that is certainly connected to the real world but without being necessarily swept up into the passions of the moment. He is not alone in this.

One of the prime indicators of a real problem anywhere in the world is the state of the financial markets. Money drives life as oil does, and while this is a reality often reviled by ideologues, it is nevertheless a reliable indicator of crisis or the lack thereof.

The killing of Mr. Floyd took place on May 25th, 2020. The riots began as demonstrations on May 26th, but quickly escalated to increasingly violent incidents across the US, and even internationally. In that time, the main indicator of US markets showed almost a 900 point rise, and over the weekend, the last five days, which have featured great amounts of violence, the market seems undisturbed:

Even Apple, that great bastion of liberal values as much as it is a great computer company, is now back near its pre-COVID hights.

This may be an indicator that the powers that be take these riots as another “incidental” occurrence in the very tumultuous presidency of Donald Trump. However, there is also the view that most of what is driving the riots is not really anger over George Floyd’s death and its circumstances, but that there are professional agitators taking advantage of an America that has been cowed by COVID fears and stripped of their resources for dealing with life, namely church attendance, corporate prayer and worship of God.

Americans have been isolated from one another, from their communities and given no real recourse but to view life through the glow of the computer screens and TV at best. This is a dangerous setup, and it quite honestly may have been planned or extremely adeptly handled in recent days to give us scenes of near apocalyptic intensity as we watch (specially selected) buildings burn, and the largely activist media does everything it can to implicate the US president as the cause of all problems in America. 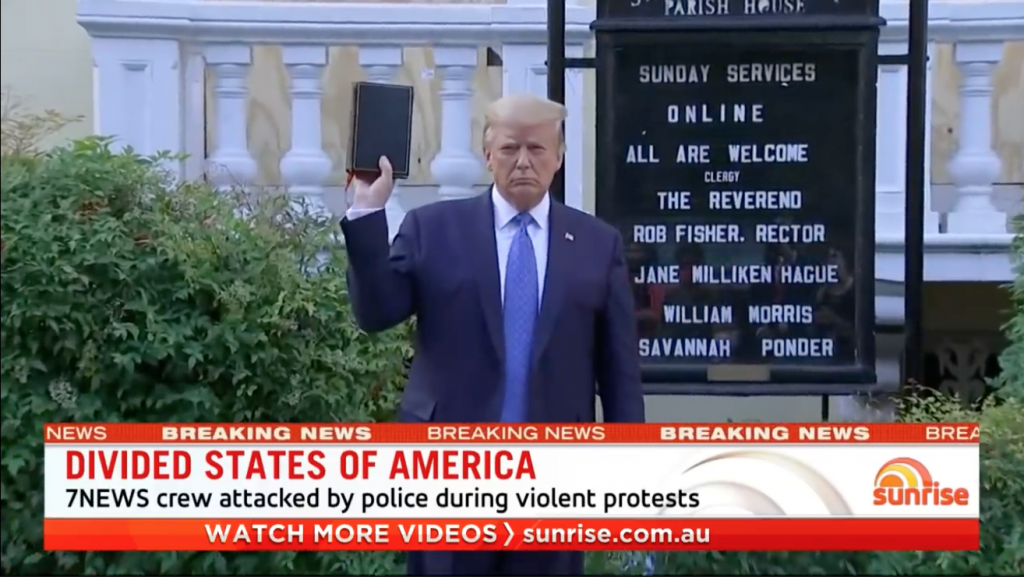 In a sense, they are correct. President Trump does represent a threat to their vision of the world, an ethno-tribalism that itself is the tool for cultural Marxist ideology taken to its suicidal maximum. Marxists and socialists are remarkably short-sighted, given that their ideology treats individual persons as having no intrinsic value whatsoever, but only useful as instruments to accomplish THE GOAL, which is a socialist “utopian” state. This despite the successful analysis of such states, both real and fancied, by the likes of authors as Huxley and Orwell. Even Marx himself held no regard for happiness, his vision was merely the grim realization of a particular “order” that he, as a permanently aggrieved person, believed would make everything somehow “right.”

Just an aside: It is very dangerous to trust the visions of disaffected angry people. Following these visions destroys lives. Just ask the Russians who endured the repressions under Stalin, or the Jewish people who died at the hands of Nazis in Germany. The seminary expellee, Stalin and Hitler, the unsuccessful painter, definitely were full of grievances.

President Trump’s vision is of what Dr Turley terms “civil nationalism”, where the people of the United States define themselves as “Americans” regardless of whatever ethnicity or race they are. This is not pie in the sky, as fifty years ago, this is indeed how Americans of all races, colors and creeds defined themselves. In essence, civic nationalism could be said to portray being “American” as the race. Dr Turley draws a parallel with Russia of modern times, where everyone living in Russia, regardless of where they are from, are nevertheless “Russians”.

These opposing ideologies appear to be at the crux of the present civil conflict, which we can certainly term a civil war, though as yet it involves no armies. It may come to this, but how or if this becomes a bona fide civil war with armies fighting each other remains to be seen. Personally, I see such a conflict as rather unlikely. It is more disruptive for it to continue in the manner that it is taking presently. But we have to wait and see.

Steve Turley’s analysis suggests something about this civil war that also may explain why the markets do not seem bothered by it: the turbulence is easy for commercial companies to actually use to their own advantage. Nike has been doing this in their own business for years, riding off the fame of Colin “take a knee” Kaepernick. I have seen several advertisements from businesses pledging solidarity with the protesters in the name of “racial equality”, but these moves ostensibly are made to protect and drive their own businesses. Tucker Carlson mentioned this also:

“What you are watching is class war, disguised as race war… It is very easy to see who is benefitting from [the situation]… Citibank is happy to put ‘Black Lives Matter’ logos on its Instagram page, precisely so you won’t ask what interest rates they are charging black people. If you really cared about the poor, you would not crush them with debt they can’t afford…”

Now, Tucker comes at this from his usual stance – he is a liberal, but not the same kind of liberal that is creating the race-elitism or gender-elitism that the cultural Marxists work at so diligently. Indeed, his liberalism is far closer to what conservatives think – that people ought to be free to work out their own lives and to have the opportunity for prosperity. His argument is a bit different here than Dr Turley’s, but this is probably only a difference in the angle each analyst is viewing the present situation from. It could easily be said that they are both quite correct.

Here is an article that looks at how the misuse of deadly force by American police forces can be solved:

Unfortunately, decades of police “military-style corporate culture” and the “blue wall of silence” means that meaningful changes to the policies regarding the use of deadly force will continue to be ignored despite the fact that an average of three Americans die at the hands of police officers every day.

A lot can be said about who are the governors and mayors of the states where police violence takes place — because their rule tends to create the kind of corrupt atmosphere in which police violence goes unchecked. In fact, a Dem mayor like Bloomberg deliberately promoted over-the-top policing measures (like stop-and-frisk), knowing that the police would suffer greater criticism and would play perfectly into the hands of the liberal media ready to destroy more of the cops’ hard-won integrity.   However, the actual data on police use of force predominantly reveal professionalism and restraint:   “A 2018 study analyzed… Read more »

I think you have demonized socialism unfairly. The whole point of most kinds of socialists is that human beings all have dignity as opposed to the radical right which says, in effect, people have only the dignity they can grab by their abilities–if they can’t fend for themselves then let them die etc. Part of the emergent global civilization (with the exception of the USA) is that citizens should all have access to some form of universal care, enough food to eat, some sort of shelter and a healthy society with institutions that are focused on the public good and… Read more »

Americans face a future far worse than the “near apocalyptic” images of rioting and burning presented in the media: not a second civil war but a third world war.
https://www.ghostsofhistory.wordpress.com/

Unfortunately, an ignorant majority of the populations in the vassal West as well as their counterparts in countries throughout Africa, Latin America & Asia are addicted to the toxic Dollar hegemony. So their societies will suffer too — unless they take drastic action (ie. legalize industrial hemp & cannabis for commercial use; corporate power reigned in; etc.) to boost their domestic economies while being able to grow food in order to become self-sufficient.   Hold onto your hats, folks! If the world manages to emerge from the coming chaos, one simple rule should be common among all deplorables: “Death to… Read more »