If the current Ukrainian regime was not engaging in a war of ethnic cleansing, using chemical weapons on civilians, sitting on top of nuclear reactors that could fail at any moment and impoverishing a large population, it would be something of a circus, rather than the ominous horror show that it is.

But under this dark cloud is a silver lining, one best explained through the infamous words of Ataturk, that state: “They go as they come”.

If one attains power through peace and popularity, it is, according to Ataturk’s maxim, likely that one can resign peacefully and while still popular. Inversely, if one comes to power through violence, greed and corruption, one might fall to the very same forces.

Even before the disgraced former Georgian leader Mikheil Saakashvili returned to Ukraine after Kiev’s leader Petro Poroshenko stripped him of his newly acquired Ukrainian citizenship, many violent protests in Kiev, including break-ins during parliamentary sessions, have marred a regime whose lack of compassion is only matched by a lack of dignity.

This is what makes the fall, and pseudo-rise of Mikheil Saakashvili all the more interesting. It is a story that ought to be called emblematic of the ‘Ukrainian dream’, whereby no matter how disgraced one is, no matter how much corruption one engages in, no matter how cynical ones’s so-called politics are, even such a person can have a shot at power and since this concerns Ukraine, there is a chance that a volley of gunshots, could indeed pave the way for whomever is next in power.

As I recently wrote about the return of Saakashvili to Ukraine, a return which saw himself and his fans running past a police barricade,

“While the key element of Poroshenko’s decision to deprive Saakashvili of statehood was the proximate timing to Poroshenko’s visit to Georgia where the former leader is sought on corruption and fraud charges, Poroshenko didn’t need one more headache from a potential rival, unpopular though Saakashvili was at the time.

While Saakashvili’s ‘great  entry’, did have a comical element to it, there is, by Ukrainian standards, a serious side.

Saakashvili is keen to paint himself as a heroic freedom fighter, perhaps even a ‘democracy activist’ who has been on the receiving end of an unjust and possibly illegal deal by a corrupt regime (that part is objectively true) which has made an individual stateless through a wanton action (something which many experts claim is illegal).

Beyond this, the arch-opportunist and former Kiev Prime Minister Yulia Tymoshenko has endeared herself to Saakashvili’s cause. Tymoshenko is widely perceived, even among her comrades on the extreme-right, as someone who will say and do anything to get closer to power. The fact that she has thus far played no role in the Poroshenko regime, has made her feel shafted and she’s now betting on Saakashvili helping to whisk her back to the limelight which she so clearly craves.

With police in western Ukraine now claiming that they have opened criminal proceedings against Saakashvili for his border stunt, it is becoming ever more likely that a man who was largely forgotten and ignored, might be an unlikely candidate to shed light on the corrupt and habitually duplicitous nature of the Kiev regime, even though Saakashvili’s differences with Kiev are largely cosmetic and personal. In terms of policy, both Poroshenko and Saakashvili have a history of committing war-crimes, destroying economic relations with Russia, overseeing largely ineffective regimes whose popularity wanes rapidly and stealing state-treasure for personal gain. That being said, if one was forced to choose, it must be said that between Poroshenko and Saakashvili, the latter is more of a smooth political operator than the former. That being said, the bar has been set incredibly low.

In this sense, Poroshenko in depriving Saakashvili of citizenship, has created a headache for himself”.

With all this in mind, it is both amusing and somewhat bemusing to see Saakashvili take to the Kiev Maidan calling for regime change while his supporters, complete with riot shields (likely stolen from police as they were during the 2014 Maidan), projectiles and angry rhetoric stand beside him.

As is typical during such protest in Kiev, injuries were reported and arrests were made. One man even tried to block the entrance to Kiev’s Rada (parliament). 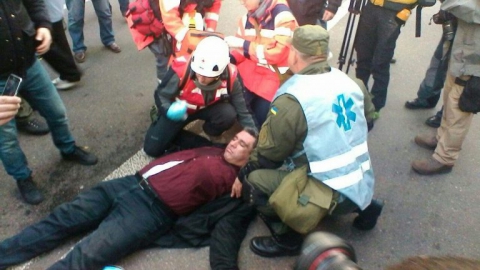 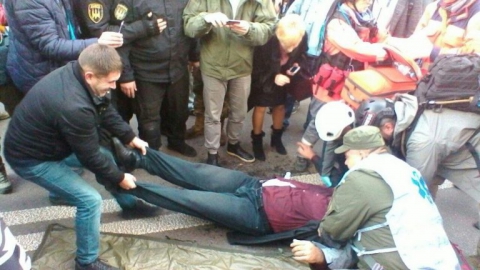 While Saakashvili used to be  a long-shot in respect of becoming the leader of a new Kiev regime, Poroshenko’s misfortunes mean that it is entirely possible that the same coalition of neo-Nazis, corrupt oligarchic soft power, paid protesters and semi-political to apolitical gangs and street  thugs, could now rally around Saakashvili as a figure who could give some ‘legitimacy’ (by Ukrainian standards) to their cause which they believe is still unfulfilled by the paralytic and openly corrupt Poroshenko regime. 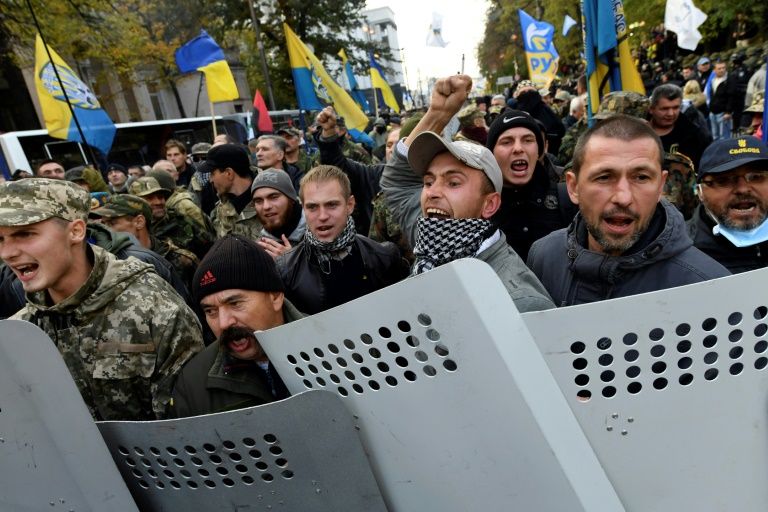 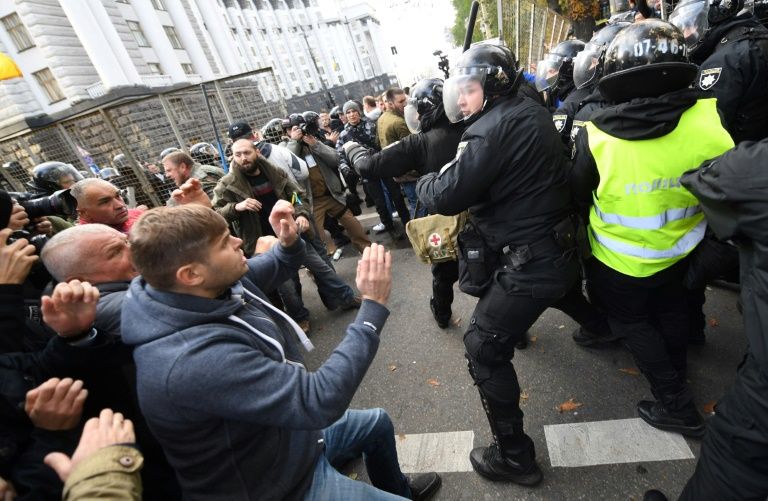 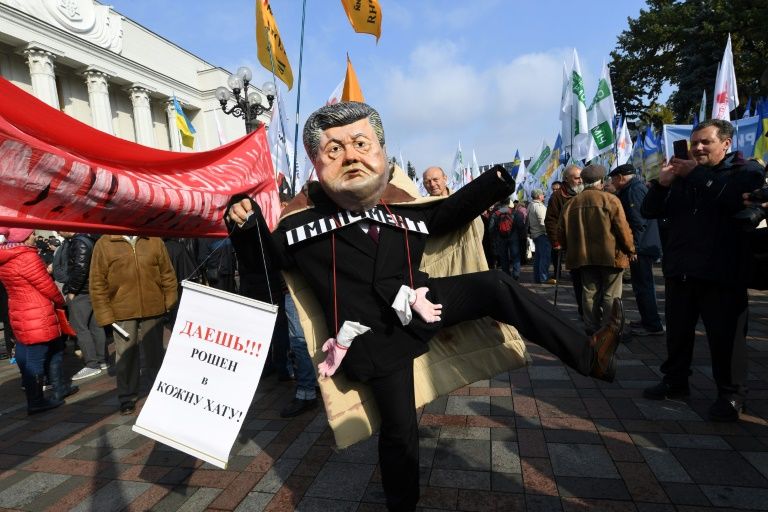 Furthermore, while the US and EU actors helped to foment the coup which brought the Poroshenko regime to power, because Saakashvili is equally pro-western and has even more contacts in Europe and the US than Poroshenko ever did, many in Brussels, Washington and Berlin may look the other-way and somehow call a Saakashvili led Maidan 2.0, a ‘marvel of democracy’. In other words, because the western powers know that so far as they are concerned, a Saakashvili regime would be little different than the current one in respect of its alignment with the west, Poroshenko’s ‘supporters’ could realistically be exposed as fair weathered friends.

Saakashvili still has many obstacles to overcome. His legal status in Ukraine is still technically that of persona non-grata, but that’s nothing a nice bribe or barring that, a soft or hard coup couldn’t fix. Likewise, he’s also an outsider, but if anything this may give him some credibility among a radical political clique that is prone to savaging its own.

The Maidan putschers were always looking for a ‘European’ saviour and as a self-styled European with property, money and friends in the United States, Saakashvili may be just that man. Furthermore, as Poroshenko apparently has poor relations with the Trump administration, the White House might actually prefer working with Saakashvili, a man who has had more years to refine the process of ingratiating himself to the US deep state, than the largely inept  Poroshenko.

If such events were taking place in any place other than Ukraine, the same epithets I just used to describe Poroshenko, would be aptly applied to Saakashvili. The problem is that the state of politics in Kiev is so abysmal, that Saakashvili almost looks competent by comparison, in spite of his often accidentally clownish demeanour.

With Russia failing to come to the military aid of the Donbass republics and with the west growing increasingly lethargic about Kiev, Saakashvili could become the international symbol of the Kiev stalemate, a foreigner in a strange land who finds his fortune by virtue of being the last man standing.

This will do little good for ordinary people who are struggling to economically survive, but it will demonstrate that the Ukrainian regime is as corrupt as that of any easily mocked banana republic, because that is what Kiev has become.