Our coverage of the William Binney testimony, given in a LaRouche PAC / Schiller Institute sponsored news conference on July 23rd continues. If you watch and listen to former NSA analyst William “Bill” Binney describe the way in which the hacker “Guccifer II” allegedly got his data from the DNC servers (a partial transcript also appears here, with a link to the whole transcript, courtesy of Eric Zuesse, another of our writers, far more prominent than I), you see and hear that there was no way that the alleged data hack could have taken place over the Internet using the resources available at that time. (CAVEAT: This is a claim that has yet to be independently verified, but that will come as soon as I am able to provide such verification.)

The upshot of the claim is that Russia was not the party to have hacked the Democrat National Committee, that instead, this was carefully orchestrated by agencies within the American CIA, ostensibly for the purpose of preventing Donald Trump’s election to the Presidency and later, to impede and destroy his presidency, since he won, anyway.

If this is indeed an inside job, it raises many questions, ranging from the stupidly obvious to those that are geopolitically extremely complex. As I am by no means a geopolitical whiz in the way many of our other writers are, I will not attempt to ask geopolitically complex questions. For me, the viewpoint here is very simple: right versus wrong, Christianity versus secularism and globalism in all its forms. Anyone reading my pieces already knows this.

When the opportunity came to get involved in the William Binney conference, though, it was a golden opportunity to ask some of the questions that concern regular people, perhaps, especially those living in the Russian Federation, and even including the Americans who also make our homes and lives in Russia for various reasons.

It is worth noting that the Gateway Pundit reported that their website went down rather suspiciously, the moment they posted the information that Russiagate was a CIA directed operation. The link offers their take on this whole interview and mentions the service interruption.

We were able to submit four questions to the news conference:

1. I live in the Russian Federation, and the country has suffered from sanction after sanction since before President Trump’s election, but also continuing during it. If the Russiagate story is indeed the hoax you say (and I agree) that it is, then what do you think accounts for the imposition of these very painful sanctions?

3. Finally, Russia’s internal policy moves have been towards a very strong integration of Church and State in the structure called “Symphonia,” where the Church has an affect on state policies, creating guidance for it along a path that the Church understands as pleasing to God. I know the narrative in the US is the opposite – that the State imposes its will upon the Church and the Church folds and does what the State, namely President Putin, says. How can we get the message out to America that this narrative generated by some of the same people as those who formulated Russiagate, is simply not true?

4. How important do you believe it is that President Trump wins re-election this fall?

It is unfortunate that our interlocutors dropped my third question, but nevertheless what is said is very useful.

Mr. Binney notes that the American “cultural memory” of the Cold War was deliberately chosen by the architects of Russiagate to frighten the American people about Russia now. For example, if one looks at Rush Limbaugh’s “35 Undeniable Truths” we can see how there is a great deal of conviction about the evils of the USSR. He has on occasion carried this attitude over to Russia and President Putin as they stand today, no doubt a “knee-jerk” reaction to President Putin’s statement that he missed the Soviet Union (you need to have your Russian-language skills on, or at least the “auto-Translate” on YouTube to see this:)

Of course, there are so many contextual clues to show that Mr. Putin is not wishing for a return to anti-Christian repressive Communism, but rather a theme many Russians in modern times share: that the Soviet Union was at least stable contrasted with the severe period of lawlessness most Russians remember from the time Communism fell in 1991. We cover this more elsewhere.

This is truly a crime committed against the American people, yet in the fashion often shown by recent generations of power brokers in the US, the application of that power beats down others who are completely innocent of any wrongdoing, just because the preservation of that powerful group is the most important thing.

This is absolutely shameful for a nation that has experienced and been blessed with such greatness as the United States of America. It is something that President Trump is dedicated to fixing.

And they know it.

One out of three ain't too bad

The bad news for Russia is that if Biden is elected it is a de-facto 3rd term for Obama and he would like nothing better than a war with Russia. He was a vindictive man and probably still hates the fact that Russia came in and successfully defended Syria against the US/Saudi backed terrorists.
The good news for Russia is that when this conflict happens after 30 days the US will have to end it. The US has no replacements. 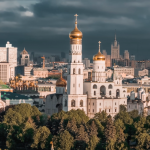 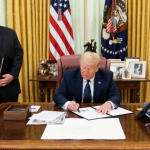