The Russian Defense Ministry has confirmed that the Syrian Arab Army (SAA) has come under attack in Deir ez-Zor from areas controlled by the Kurdish led US proxy militia SDF. As previously indicated, either the Kurdish fighters are firing directly on SAA troops, or ISIS elements are now working in de-facto collaboration with the putatively secular SDF.

In any case, Syria has vowed to liberate “every inch” of its legal territory against any enemy, including the SDF.

In spite of the strikes on the SAA from SDF territories, Syria now controls 85% of Deir ez-Zor and at the rapid pace with which the liberation is being conducted, all of Deir ez-Zor is expected to soon be back in Syrian hands after three years of ISIS occupation.

“The Syrian governmental troops have been shelled twice from the areas on the western bank of the Euphrates controlled by the Syrian Democratoc Forces and the US military”.

In spite of this, he added,

“More than 85 percent of Deir ez-Zor’s territory is under full control of the Syrian troops. Over the next week the city will be liberated completely.

During the past 24 hours, the Syrian government troops continued their offensive operations to destroy the last Daesh bridgehead near the city of Deir ez-Zor. Over the past night, General Suhel’s assault detachments cleared about 16 square kilometers and two settlements on the western bank of the Euphrates of terrorists”.

After months of stalemate, the US and SDF have prematurely declared “mission accomplished” in Raqqa, claiming it was 80% “liberated”. This statement itself is patently untrue, as one occupational force has simply been largely subsumed by another in Raqqa.

Russia shines light on the shady anti-Syrian coalition of the US, Kurds and jihadists

Konashenkov explained that the US is keen to move its proxies into Deir ez-Zor in order to attempt to retard Syrian progress against ISIS. He stated,

“Russian control means registered the transfer of SDF militants from the province of Raqqa to the northern areas of the Deir ez-Zor province.

Russian Special Operations Forces servicemen, jointly with the Syrian troops, are carrying out combat tasks to destroy Daesh(ISIS) terrorists in those areas”.

“SDF militants work to the same objectives as Daesh terrorists. Russian drones and intelligence have not recorded any confrontations between Daesh and the ‘third force’, SDF”.

The Russian General added a warning that Russia will fire on the SDF and other US militants if they threaten the positions of the Syrian Arab Army. He stated,

“Fire from positions in regions [controlled by the SDF] will be suppressed by all means necessary”.

Konashenkov stated that Russia has made it clear to the US that it will not tolerate any SDF attacks on Syrian forces.

The war against ISIS is now a secondary issue, as the battle is all but won. The real race in Syria is between the Syrian government and the US proxy force SDF.

A very fine analysis that clearly marks which sides the US is on and what it is doing in each of them. RT.com and the Duran do not write in propaganda terms so the clarity and breaking news at the same time is more than welcome. Naturally why the US vilifies it endlessly. There are too many connections to Hitler Germany to miss them, just read: “The Rise of the Fourth Reich” by Jim Marrs

Latest news: Al-Nusra Front terrorists used artillery, tanks and infantry fighting vehicles during their offensive in the Idlib de-escalation zone, the Russian General Staff said on Wednesday. The US secret services were said to be behind the attack. The militants’ attack was “initiated by US secret services to stop the successful advance of the government troops to the east of Deir ez-Zor,” https://sputniknews.com/middleeast/201709201057558408-russia-nusra-syria-army-idlib/ “… as a result of measures undertaken by the Russian command and the Syrian general staff, the terrorist offensive was stopped, and they suffered significant damage. A total of 187 terrorist targets were hit by air strikes… Read more »

Google is paying 97$ per hour,with weekly payouts.You can also avail this.
On tuesday I got a great new Land Rover Range Rover from having earned $11752 this last four weeks..with-out any doubt it’s the most-comfortable job I have ever done .. It sounds unbelievable but you wont forgive yourself if you don’t check it
!si294d:
➽➽
➽➽;➽➽ http://GoogleHomeCashJobsMarketOpportunity/earn/hourly… ★✫★★✫★✫★★✫★✫★★✫★✫★★✫★✫★★✫★✫★★✫★✫★★✫★✫★★✫★✫★★✫★✫★★✫★✫:::::!sg244l..,…

Is there an option? 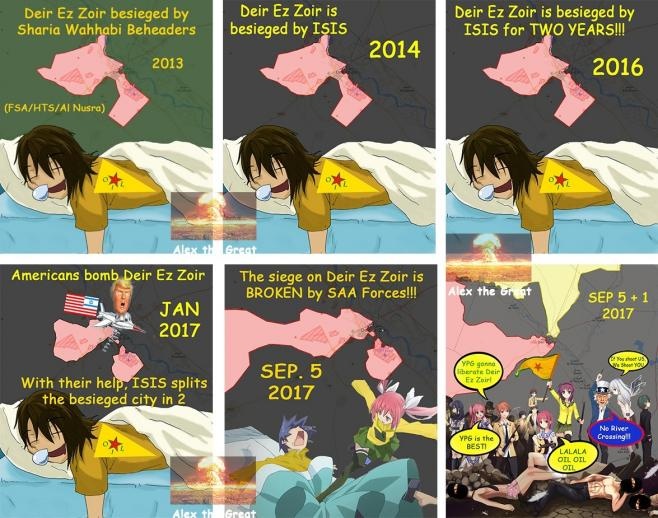 The drones show the whole picture “SDF militants work to the same objectives as Daesh terrorists. Russian drones and intelligence have not recorded any confrontations between Daesh and the ‘third force’, SDF”.