As America seeks to preserve its hegemony, in this case in the Middle East, it has more and more  continued to run into obstacles that have either directly or indirectly been erected by Russia’s activity in the region through its policy to eradicate ISIS and to provide stability to the Syrian nation in helping to preserve its territorial integrity.

These interests, however, are not Russia’s alone, but are shared both by Iran and Turkey, and therefore are also considered by the US general as a threat to America’s dominance in the region, as well as its regional interests, a perspective that is also expounded in the new military doctrine that was released at the beginning of this month.  RT reports:

The US is seeking to contain Iran’s rising influence in the Middle East and fend off challenges to Washington’s hegemony posed by Russia and China, the top general commanding US forces in the region told Congress.

General Joseph Votel, head of the US Central Command (CENTCOM), briefed the House Armed Services Committee (HASC) on Tuesday on the efforts against Islamic State (IS, formerly ISIS/ISIL) and the wars in Syria, Afghanistan, and Yemen. All of which fall under the purview of CENTCOM, “the only geographic combatant command executing active combat operations,” Votel pointed out. 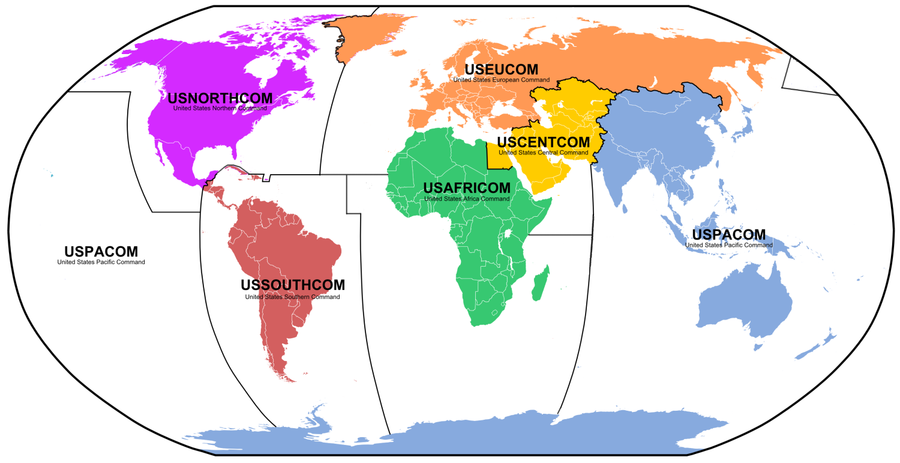 From Votel’s 45-page prepared testimony, it was apparent that the US regards Iran as the biggest challenge in the region, followed by Russian and Chinese efforts to chip away at Washington’s hegemony.

“An increase in Russian surface-to-air missile systems in the region threatens our access and ability to dominate the airspace,” Votel complained at one point, discussing Syria.

Unlike the US forces present in that country, Russian forces are in Syria at the invitation of the government in Damascus. Votel argued that the legal basis for the presence of US troops was the “collective self-defense of Iraq” from IS.

“The principle reason we are in Syria is to defeat ISIS, and that remains our sole and single task,” Votel told the lawmakers, echoing last week’s remarks by President Donald Trump.

CENTCOM commander Gen. Votel is testifying in front of HASC this morning – you can read his pre-written statement here https://t.co/4jrkjA84Ro

Votel made no acknowledgment of any role Russia’s intervention in Syria has played in the demise of IS. Rather, the general had some harsh words for Moscow, accusing Russia of playing “arsonist and firefighter,” fueling the conflict in Syria and then “claiming to serve as an arbiter to resolve the dispute.” As Votel explained, Moscow was offering diplomatic alternatives to “Western-led political negotiations” in Syria and Afghanistan.

Russia’s influence in the Central Asian countries that were formerly parts of the Soviet Union is “problematic,” as that could “limit US engagement options” and endanger NATO’s supply lines into Afghanistan, Votel said.

The general described Russia and Iran as “historic rivals” who nonetheless share interests, “including an overarching desire to sideline, if not expel, the US from the region.” The Russian and Persian empires did fight a series of wars over the Caucasus from 1651 to 1828. Iran was an ally of Washington from the 1953 CIA coup to the 1979 Islamic revolution, at which point the two countries became bitter enemies.

This is reflected in Votel’s testimony, in which he refers to common Washington tropes about Iranian imperialism and the “Shia crescent” from Iran to Lebanon. However, the CENTCOM chief seemed to backtrack from the previous narrative about the war in Yemen being instigated by Iran, choosing to describe it as a civil war in which Iran intervened to harm its regional rival Saudi Arabia.

“The conflict in Yemen has opened opportunities for Iran, which continues to provide support to the Houthis with the aim of building a proxy to pressure the Saudi-led coalition and expand its sphere of influence,” Votel said. He also revealed that the US has increased the number of advisers to the Saudi military over the past year, which should “help mitigate incidents of avoidable civilian casualties in Yemen.”

The Saudi-led coalition has been fighting in Yemen since March 2015, without much success.

“Both #China & #Russia seek to fill in perceived gaps in US interest by increasing defense cooperation & sales” per Gen Votel “They both are also cultivating multidimensional ties with #Iran” pic.twitter.com/te2f06Uy4b

Though Votel explicitly denied that Washington’s mission in Syria is to counter Iran, he said that the US should “build [a] strong relationship” with the Iraqi military and the Syrian Democratic Forces (SDF) “to impede Iran’s objectives in establishing lines of communications in these critical areas.”

He also talked about “ad-hoc democratic organizations” that have been established in territories liberated from IS by the SDF, which rely on US and coalition funding for survival. Continued funding would “help them maintain popular support and set conditions for enduring, stable governance,” said Votel.

However, US efforts to work with the Kurds in northern Syria have been threatened by the recent Turkish military incursion into the Kurdish-held district of Afrin. While the Kurdish militia that are there are not part of the US-backed SDF, there are family and tribal ties between them.

“Our alliance with Turkey is paramount,” Votel said, “but we must continue to urge restraint as their actions have clearly increased risk to our campaign to defeat ISIS.“

The CENTCOM chief also argued that Moscow and Tehran are seeking an end to the Syrian war because they are pouring “billions of dollars” in aid into Damascus.

Yet, in the same hearing, he argued that Russia “has to admit it is not capable or that it doesn’t want to play a role in ending the Syrian conflict,” and that Moscow’s role was “incredibly destabilizing.” No explanation was offered for the discrepancy.

Even though it is now well known that America is funding and training militaristic terrorist organizations in the region that continue to threaten stability in Syria, and beyond, the general bills Russia as the one who is throwing fuel on the flames of instability and violence.

This is, then, a very clear case of projection on the part of the general, who is knowingly lying to Congress about what America is doing, and with regard to the part that Russia is playing with its legal actions and efforts to eradicate terrorism and establish safety and security in the region.

In a recent testimony before the same congressional committee, Admiral Herry Harris, head of US Pacific Command, a similar such position was articulated relative to China and its activities in the South China Sea as the reason why America should be prepared for war against China. In keeping with the new military doctrine, America’s top brass is very concerned for American hegemony and vehemently argues for “necessary preparations” and strategic activities pursued in order to preserve it as well as to counter these new threats, namely Russia and China.