By Joseph Lee BBC News Around 1,000 people crossed the Channel by boat to reach the UK on Thursday, a new record for migrant Channel crossings in a single day. Five lifeboats and four Border Force vessels escorted groups to Dover as a period of calm and mild weather made the journey less risky.

The Kremlin has strongly denied suggestions that Russia is planning to invade Ukraine, after reports emerged that officials from the US had warned their counterparts in Europe that Moscow is considering a “military operation.” Speaking to the press on Friday, Kremlin spokesman Dmitry Peskov slammed the suggestion as groundless.

Belavia stops accepting Iraqis, Syrians and Yemenis on flights from Turkey to Belarus

Belavia stops accepting Iraqis, Syrians and Yemenis on flights from Turkey to Belarus

MINSK, November 12. /TASS/. Belavia, the Belarusian national airline, has stopped taking on board citizens of Iraq, Syria and Yemen from Turkey to Belarus. “In accordance with the decision of the competent Turkish authorities, starting November 12, 2021, the citizens of Iraq, Syria and Yemen will not be accepted to be transported on flights from Turkey to Belarus,” the press service’s message reads.

Prepare for Russian invasion of Ukraine, US warns European allies

Prepare for Russian invasion of Ukraine, US warns European allies

Joe Biden, the US president discussed the Ukraine situation with Ursula von der Leyen, the European Commission president, at the White House on Wednesday. Kamala Harris, the US vice president, met Emmanuel Macron, the French president, in Paris this week.

Strangely enough there are problems with electricity now in ukraine, for example traffic lights are switched off and there are intermittent little blackouts. Russia has more aces up their sleeve than the west thinks.

As for the situation at the polish border, as i wrote before luka and vova once again front-runned the NATO crazies.Expect more funny stuff in the next few days before NATO will back down again like last year in february.

And of course like always Mr. Mercouris does not understand one thing: poland, like ukraine is a deeply christian country, unlike the demoralized countries in the west. A thousand muslim migrants at the border are a problem. Luka, the old fox, knows this. This will create another rift between the eastern european christian countries and the demoralized western EU members. Good job, luka and vlad.

Unfortunately, Mr. mercouris also does not understand what Dimitri Peskov meant when he talked about russia’s territorial integrity being in danger. What he refers to is not Crimea, but the buildup of NATO troops and weapons systems in Ukraine under the guise of ” training missions”. This is what president Putin said very clearly at the Valdai conference. The possibility od NATO missiles being stationed in Kharkiv is a problem for russia. The idea that russia just sits idly by while that happens only shows how crazy and irresponsible the NATO idiots are. 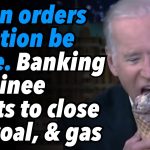