Authored by Tim Black via Spiked-Online.com:

Over the summer, Sweden’s defence commission warned that ‘a larger European conflict could start with an attack on Sweden’. Politicians and military planners clearly agreed – in June, 22,000 Swedish volunteer soldiers were called up for the largest surprise exercise since 1975.

The protagonist of this European conflict wasn’t named as such, but it didn’t need to be. Because every politician and civil servant, every pundit and broadcaster, just knows that the protagonist is Russia. Because that is the function ‘Russia’ – alongside associated dread words such as ‘Vladimir Putin’ or ‘Russian oligarchs’ – now plays in the political imagination of Western elites. It is the catch-all, go-to explanation for their travails. The assumed military demiurge of global instability. The real, albeit dark and hidden, source of populist discontent.

Yet while Russia-mania is widespread among today’s political and cultural elites, it is not uniform.

For an older, right-wing section of the Western political and media class, otherwise known as the Cold War Re-Enactment Society, Russia looms large principally as a military, quasi-imperial threat. Jim Mattis, the former US marine and general, and now US defence secretary, said Russia was responsible for ‘the biggest attack [on the world order] since World War Two’. Whether this is true or not is beside the point. What matters is that Russia appears as a military aggressor. What matters is that Russia’s actions in Ukraine – which were arguably a defensive reaction to NATO and the EU’s expansion into Russia’s traditional ally – are grasped as an act of territorial aggrandisement. What matters is that Russia’s military operations in Syria – which, again, were arguably a pragmatic intervention to stabilise the West-stoked chaos – are rendered as an expression of imperial aggression. What matters is that Russian state involvement in the poisoning of the Skripals in Salisbury – which, given its failure, proved Russian incompetence – is presented as ‘part of a pattern of Russian aggression against Europe and its near neighbours, from the western Balkans to the Middle East’, to quote Theresa May.

And it matters because, if Russia is dressed up as the West’s old Cold War adversary, just with a new McMafia logo, then the crumbling, illegitimate and increasingly pointless postwar institutions through which Western elites have long ordered the world, suddenly look just that little bit more solid, legitimate and purposeful. And none more so than NATO.

This is why NATO has this year been accompanying its statements warning Russia to ‘stop its reckless pattern of behaviour’ with some of the largest military exercises since the fall of the Berlin Wall nearly three decades ago. Including one in November in Norway, involving 50,000 troops, 10,000 vehicles, 250 aircraft and 60 warships.

Then there is the newer form of Russia-mania. This has emerged from within the political and cultural elite that came to power after the Cold War, ploughing an uninspiring third way between the seeming extremes of the 20th century’s great ideologies. Broadly social democratic in sentiment, and elitist and aloof in practice, this band of merry technocrats and their middle-class supporters have found in ‘Russia’ a way to avoid having to face up to what the populist revolt reveals – that the majority of Western citizens share neither their worldview nor their wealth. Instead, they use ‘Russia’ to displace the people as the source of discontent and political revolt.

We have seen this play out in the US in the continuing obsession, fronted by Troll-Finder General Robert Mueller, over alleged Russian meddling in the 2016 US presidential election. And the same obsession has emerged in the UK, too, with politicians and pundits claiming that a shadowy network of Russian influence tipped the EU referendum in favour of Leave.

It is never quite clear how the ‘Russians’ or ‘Putin’ did all this, beyond Facebook ads and decidedly dubious talk of so-called dark money. But then clarity is not the point for this stripe of Russia-maniac. He or she simply wants to believe that Trump or Brexit were not what they were. Not expressions of popular will. Not manifestations of popular discontent. Not democratic exercises.

No, they were the result, as one Tory MP put it, of ‘the covert and overt forms of malign influence used by Moscow’.

Or, in the words of an Observer columnist, ‘a campaign that purported to be for the “left behind” was organised and funded by men with links across the global network of far-right American demagogues and kleptomaniac dictators such as Putin’.

Such has been the determination to blame ‘Russia’ or ‘Putin’ for the political class’s struggles, that in August Tom Watson, Labour’s conspiracy-theory-peddling deputy leader, called for a public inquiry into an alleged Russian Brexit plot. ‘[Voters] need to know whether that referendum was stolen or not’, he said.

Such a call ought to be mocked. After all, it is absurd to think ‘Russia’, ‘Putin’ and the trolls are the power behind every populist throne. But the claims aren’t mocked – they’re taken as calls to action. Think of anything viewed as a threat to our quaking political and cultural elites in the West, and you can bet your bottom ruble that some state agency or columnist is busy identifying Putin or one of his legion of bots and trolls as the source. The gilet jaunes protests in France? Check. Climate change? Check. Italy’s Five Star Movement? Check.

And all this from a nation with a GDP equivalent to Spain, an ageing, declining population, and a failing infrastructure. The reality of Russia is not that of a global threat, but of a struggling state. Russia is weak. Yet in the minds of those clinging desperately to the status quo, ‘Russia’ has never been more powerful.

One way of distracting the public – regardless of country – of what is really going on in respective nations. Accuse others of that which you are guilty of. It has worked before so why not today?

If only the western public were not so distracted and propagandized and stupidified! Accusing others of that which you are guilty is one of the symptoms of Narcissistic Personality Disorder. . Other signs and symptoms of NPD include: – an exaggerated sense of self-importance – a sense of entitlement and requiring constant, excessive admiration – an expectation to be recognized as superior even without achievements that warrant it – exaggerated claims of achievements and talents – preoccupation with fantasies about success, power, etc. – a belief in its/one’s superiority – a tendency to monopolize dialog and belittle whatever is perceived… Read more »

As shown in this article, the American intelligence network has developed the ability to appear as though their malware is from Russia:

The entire narrative about Russian influence in 2016 is highly suspicious given the CIA’s capabilities.

The elite fears the loss of their privileges. Because they cannot accuse the people of wanting to hold the elite responsible for their actions because that is the foundation of democracy, they project their fear of the people onto Russia. Such a displacement absolves them from all responsibility. 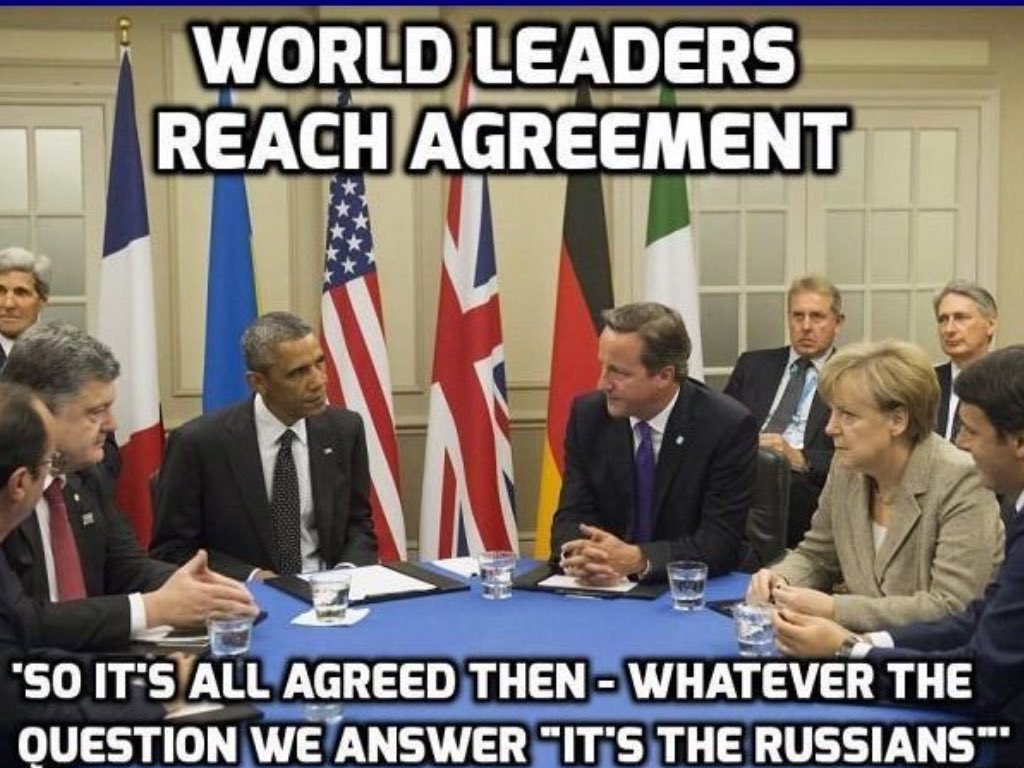 What I love most is that it invariably brings into focus how good Russia is compared to the pathetic desperate Zio-lying hypocrite West. People today know the false accuser is always the fake abuser!!

And all this from a nation with a GDP equivalent to Spain, an ageing, declining population, and a failing infrastructure
had the author of this artikel his head up his rectum for the last couple of years?
Russia has been building new roads railroads airports housing at the same rate as the US bombs