The Duran’s Alex Christoforou and Editor-in-Chief Alexander Mercouris discuss the disappearance of Yulia and Sergei Skripal. Where did they really go? Are they being protected or being held as prisoners? Why can we not see any proof of life?

The Salisbury Poisonings is a BBC drama about how the city of Salisbury and its people found themselves at the centre of an international incident back in 2018.

Life in the city and in some surrounding areas ground to a halt after two Russians attempted to assassinate Sergei Skripal, another Russian, and his daughter Yulia in March.

The men used a “high purity” strain of Novichok – “newcomer” in Russian – a military-grade nerve agent that was developed by the Soviet Union during the ’70s and ’80s.

Sergei had begun working as a spy for Britain from the mid-1990s onwards, which for Russian president Vladimir Putin was the ultimate betrayal. He was arrested by the FSB (who replaced the KGB after the fall of the USSR) and became a UK citizen after being exchanged for Russian agents in a “spy swap” in 2010.

During a forum in Moscow in October 2018, the politician described him as a “scumbag” and a “traitor”.

Putin has always denied that the Kremlin was behind the events in Salisbury, but the British government believe that the two men were agents from Russia’s military intelligence outfit, the Main Intelligence Directorate (GRU).

Anatoly Chepiga and Alexander Mishkin both worked for the GRU, the former a colonel and the latter a military doctor, and travelled to the UK under false names.

When later quizzed about why they visited Salisbury, they cited the cathedral as the main draw.

There was one death as a result of what happened, and it was neither Sergei nor Yulia.

Dawn Sturgess, a 44-year-old mother-of-three, died at the end of June after coming into contact with Novichok.

Four months after the attack, Dawn’s boyfriend Charlie Rowley found a plastic container with what he thought was a bottle of perfume inside a charity shop bin. He gave it to Dawn as a gift, who sprayed the contents on her wrists. Her health quickly and severely deteriorated.

Charlie, who also fell ill and was taken to hospital, managed to survive, but is still dealing with the psychological and physical fallout.

It was reported in January 2019 that Sergei and Yulia were still believed to be living in southern England.

After they were discharged from hospital in Salisbury – Yulia left after a month, and her father followed her a month later – they were resettled in an MI6 safe house.

“There are lots of reasons why they would stay in Britain and it’s notable that in his recent Panorama interview, Sir John Sawers, the former chief of the Secret Intelligence Service, when asked whether they were still in this country, said the UK authorities would continue to look after people in such a position,” BBC journalist Mark Urban told The Telegraph.

According to sources, the pair were still in contact with close friends and even continued working for the British intelligence services. But they kept a low profile and reportedly changed their appearances.

The following photo of Yulia was taken during an interview with a journalist back in May 2018, but that is the last known public image of her, and there are none, understandably, of her father. 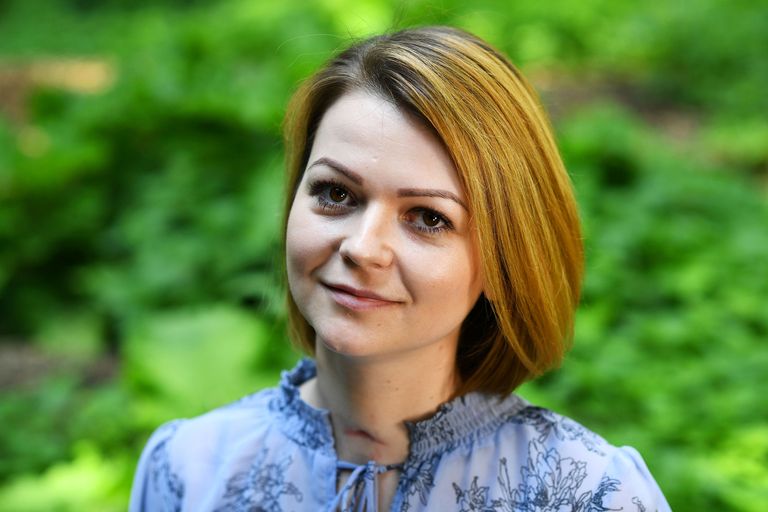 The Sunday Times Magazine has since reported that the Skripals have moved to New Zealand.

According to a senior government source, Sergei and his daughter have been given new identities and various other protections to help them start over.

The article also said that their former neighbours in Salisbury, Ross and Mo Cassidy, who feature in the dramatisation, received a Christmas card from the pair last year.

“It’s nice to know they are thinking of us,” said Ross. “But I don’t expect we’ll ever see them again.”

The end of The Salisbury Poisonings confirms that.

Ross also told the Sunday Times that Sergei didn’t use a different name when living in Salisbury.

“I’ll never for the life of me understand why they didn’t give him a pseudonym,” he said.

It’s unsurprising, then, that the spy would keep a watchful eye over his street from the comfort of his armchair.

“Sergei saw you coming before you ever saw him,” added Ross.

The Salisbury Poisonings is available to stream now on BBC iPlayer.

What a load of Bs! British propaganda. Are the Skiprals still alive? I doubt it very much.
Why is the Duran printing uncritically, this handout from the British Foreign Office?

Have you watched the video?

Eric Zuessse’s brilliant article is analyzed very well in the video. The above text gives another impression. At the center of the video is really Eric Zuesse’s text, not any western mainstream media junk.

If have read that their family in Russia never received a sign of their life after the poisoning. They used to contact every week before that. (if this is correct)

… and apparently, Yulia was also engaged to be married back in Russia.

The Rule of Law is sliding downwards in most countries, and very few are improving: https://worldjusticeproject.org/rule-of-law-index/

It’s worth watching the previous Duran videos on the Skripals such as “CIA director and NYT accidentally expose Skripal poisoning hoax”. 60 Russian diplomats were expelled from the US and a handful from the usual suspects in the EU over this hoaxical incident-that-wasn’t. Anything goes when it comes to maligning Russia.

I’m not sure if the latest Duran video is a case of the plot thickens or the plots sicken, but it’s probably both.

What totally convinced me that Julia was being held against her will and incommunicado was that she never even responded to appeals from her family about what to do about her much loved dog who was in kennels. No she and her father are dead. You can bet that if they were alive and really had been poisoned by Russia, they would have been paraded endlessly before the Press. We know Sergei had sounded out the possibility of his returning to Russia – and no doubt his British handlers knew about this, even if they didn’t put him up to… Read more »

MI6 stands for Malevolent Institution no. 6. The UK has many of them, all numbered sequentially.

Once the polar bifurcation is complete, the UK is going to be very sorry it bet the whole enchilada on one horse and maybe even a lame duck.

Will the EU ever man up?
Reply to  Casino Royale

Once the EU is cast free from UK’s malfeasance, they can either revert to their own or play it cagey by walking the middle ground, a beak dipped in each pool, ehr…pole that is.

Of course, quarantining Poland and the Baltic States will have to be on their plate, else might as well just toss in the towel and just continue crying fowl.

Why didn’t this link to Eric zeusse article. Links to very different one

And most importantly, to what end did this all take place? At best its the worst South Park episode ever, at worst it killed 3 people for absolutely no political benefit to anyone, which is what the “good side?” hoped to gain immensely from it appears?

Why for the life of The Duran is there a link to POS Salisbury Poisoning fantasy show made by BBC that sounds like a promotion of the UK fantasy world? I assume you made a mistake which is okay as you’re awesome and work tirelessly to be top ten world wide in your reporting hands down. If the left stream saw this though that be elated in reporting you are on their side, haha. As if you guys choose sides, which is what I love about you.

Alex and Alexander analyse in detail Eric Zuesse’s brilliant article about the case, it is printed here in the Duran. The link is missing. It should be placed in the article, too. Thank you.

As Alexander Mercouris said, can you imagine the scale of outrage amongst our parliamentarians and Lamestream media, if it had been a British Father & daughter who’d been poisoned in Russia and then ‘disappeared’ by the Russian authorities.

We’d never hear the end of it.

Our media and political establishment are as high on hypocrisy as they are rock bottom on free speech and democratic freedoms.