Wow. The moment President Trump found out that RBG died. Don’t ever try to tell me this man doesn’t care. pic.twitter.com/DpbJ7So4Tl

President Trump spoke briefly with the press when departing the White House for a campaign rally in Fayetteville, North Carolina. When asked about the next nominee to the Supreme Court, he said he expects the nominee will be announced “next week,” and will most likely be a woman.

President Trump addresses the death of Justice Ginsburg,  saying the nation mourns her loss. He then says, “So Article II of the Constitution says presidents shall nominate justices to the Supreme Court.” The crowd begins to chant “fill that seat,” to which the president says “there’s a lot of genius in those chants.” 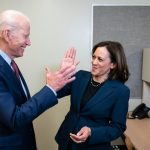