The last part of this piece’s byline is the most important. The West is destroying its own economy by way of Russia, and it is doing so in full knowledge of the outcome.

“You will own nothing, and you will be happy.” – Claus Schwab

Well, Russia is not interested in the Great Reset. So, as the Great Resetters are pounding Western civilization into subservience and poverty, President Putin does not pull his punches when he says what is really happening.

This is truly amazing. President Vladimir Putin is probably the straightest shooter on the world stage, and for that the delusional, perverted leaders of the West are determined to cripple him and his country. Yet, the only lasting damage falls on themselves – as President Putin said it would.

In short, the economic sanctions taken by the West against Russia are blowing up in the face of the Western nations.

Except, not really. This isn’t an accident; Ukraine is simply the perfect foil for the Great Reset and the biggest money grab to be seen in history. Ukraine is also getting huge handouts from the West that are reportedly being used simply to enrich a select few Ukrainians… all this as that country’s people experience the first “benefits” of the Great Reset – displacement, homelessness, poverty, disease and death.

It is increasingly evident that if the peoples of the Western world do not want to find themselves under a tyranny that makes Hitler and Stalin look like Jefferson and Washington… we need to act. Not just with our votes, either. That may not be anywhere close to enough.

Now, a bit of a disclaimer (but just a bit!) – the second Redacted video is an advertisement, but it is an extremely well-researched and relevant advertisement, so I am treating this as half-news and half-get prepared instructions. I hope that the readers will forgive this – it is not my intention to plug any organization, but at the same time, the concern expressed here is absolutely real.

Talkin’ about a revolution…

And while talking about it, let’s make the videos on display a trifecta. This story is worldwide. Russia is the single European/Western power saying “no!” to The Plan.

It is good to live here.

Just an update – the world is slowly becoming wise to the Ukrainian money con job. From our own Editor-in-Chief, Alexander Mercouris – watch from this video’s starting point [11:09]:

The “ONLY” scum who benefit from Ukraine weapons are these two Cunts ! 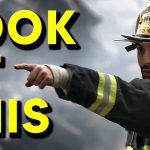