RT CrossTalk host Peter Lavelle and The Duran’s Alex Christoforou discuss the results of the Putin-Kim summit in Vladivostok, Russia, aimed at boosting bilateral ties between the two neighboring countries, as well as working to contribute to a final peace settlement on the Korean peninsula.

Putin’s meeting with Kim may prove to be a pivotal diplomatic moment, as North Korea continues to work towards normalizing ties with the U.S. amidst ongoing denuclearization talks with the Trump White House.

Such guarantees would need to be offered within a multinational framework, he added, following talks near Vladivostok in Russia’s far east.

Mr Putin said North Korea’s leader was “fairly open” and had “talked freely on all issues that were on the agenda”.

The meeting followed the breakdown of talks between the US and North Korea in February, when Mr Kim met US President Donald Trump in the Vietnamese capital Hanoi.

Those talks reportedly stalled over North Korea’s demand for full economic sanctions relief in return for some denuclearisation commitments – a deal the US was not willing to make.

Speaking after the talks on Thursday, Mr Putin said he wanted to see full denuclearisation on the Korean peninsula.

But he said this could only be achieved through respect for international law.

Mr Kim greeted Russian officials warmly when he arrived in Russia on Wednesday.

The North Korean leader was entertained by a brass band in Vladivostok before he got inside a car flanked by bodyguards, who – in now familiar scenes – jogged alongside the vehicle as it departed.

What do we know about the summit?

According to the Russian presidential spokesman, Dmitry Peskov, the Kremlin believes the six-party talks on North Korea, which are currently stalled, are the only efficient way of addressing the issue of nuclear weapons on the peninsula.

Those talks, which began in 2003, involve the two Koreas as well as China, Japan, Russia and the US.

“There are no other efficient international mechanisms at the moment,” Mr Peskov told reporters on Wednesday.

“But, on the other hand, efforts are being made by other countries. Here all efforts merit support as long as they really aim at de-nuclearisation and resolving the problem of the two Koreas.”

What do both sides want?

This visit is being widely viewed as an opportunity for North Korea to show it has powerful allies following the breakdown of the talks with the US in February.

The country has blamed US Secretary of State Mike Pompeo for the collapse of the Hanoi summit. Earlier this month North Korea demanded that Mr Pompeo be removed from nuclear talks, accusing him of “talking nonsense” and asking for someone “more careful” to replace him. 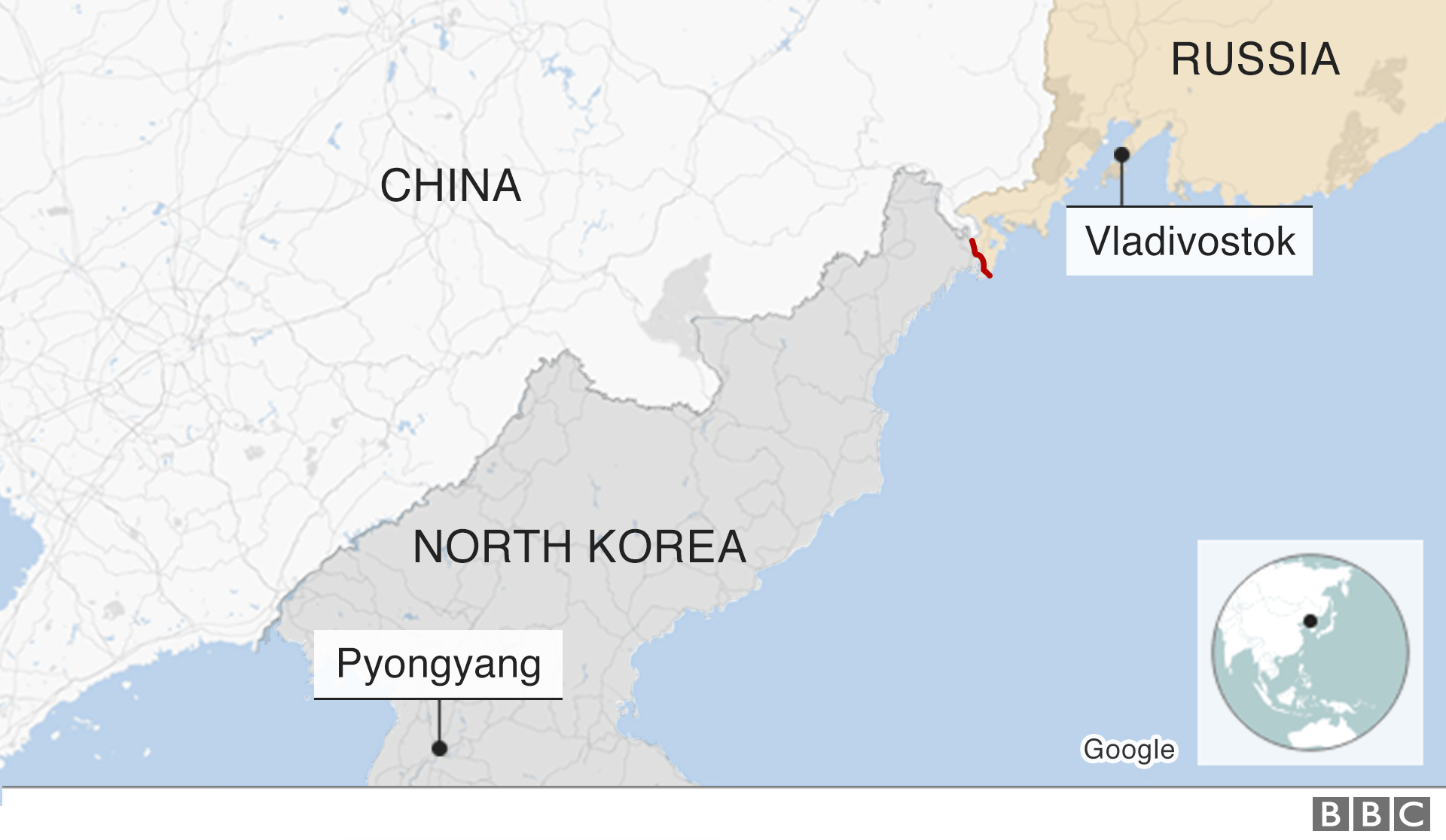 The summit is also an opportunity for Pyongyang to show that its economic future does not depend solely on the US. Mr Kim may try to put pressure on Moscow to ease sanctions.

Analysts say the summit is an opportunity for Russia to show that it is an important player on the Korean peninsula.

President Putin has been eager to meet the North Korean leader for quite some time. Yet amid the two Trump-Kim summits, the Kremlin has been somewhat sidelined.

Russia, like the US and China, is uncomfortable with North Korea being a nuclear state.

How close are Russia and North Korea?

During the Cold War, the Soviet Union (of which Russia is the main successor state) maintained close military and trade links with its communist ally, North Korea, for ideological and strategic reasons.

After the Soviet Union collapsed in 1991, trade links with post-communist Russia shrank and North Korea leaned towards China as its main ally.

Under President Putin, Russia recovered economically and in 2014 he wrote off most of North Korea’s Soviet-era debt in a major goodwill gesture.

While it is arguable how much leverage Russia has with the North today, the communist state still regards it as one of the least hostile foreign powers.

Well they will have to adjust to the situation, because the evil wishers will not go away. Putin and Kim will have to work around them, somehow. I am sure they will manage.

Not quite correct…if only the entire US could be removed from that area, allowing the two Koreas to sort out things.

They cannot be simply “removed”. How could they be “removed”, if they do not go away by their own free will? Certainly Kim Jong-Un will not use his nuclear arsenal to drive those unwanted “western partners” out.

The BBC is still lying: North Korea asked for a PARTIAL removal of sanctions in exchange for its partial denuclearisation and having stopped ballistic and nuclear testing for many months.

BBC is still lying and the sun is still rising. Go figure.

I can see Pompeo teaching Evolution at Oral Roberts University and Bolton standing on a bucket in Piccadilly Circus, beating a drum and warning passersby that Iranians are under their beds.

A Tuppence for Pence's thoughts
Reply to  The Dynamic Duo

Pence is trying to convince Trump that emergency funds are needed to replace Russian rocket engines before Rapture is upon us.

Paradise on Parade
Reply to  A Tuppence for Pence's thoughts

Elliot Abrams has asked Venezuelans to imagine a world without hunger and where there’s a Kentucky Fried Chicken bucket in every favella, delivered by Jeff Bezos’ flying drones to boot, if only they’d sodomize Maduro with Bolivar’s bayonet.

America is a wonderful place. It’s one of the few nations on Earth where you can poke fun at its leaders without being beheaded for sedition while bestowing most favored ally status to nations that do.

Bolton Pompeo and Pence
One thin one fat one dense
These treacherous crooks
So different in looks
Make all of us equally tense!

President Trump, take command of your administration. Fire these fools!

Fire them? He hand-picked them for their hand-job skills.

Kim Jong-un is leaving Vladivostok in his train:

Let me rearrange your headline: “War on Korean Peninsula within reach, if only Pompeo & Bolton can remove Trump”. Yep, that’s better.