Authored by Pat Buchanan via Buchanan.org:

“The death of John McCain will leave Congress without perhaps its loudest voice in support of the robust internationalism that has defined the country’s security relations since World War II.”

Certainly, the passing of the senator whose life story will dominate the news until he is buried at his alma mater, the Naval Academy, on Sunday, leaves America’s interventionists without their greatest champion.

No one around has the prestige or media following of McCain.

And the cause he championed, compulsive intervention in foreign quarrels to face down dictators and bring democrats to power, appears to be a cause whose time has passed.

When 9/11 occurred, America was united in crushing the al-Qaida terrorists who perpetrated the atrocities. John McCain then backed President Bush’s decision to invade Iraq in 2003, which had no role in the attacks.

During Barack Obama’s presidency, he slipped into northern Syria to cheer rebels who had arisen to overthrow President Bashar Assad, an insurgency that led to a seven-year civil war and one of the great humanitarian disasters of our time.

McCain supported the expansion of NATO into Eastern Europe and the Baltic, right up to Russia’s border. When Georgia invaded South Ossetia in 2008, and was expelled by the Russian army, McCain roared, “We are all Georgians now!”

He urged intervention. But Bush, his approval rating scraping bottom, had had enough of the neocon crusades for democracy.

McCain’s contempt for Vladimir Putin was unconstrained. When crowds gathered in Maidan Square in Kiev to overthrow an elected pro-Russian president, McCain was there, cheering them on.

He supported sending arms to the Ukrainian army to fight pro-Russian rebels in the Donbass. He backed U.S. support for Saudi intervention in Yemen. And this war, too, proved to be a humanitarian disaster.

John McCain was a war hawk, and proud of it. But by 2006, the wars he had championed had cost the Republican Party both houses of Congress.

In 2008, when he was on the ballot, those wars helped cost him the presidency.

By 2016, the Republican majority would turn its back on McCain and his protege, Sen. Lindsey Graham, and nominate Donald Trump, who said he would seek to get along with Russia and extricate America from the wars into which McCain had helped plunge the country.

Yet, while interventionism now has no great champion and has proven unable to rally an American majority, it retains a residual momentum. This compulsion is pushing us to continue backing the Saudi war in Yemen and to seek regime change in Iran.

Yet if either of these enterprises holds any prospect of bringing about a more peaceful and prosperous Middle East, no one has made the case.

While the foreign policy that won the Cold War, containment, was articulated by George Kennan and pursued by presidents from Truman to Bush I, no grand strategy for the post-Cold War era has ever been embraced by a majority of Americans.

As for the Bush II crusades for democracy “to end tyranny in our world,” the fruits of that Wilsonian idealism turned into ashes in our mouths.

But if the foreign policy agendas of Bush I and Bush II, along with McCain’s interventionism, have been tried and found wanting, what is America’s grand strategy?

What are the great goals of U.S. foreign policy? What are the vital interests for which all, or almost all Americans, believe we should fight?

“Take away this pudding; it has no theme,” said Churchill. Britain has lost an empire, but not yet found a role, was the crushing comment of Dean Acheson in 1962.

Both statements appear to apply to U.S. foreign policy in 2018.

We are bombing and fighting in Afghanistan, Iraq, Syria, Libya and Yemen, partly John McCain’s legacy. Secretary of State Mike Pompeo has sent a virtual ultimatum to Iran. We have told North Korea, a nuclear power with the world’s fourth-largest army, either to denuclearize or the U.S. may use its military might to get the job done.

We are challenging Beijing in its claimed territorial waters of the South China Sea. From South Korea to Estonia, we are committed by solemn treaty to go to war if any one of dozens of nations is attacked.

Now one hears talk of an “Arab NATO” to confront the ayatollah’s Iran and its Shiite allies. Lest we forget, ISIS and al-Qaida are Sunni.

With all these war guarantees, the odds are excellent that one day we are going to be dragged in yet another war that the American people will sour upon soon after it begins.

Where is the American Kennan of the new century?

War hero or war monger. He was very bad for America

McCain was good for the economy. He help pump military spending sky high and Trump aided and abetted the plan. So Buchanan won’t have to look far for McCain’s replacement. Lindsey Graham is ready.

And the next Kennan, minus a white paper, is in the White House.

“What are the vital interests for which all, or almost all Americans, believe we should fight”??? Who says Americans want to “fight”? Why must there always be a “fight”? Why can’t America do peace instead of war? If it doesn’t learn to live peacefully, then it doesn’t deserve to exist.

Dear Pat Buchanan, I am confused and sad, because you have written the following: ” When 9-11 occurred America was united in crushing the al Qaida terrorists who perpetrated the atrocities.” Surely, a man as bri8ghtr as you does not believe the phony false Flag pretext 9-11 which started the un-going wars in Afghanistan and elsewhere. How can you live with yourself. I think you should speak with your parish priest and seek absolution for your folly. Think of all the human beings your acceptance of Bush and Cheney”s lies has destroyed! Isn”t there one honest person in the USA.… Read more »

I’m so relieved to read that No Name will not be buried in Arlington Cemetery.

Sick and tired of McCain and his ilk . I feel sick .Time to move on .

Good riddance to one of the worst human beings to ever infect Congress, and congratulations to all Americans who hate America’s recent addiction to constant needless war. 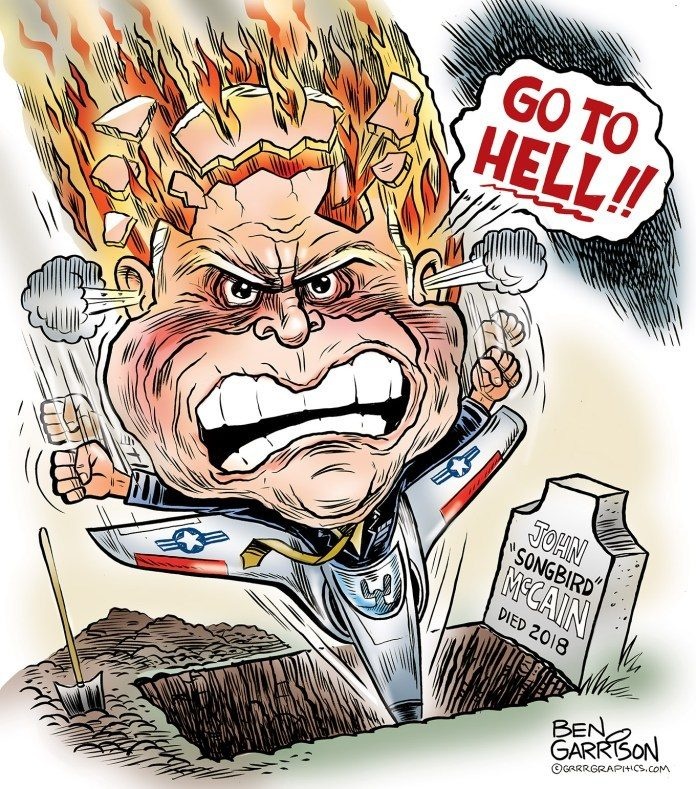 Excellent article about McCain. He worked for war constantly. He was an open borders Democrat wearing the mask of the GOP so he could orchestrate wars which were his main focus in life. Hopefully no one will replace him.