Right now, 8/24/21, 12:41 EST, a drama is unfolding that will tip the hand of the Taliban at a crucial moment and the Duran can do something about it. First let’s look at some aspects of the situation.

The MSM in the US and elsewhere is focused on the disaster of the Kabul evacuation. At the same time, leading US think tanks are slipping into some kind of narco dream state. The last Asia Society meeting on Afghanistan was positively dreamy word bubbles about famine, drought and a bleak future. The rest border on Imperial dreams partly covered by the Duran. But the Chinese have not yet recognized the self declared emirate and have taken a wait and see attitude. They have officially said that they want to see actions and will not be swayed by mere words. They have also re iterated their interest in seeing peace, stability, and reconciliation with their former national foes which is basically all of the non Pasthtun population.

But the Taliban have, so far, not been able to control their own people. There are reports of house to house searches for people who worked with NATO, robberies and summary executions. But the key behavior which has really tipped their hand is almost never mentioned in the MSM. Taliban cadres have been rushing to the Panshir Valley to wipe out the Tajik resistance that has gathered there in the wake of the collapse of the Ghani government. This rush to a fight is exactly what has the Chinese and, no doubt, the Kremlin worried.

This is exactly what nobody wants to see happen. It means more of the same kind of idiocy that the Taliban implemented 20 years ago and over the duration of this war. How is that going to work in a Belt and Road integrated environment? But no western news organ has focused on the story in Panjshir. It is an ideal news story. It has news elements of conflict, consequence and drama. “If it bleeds, it leads” is suddenly forgotten by so called journalists. If you want to see any video of it, you have to find Indian news organs. Nobody will touch it.

Yet, it is crucially important. Ahmad Massoud, son of the legendary Ahmad Shah Massoud is there. Amrullah Saleh, former Afghan Vive President and probably the most capable Afghan leader alive is there. Together they are calling on the Taliban for a negotiated settlement. They have been rebuilding the old Panjshir defense militia which beat back both the Soviets and the Taliban.

If the Taliban take them on militarily, it will be the certain rejection of the principles that the slick Taliban media have been giving lip service to. This needs to be a focus of a Duran video. A lot of people are watching. If the Taliban move forward and basically perform an ethnic cleansing of the Panjshir, the world will know who they are. If, on the other hand, focus and attention can be brought to bear on this situation in real time, a massacre can be avoided.

People are always urged by the media to feel sympathy for the ones who helped NATO, but never for its victims. Does anyone remember the many wedding parties in Afghanistan that were bombed? Why is nothing being done for the Palestinians or for the Amazigh? Why are we still supporting the evil-doers, sending weapons to countries like Saudi Arabia and Israel who are doing the actual killing right now? The R2P doctrine has always failed, but simply feeling responsible as to whom we sell our weapons to is too farflung for many.

This article seems to state that the Taliban will definitely break all the promises it has made. Maybe they will keep their word, or maybe not. Of course there will be some breaches, but it will take months to determine what their true intentions are. The Panshir Valley appears to be located rather deep within Afghanistan, so they obviously will not simply allow the people there to secede from the nation. That would be like the US state of Utah declaring an independent Mormon Republic. Such things do just not happen. It is too early to condemn the Taliban, and… Read more »

The sensible people should understand that you are full of sh.t…

Helga I. Fellay
Reply to  blues

I agree with you, blues.

You’re late to the party, old news. Massoud is a CIA asset, Anglo/Zionists not giving up. They want a civil war and future instability. 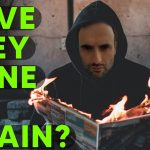 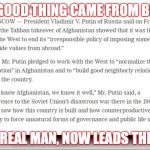