Recently, workers at an animal shelter in Chelyabinsk, the “Gateway to Siberia” in the shadow of the mighty Ural mountains, were surprised to find a new furry friend – a dog who looks strikingly like a bear.

Seeing as it is a well-known fact that bears roam the streets of Moscow, he is likely to find a new home very quickly. In all seriousness, bears do NOT roam the streets of any Russian city, however, this poor chap was found abandoned by local workers at “Nash Dom” (Our House), animal shelter, and they were amazed by his appearance.

“This Miracle of Nature”, as they called him on their VK page, bears a strong resemblance to Russian Brown bear, if you’ll excuse the pun, and so they named him Medvebaka or “Bear-dog”, coming from the word Medved (Bear) and Sabaka (Dog).

Some experts are still uncertain of his exact breed, though others currently hypothesize partial chow-chow ancestry.

Seeing as dogs are man’s best friends, and bears are a national symbol of Russia, hopefully, Medvebaka will soon find a loving home.

Due to suffering abuse, an animal activist called Igor has noted Medvebaka’s “difficult character”, and the shelter has said he will need time to adapt to socialization. Though Medvebaka suffers a great deal of stress and anxiety from his trauma, his future is optimistic. 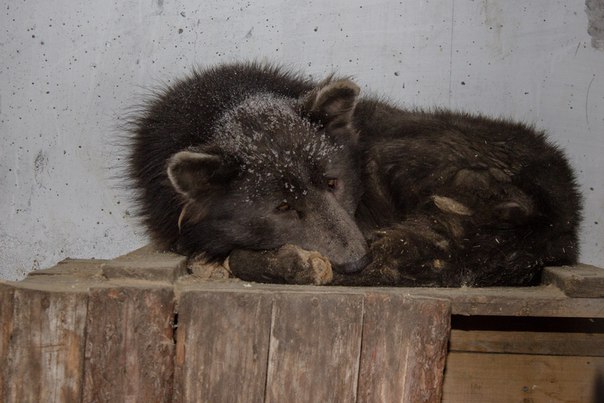 Just like the Russian bear and the people he represents, it is the nature of Russia to teach all her children to learn how to survive anything, no matter what. Russians always loved their dogs, and the Russian soul understands what it means to suffer. God willing, Medvebaka will be in good spirits and will soon find a new home!