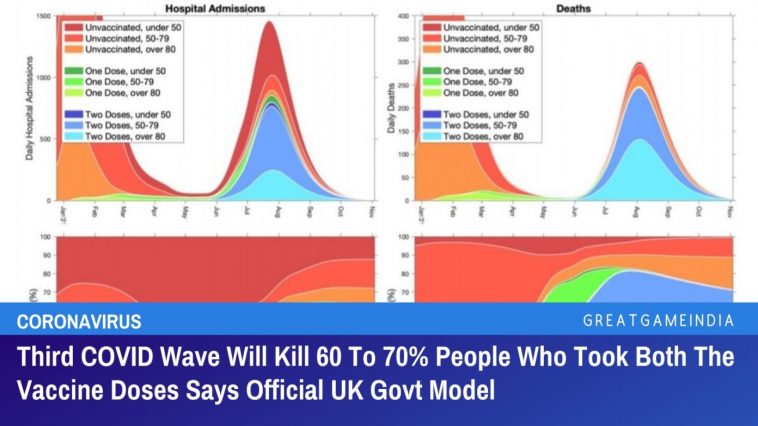 According to projections by UK’s top modelling agency the thrid wave of COVID-19 spike will hospitalize and kill 60 to 70% of those people who took both the vaccine doses.

The paper suggests that the resurgence in both hospitalisations and deaths will dominated by those who have received two doses of the vaccine, comprising around 60% and 70% of the wave respectively.

The modelling (read below in full) was presented to the UK’s top scientific advisory body Sage by one of its sub groups, the Scientific Pandemic Influenza Group on Modelling, Operational (SPI-M-O).

This committee of academics has done modelling work throughout the pandemic and has looked at the impact vaccination will have on hospital admissions, infections and deaths.

Its findings suggest that a third wave is inevitable but that the size of the spike in cases depends on the effectiveness of vaccines, the speed at which restrictions are eased and the impact new variants have on transmission and illness.

It suggests that the resurgence in both hospitalisations and deaths will be “dominated by those that have received two doses of the vaccine”.

“Maintaining a large reduction in transmission from such measures after Step 4 [England’s plans to remove all restrictions from June 21] is taken is almost certain to reduce the size of the subsequent resurgence.

This latest modelling reinforces this finding, as lower adherence to baseline measures and the resulting increased transmission could lead to a peak close in scale to that seen in January 2021.”

The paper looks at a range of possibilities what we can expect from Covid as we ease restrictions going into the summer.

It takes into account a range of difference sources including modelling from the University of Warwick, Imperial College London and London School of Hygiene & Tropical Medicine.

“Scenarios with little transmission reduction after step 4 [full lifting of restrictions planned for June in England] or with pessimistic but plausible vaccine efficacy assumptions can result in resurgences in hospitalisations of a similar scale to January 2021.”

The paper suggests that the resurgence in both hospitalisations and deaths will dominated by those who have received two doses of the vaccine, comprising around 60% and 70% of the wave respectively.

“The resurgence in both hospitalisations and deaths is dominated by those that have received two doses of the vaccine, comprising around 60% and 70% of the wave respectively.

This can be attributed to the high levels of uptake in the most at-risk age groups, such that immunisation failures account for more serious illness than unvaccinated individuals.”

Results of the central scenario of the Warwick model, showing the age and vaccine status of those admitted to hospital (left) or dying (right) over time. Top plots are absolute numbers, bottom plots are proportions.

As soon as the model was made public Fact-checkers tried to debunk and downplay the fact that 60 -70% of those who took 2 doses on the vaccines will dominate the third wave.

Here is the verdict by Grace Rahman of Full Fact:

“Modelling suggests that when a third wave occurs, hospitalisations and deaths will mostly be in those who’ve been vaccinated. This is because so many vulnerable people will have been vaccinated by then, not because the vaccine is harming them.”

And yet, the fact-checker insists vaccines have nothing to do with the third-wave.

However, we will let our readers decide. Read the document HERE.

This is bioterrorism on an unprecedented scale. Horrendous times we live in.

“Children as young as 6 months old now in COVID-19 vaccine trials” Also, what he says in the article about upcoming vaccine deaths is backed up by Spanish doctor Maria Jose Martinez Albarracin. Vaccine-triggered ‘pathogenic priming’ is the primary cause for the inflammatory syndrome (indistinguishable from what they’re calling “Covid-19”) that will kill people. She expects some 20-30% of the Covid-vaccinated to die in the autum, as sunlight diminishes and “flu season” starts. This will be used to implement a full-on martial law, in which we’re devoid of any freedoms at all. The phenomenal death toll will render any opposition… Read more »

Yes, it is quite awful – these jibby-jabbys can cause life changing events to occur in adults. I am horrified that they are even considering it, let alone actually giving it to children. There should be no further roll out of any of these jabs until such time as the side effects are fully investigated and if necessary, thrown in the bin of it is found that they do serious harm to people. But we all know WHY they are being given as a mass human experiment, don’t we? The agenda is not very pleasant. 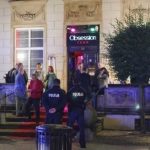 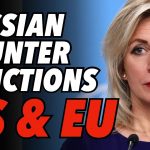