North Korea has released a statement slamming Nikki Haley for claiming North Korea is “begging for war”, a statement she made during the most recent UN Security Council debate on the Korea crisis.

Additionally, the statement criticises her personal inexperience and lack of comprehension of basis facts of international relations as well as offering a more broad criticism of US foreign policy.

Earlier, Haley revealed that Donald Trump offered her the position of Secretary of State although she turned it down before accepting Trump’s counter-offer to be US Ambassador to the United States.

READ MORE: Nikki Haley was offered Secretary of States job and turned it down

The entire statement from the DPRK is reproduced below:

“U.S. Ambassador to the United Nations Nikki Haley, a political prostitute, has kicked off a hysteric fit, exasperated by the DPRK’s nuclear weaponization that has reached its final phase.
At an urgent UN Security Council meeting on Sept. 4 she hurt the dignity of the supreme leadership of the DPRK, stunning the world public.

Her rubbish about “misuse of missile and nuclear weapon” and “begging for a war” is just a revelation of the ill-intended purpose to adopt a new toughest “sanctions resolution” with ease by describing the DPRK as a “provoker of war.”

As far as Nikki Haley is concerned, she is just a beginner in politics and diplomacy as she came under public criticism for her string of rubbish over the ballistic rocket launch of the DPRK in March last.

Not content with it, she fully revealed her bad blood toward the DPRK by slandering it over its non-existent “human rights issue” and crying out for taking a military option against it. She is crazily swishing her skirt, playing the flagship role in Trump administration’s hideous sanctions and pressure racket against the DPRK.

She became a laughing stock of the world public for her reckless tongue-lashing devoid of any elementary conception of reason. It seems that she is still ignorant of what disaster would be entailed by her stupidity.

So wretched is the plight of the U.S. which put forward such depraved woman and beginner diplomat as its representative in the UN arena.
She talked as if the DPRK were inviting a war while the U.S. wanted peace, asserting that there is a limit to the patience of the U.S. But with no rhetoric can the U.S. cover up its true colors as chieftain of aggression and war and wrecker of peace.

In actuality, the heavyweights of the U.S. are busy with arms selling.
South Korean media, commenting on a recent phone dialogue between Trump and the south Korean chief executive, disclosed that the U.S. president personally opted for pressurizing south Korea to buy U.S.-made weapons with the lifted limitation of the south Korean puppet army’s missile warhead weight as a momentum. This is not surprising.

It is just the U.S. which appeared with aggression and has grown corpulent through wars. It has ceaselessly ignited wars to seek regime change in the countries incurring its disfavor.
The U.S. escalating nuclear threats and blackmails pushed the DPRK to have access to nukes, and the world acknowledges that the DPRK’s access to nukes is a reasonable option to protect its vital rights and sovereignty.

Nothing will be more foolish than to think that the DPRK, a strong nuclear power, will remain passive toward that outrageous pressure aimed at crippling its “social system.”
Nikki should be careful with her tongue though she might be a blind fool.
The U.S. administration will have to pay a dear price for her tongue-lashing”.

NK is saying what the rest of us thinks about her.

You and I hate her viscerally, Vladimir, but just imagine how Assad and Un hate her!

please, feeling sorry for her is nicer……………. she is definitly mentally unstable

You are right, Chevi, and I really shouldn’t comment when I’ve been drinking. Sorry everybody!
But they really hate her in NK! and that is understandable. I’ve never read any statement so angry at any individual diplomat.

But they say it so colourfully – I especially like the swishing skirt.

Every time I hear this lady talk, it seems that she just cannot find a handle on being diplomatic…its all accusations, false perceptions and bullying if she can….this is not a diplomat but an instructor….I though Hillary was bad….shes got a twin

pig is too soft, she is a orca on celibacy vows

You got to hand it to her though, she’s a great story teller… Just a shame all her stories are fiction.

Anyone who has followed US foreign policy for sometime and particularly the US position as expressed by its ambassadors at the UN, knows they are Shameless blackmail, arrogance, and contempt for International law. Nimrata Randhawa’s predecessors, Samantha Powers, Susan Rice, John Bolton, and Madeleine Albright, were all the same shit the only difference being she is the only one who camevout of a waffle house. The syndicate of organized crime called US government, this collection of war criminals, thugs, mobsters racketeer and global tertorists ate the sole responsible for the Korean Peninsula crisis, NOT DPRK. NORTH KOREA, is absolutely both… Read more »

That most despicable creature Secretary of State?

George Carlin was absolutely right after all: that’s the best the Empire can do, “garbage in, garbage out”.

That is excellent – thank you.

“Haley revealed that Donald Trump offered her the position of Secretary of State” ….. WTF?

I hadn’t actually realised that the US could be worse off than it currently is without employing an actual monkey for the job —- boy was I wrong.

A monkey would do a much better job.

Yes because the shit flinging would at least be contained to one room, rather than across the planet.

America has an Orangutan running it’s country, what would you expect. Actually, sorry, an insult to apes in general.

Better an Orangutan than a certified demonic wicked witch who thought about making voodoo dolls of her opponents and sticking pins in them.

That is about the first time the North Koreans have made a statement that is perfectly true.

“She became a laughing stock of the world public for her reckless tongue-lashing devoid of any elementary conception of reason.”

Well. All I can say there is – he’s 100% spot-on.
The entire planet sniggered at that : “North Korea wants war – America never wants war – but our country’s patience is limited” pure bullshìte gumf.

A total neo-con – her words are worthless

How can America expect any human being living on planet earth with half a brain to take it seriously when it puts idiots such as this waffle house waitress in charge of it’s U.N mission??? Sorry, but your country ceased to have any credibility right after it dropped bombs on Nagasaki & Hiroshima. Just go away & die somewhere.

ughh Nikki Haley the Sihk-Jew is a filthy creature. In a short time she has managed to be more contemptible than Samantha Power.

she must be one of those “crypto-zionist rednecks”having just fallen off the bus from israel….still dazed and wondering why all these people are staring at her…..what a classic gem….a paradigm of diplomatic sea sickness…..

She’s not a ‘beginner diplomat’. Anyone who has raised more than 2 children at once, in the same home learns diplomatic skills beyond the abilities of this creature. Parents start out as beginner diplomats and often become masters in no time if they actually give a squat. This mongrel doesn’t care about anything except herself.

Haley is a dangerous bitch. I wonder why Trump insisted so much in having her in his team. It seems that Trump’s moves suggest his stand is far from what he promised to do.

lol this trash kido must stay put, I enjoy having a good laugh at the yankdome, the creep is just dong fine, keep it on at the theater, very good actress indeed. Shakespeare must contact her soon.

Hugs a million to DPRK: calling a spade a spade.

Thirty-one comments so far. I have been reading and re-reading the N. Korean statement. It is a gem worth savoring like a fine wine, slowly, calmly. It takes aim at Nikki Haley. Yes, she is foolish, yes, she is a fool. All the better. She reveals — against her will and intent, of course, but that is always the case with American hegemonic buffoonery — that the US has blown its powder. The UN Security Council is the *world* forum. And what does Nikki tell *the world*? They are begging for war… we don’t want war. So let us relish… Read more » 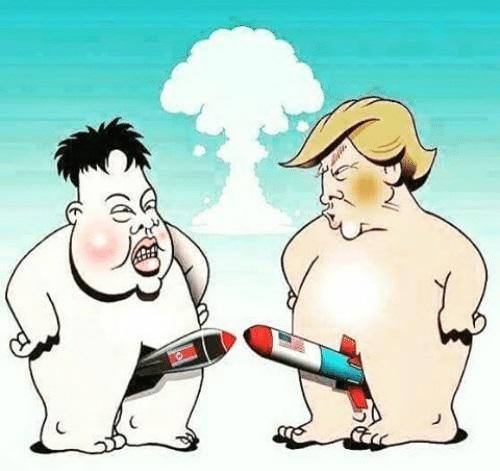 Nikki is like Haley’s comet first you see it then its gone in a flash..lmao

It is not unkind to say that the majority of US government senior officials , Top Military officers and Politicians should really be in jail or a lunatic asylum.

UN Ambassador Bubble Headed Neo-con Heartthrob Waffle House Waitress Nikki Haley is out for only her own self and what ever makes her think she looks good. She has absolutely no foreign policy experience or even knowledge of any foreign countries policies history culture or its people and just what they are or are not capable of doing.

I would have been much less generous than that.

This Indian woman is so desperate for the approval of her Jewish masters that she will do anything.

Nikki Haley needs to be fired NOW. She’s an embarrassment and a disgusting warmonger