The Victory Day Parade in Moscow on 9th May provides Russia with an opportunity to showcase its latest military hardware, and the latest parade on 9th May 2017 was no exception.

On this occasion the Russians decided to showcase two air defence systems they have developed to protect their Arctic territories. 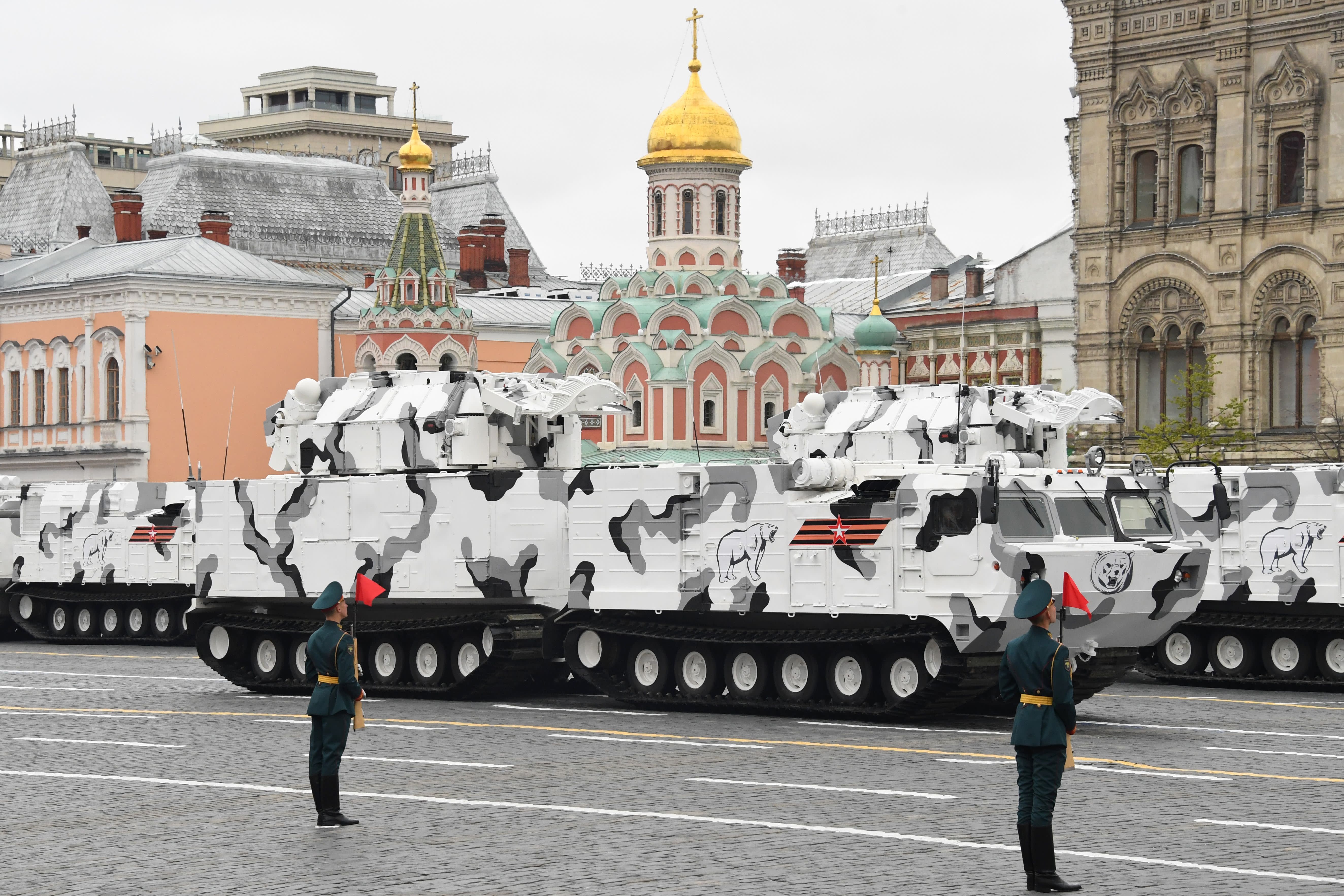 Both systems use the extraordinary DT-30 Vityaz all terrain tracked vehicle developed by the USSR in the 1980s for use in Arctic conditions.

The DT-30 Vityaz tracked vehicle has no equivalent Western analogue.  This is how Wikipedia describes how it operates

The transporters models feature similar configuration. Both units are basically sealed all-welded structures.The vehicle power plant is arranged in the first van behind the driver’s cabin. From a 12-cylinder multi-fuel engine the torque is conveyed to a hydro-mechanical transmission via a cardan shaft and further to the bevel gearing and final drive units, as well as to the drive sprockets of the first and second van bodies.

The track assembly is made up of four wide rubberised-fabric band tracks reinforced with welded steel cross-pieces; four track guide engagement drive sprockets with nine pairs of polyurethane rollers; road wheels with rubber bands, and four idler wheels (one on either side is provided with a polyurethane rim). The suspension is independent, torsion-bar type, with spring supports on all rollers.

Years of operation of these vehicles have proved their reliability and robust design. The vehicle design primarily features an unconventional pattern of four active track envelopes providing for large surface contact with the ground for greater stability. In addition to this feature, these ATVs ensures the so-called “kinematic method” for turning the articulated tracked vehicle through the “forced folding” of its units. The kinematic method of turn provides a positive tracking force for all tracks during linear movement and while making turns. A combination of the kinematic method of turn and a powerful multi-fuel engine, along with a hydro-mechanical transmission, unique track and suspension system with wide band tracks, road wheels with rubber pads, and vertical hydraulic cylinders which allow the two vehicle units to move vertically in relation to each other, make the articulated vehicles with a maximum weight of up to 60 tons more capable in terms of their sand/loose soil/snow-going capacity, than any type of single-unit vehicle.

As the two units can be turned relative to each other in the vertical and horizontal planes via hydraulic cylinders or, conversely, can be fixed, the two-unit vehicle can move over short (equal to the length of one unit) sections of difficult terrain and obstacles like ditches and walls and come out of water onto an unprepared bank,ice,or peat.

Owing to their unique design, the Vityaz family of ATVs are capable of operating in conditions impossible for other all-terrain vehicles, for example:

The DT-30 Vityaz and its smaller DT-10 and DT-20 siblings are widely used not just by the Russian military in the Arctic but also by civilian industry, including by Russia’s oil and gas industry as it develops Russia’s energy resources in the Arctic.

Needless to say it is precisely in order to protect these resources that the Arctic versions of the Pantsir-S1M and Tor missile systems which use the DT-30 Vityaz vehicle have been developed.