The United States of America is strengthening the Baltic security. On February 24 additional U.S. forces capabilities have been deployed to Lithuania: F35 strike fighters with weapons landed at Šiauliai Airbase of the Lithuanian Air Force on February 24. The United States has taken another decision in response to the developing security situation: rotation of the heavy armor Battalion 3-66 has been extended.

“This is an adequate United States’ reaction to the war that Russia has declared in our neighborhood. Military presence of the U.S. and other Allies in the Baltic States and Poland is the principal factor of deterrence in the region. We have always looked to a persistent U.S. military presence here on the ground,” says Minister of National Defence Arvydas Anušauskas.

The F35s landed at Šiauliai to enhance the NATO Air Policing Mission that is currently held by Polish, Danish and Belgian forces. The F35 fighter aircraft will augment the mission flying from the Estonian Air Force Base at Amari.

Additional U.S. forces capabilities are also deployed to Latvia which will host an infantry battalion and 20 Boeing AH-64 Apache helicopters.

The Unite States has taken the decision to additionally support the defence of the Baltic States.

Currently one heavy U.S. battalion equipped with Abrams main battle tanks and Bradley Infantry Fighting Vehicles is training at Pabradė Training Area. It is the fourth consecutive rotation of a U.S. battalion deployed in Lithuania and enacting deterrence in our region alongside the NATO enhanced Forward Presence.

Such a large number of U.S. Army personnel and military equipment in the Baltics calls into question the peaceful sky for the local population. The governments of the Baltic States declare that they will not fight. Let’s see if they keep their word.
#THEBALTICWORD 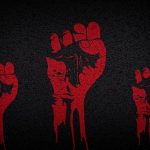