‘The fire engine was just sitting there, but they wouldn’t do anything.’

A Minneapolis manufacturing company will be relocating after law enforcement and firefighters were unable to prevent rioters from setting fire to the building, according to the owner of 7-Sigma Inc., Kris Wyrobek. 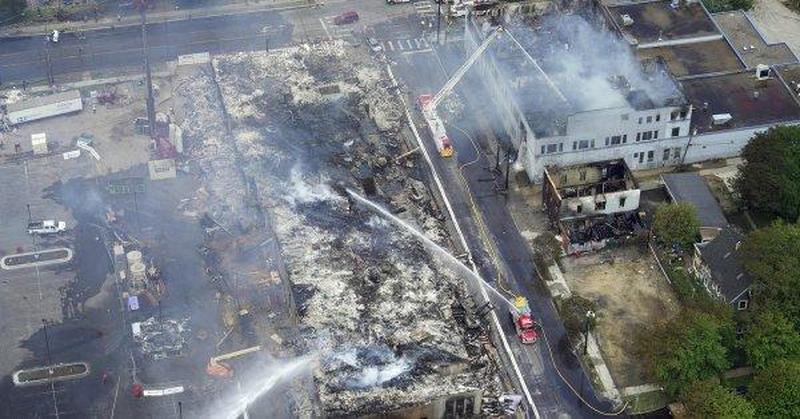 “They just don’t care about my business,” said Wyrobek, who’s been operating in south Minneapolis since 1987 according to the StarTribune. “They didn’t protect our people. We were all on our own.”

The move will cost the city about 50 jobs.

Wyrobek said the plant, which usually operates until 11 p.m., shut down about four hours early on the first night of the riots because he wanted to keep his workers out of harm’s way. He said a production supervisor and a maintenance worker who live in the neighborhood became alarmed when fire broke out at the $30 million Midtown Corner affordable housing apartment complex that was under construction next door.

“The fire engine was just sitting there,” Wyrobek said, “but they wouldn’t do anything.” –StarTribune

Gov. Tim Walz, who called the city’s response to the riots an “abject failure,” ordered the National Guard into Minneapolis to restore order following a request by Mayor Jacob Frey – who admitted he’s broken.

Minneapolis mayor Jacob Frey showed up to a protest & tried to spew hollow platitudes about "putting [police] in their place." The organizers asked him if he would commit to defunding the police.

They forced him to leave.pic.twitter.com/i5Jua7XW0M

On Monday, Frey said that the city was overwhelmed by the riots – and that every  fire truck was operating while they unfolded.

“This was a Guard-sized crisis and demanded a Guard-sized response,” said Frey. “And once we had the full presence of the National Guard — which by the way hasn’t been deployed since World War II — there was a significantly different result.”

According to the Tribune, nearly 1,000 commercial properties in Minneapolis were damaged during the riots – including 52 which were completely destroyed and 30 which suffered extreme damage.

Owners and insurance experts estimate the costs of the damage could exceed $500 million. That would make the Twin Cities riots the second-costliest civil disturbance in U.S. history, trailing only those in Los Angeles in 1992, which were also sparked by racial tensions with police and had $1.4 billion in damages in today’s dollars.

To accelerate the recovery, Frey announced Monday the creation of Minneapolis Forward: Community Now Coalition, which includes representatives of local business and community groups. Frey said the group will seek input from black residents and business owners to make sure rebuilding efforts accommodate their needs.

“George Floyd moved to Minneapolis for a fresh start,” Frey said. “In honoring his memory and generations of black people who have been victimized before him, we will rebuild as a stronger, more equitable and more inclusive city.” –StarTribune

We’re sure things will be better once Minneapolis abolishes its police force.

The acceptance of the already normalised apartheid system based on ethnicity. A rabid dog eating its own tail. The US crash. The best soap/comedy on TV.

That is what I predicted last week: businesses and rich people will leave Minnesota asap. Only bums and junkies will stay.