The liberal left in the United States does know one thing. They know that President Trump is pushing them out of dominance. They know that his picks for any Supreme Court nominee will be constitutionalists, and not activists. And, they know that such people are not usually interested in activist, “living document” interpretation of the country’s founding document.

It is for probably this reason that the Women’s March came prepared for whoever the Supreme Court nominee was going to be. Fox News reported that they made a blunder and revealed the cookie-cutter plan of attack:

In an embarrassing blunder, though, the Women’s March statement began: “In response to Donald Trump’s nomination of XX to the Supreme Court” — indicating that the group didn’t expect to have to change its pre-written press release much on Monday night.

However, President Trump’s pick of Brett Kavanaugh certainly got the liberal activists upset.

President Trump’s nomination of Brett Kavanaugh to replace retiring Associate Justice Anthony Kennedy has set the stage for a bruising confirmation battle, as Senate Democrats and liberal groups vowed to resist what could be a dramatic and long-lasting rightward shift on the Supreme Court.

Within seconds of Trump’s announcement in the White House Monday night, the far-left political action committee Democracy for America called Kavanaugh, 53, a “reactionary ideologue” whose confirmation would “directly lead to the deaths of countless women with the dismantling of abortion rights.”

And in a statement, the Women’s March said ominously: “Trump’s announcement today is a death sentence for thousands of women in the United States.”

“Stripping a woman’s ability to make decisions about her own body is state violence,” the group continued. “We cannot let this stand. We will raise our voices and take to the streets.”

There is a great deal of opposition on the left. House Minority Leader Nancy Pelosi swore to “Avenge Obama”:

Pelosi, 78, is one of several top Democrats — including Sen. Bob Casey, D-Pa., and Senate Minority Leader Chuck Schumer, D-N.Y.– who already have announced that they oppose Trump’s pick without knowing whom the president has selected. Schumer has said the Senate should not consider any Supreme Court nominees during an election year.

Meanwhile, Fox News has learned that several red-state Democrats, including three who voted to confirm Neil Gorsuch last year, will not be attending tonight’s primetime rollout of the Supreme Court nominee in the White House.

In the fundraising email, Pelosi opened by acknowledging that she has been making persistent appeals to potential donors lately: “I emailed on Saturday. I emailed on Sunday. Now I’m emailing you again today.”

She then outlines her plan to get back at Senate Republicans for their refusal to vote on Obama’s 2016 Supreme Court nominee, Merrick Garland. That vacant seat ultimately went to now-Justice Gorsuch after Trump’s election. Pelosi, though, has no actual vote in the confirmation process, and seemingly uses the email to raise money for House Democratic candidates.

In reality, Judge Kavanaugh is on record for saying that he would not try to overturn Roe v. Wade, the legal case that established the notion of abortion rights in the United States. His rulings and opinions have even created alarm and outrage on the pro-life side of the abortion argument, because he did not rule in a manner that attacked the legality of abortion, but rather the constitutional adherence of given laws and cases:

Pro-choice advocates will likely focus on Kavanaugh’s decisions in cases like Priests for Life v. HHS, in which Kavanaugh wrote a dissent arguing that ObamaCare’s contraceptive coverage requirements put undue burdens on some religious beliefs.

They are also expected to emphasize Garza v. Hargan, a recent case in which Kavanaugh dissented from a ruling that the Trump administration should permit an illegal immigrant in federal custody to have an abortion. Kavanaugh’s dissent angered both sides of the abortion debate, because while Kavanaugh did not endorse the immigrant’s right to an abortion, his dissent also did not specifically deny her that right in all cases.

Brett Kavanaugh served for more than ten years on the D.C. Circuit Court of Appeals, and has an extensive record that the US Senate will need to sift through as they prepare for confirmation hearings. The GOP expects a very bloody fight, but they also believe that Judge Kavanaugh will be confirmed as Supreme Court Justice Kavanaugh by the time the Court convenes on October 1.

Well, the battle is only starting ? 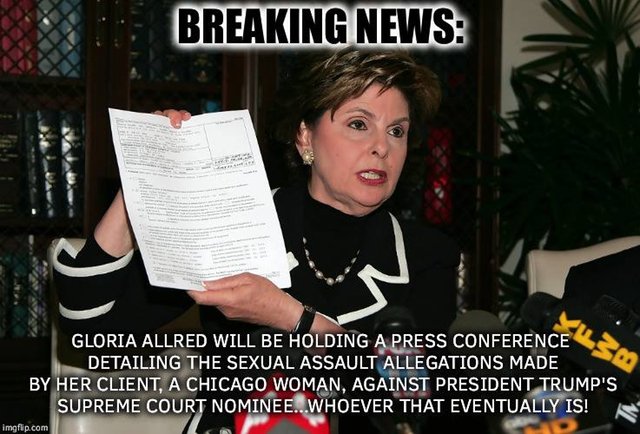 Do the DNC understand the President is not a Democrat or run on the platform, to only do the work of Obama.

Babies, women’s rights?????? Funny, how those, whose mother’s never went through an abortion, decide they know what the unborn deserve best. When there are no mental or physical concerns to mother and foetus. Funny, they do not feel the same, when it concerns the ‘death sentence’.