The last six months have a very active measure of time when the sheer number of high profile persons involved in sexual misconduct allegations is considered. Even leading #MeToo advocates are being caught up in the tsunami of sexual harassment allegations that seem to be sweeping the public scene.

Cristina Garcia, a leading #MeToo advocate is on unpaid leave, as of Friday, immediately following sexual misconduct allegations against her were made public.

The Democratic chairwoman of the Legislative Women’s Caucus has been a leading figure in the anti-sexual harassment against women movement that has since become global in its implementation. She denies allegations that she groped a former legislative staff member in 2014, which allegations are presently under a formal investigation by the authorities.

Garcia, by taking leave, wants to “minimize distractions” and avoid the appearance of exerting influence on the investigation. CBS SFBay Area Reports:

“Upon reflection of the details alleged, I am certain I did not engage in the behavior I am accused of,” Garcia said in a statement. “However, as I’ve said before, any claims about sexual harassment must be taken seriously, and I believe elected officials should be held to a higher standard of accountability. ”

Fierro accused her of stroking his back, grabbing his buttocks and trying to grab his crotch in the dugout after a legislative softball game. An anonymous male lobbyist told Politico on Thursday that Garcia made a crude sexual remark and tried to grab his crotch at a May 2017 fundraiser.

Both the lobbyist and Fierro said Garcia appeared to be drunk at the time of the incidents.

Garcia, of Bell Gardens, was one of nearly 150 women to sign an open letter in October calling out a pervasive culture of sexual harassment at the Capitol and said that she herself has been the target of groping and inappropriate remarks by people in the building. She slammed two male colleagues accused of misconduct before both resigned last year, and she was featured in Time Magazine’s Person of the Year issue on sexual harassment “Silence Breakers.”

“I refuse to work with (Assemblyman Bocanegra) and anyone who takes part in harassment or assault,” she tweeted in October after news that Bocanegra was disciplined for groping a colleague in 2009.

On Monday, she was one of the featured speakers at a Capitol rally in favor of legislation giving legislative staff members whistleblower protections for reporting sexual misconduct or other misbehavior.

Her outspokenness prompted Fierro to finally share his story in January with his former boss, Democratic Assemblyman Ian Calderon, the majority leader. Calderon reported it to the Assembly Rules Committee for an investigation.

“If the person leading the charge on it isn’t credible it just ends up hurting the credibility of these very real stories,” Fierro told the AP.

About two dozen sexual harassment allegations were made against Assembly lawmakers, staff and lobbyists in 2017 — the most within a single year since 2006 — and at least eight allegations are pending, according to documents released last week.
Fierro, of Cerritos, left the Assembly in 2016 and now runs a communications firm. Calderon, his former boss, is now the majority leader. 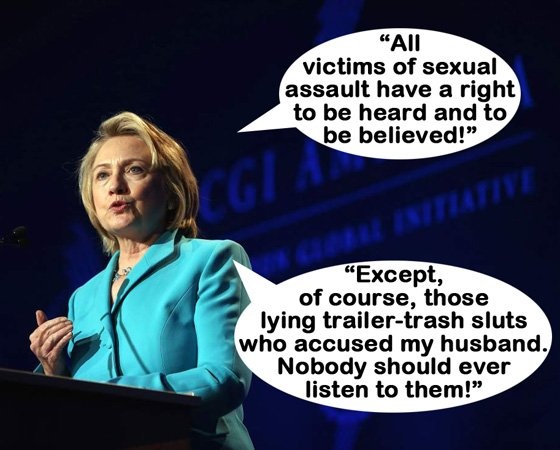 That neatly summarizes “their” attitude!!!