After recently being freed from police custody by a mob of his supporters, after threatening to jump off a roof, former Georgian leader Mikhail Saakashvili has once again been arrested by regime authorities.

Ever since Saakashvili turned from Poroshenko ally to opponent, there was a chance that Saakashvili would simply go away and look for a new cause to be used in the advancement of his personal ambitions. However, the combination of Saakashvili’s tenacity and Poroshenko’s determination to eliminate Saakashvili as a potent political force in Ukraine, have both congealed into making Saakashvili the de-facto and highly vocal leader of the ‘opposition’ in Kiev.

Saakashvili’s latest saga began when he defied the Kiev regime and returned to the country without permission in order to rally support for an uprising against Poroshenko.

His calls have grown increasingly defiant, referring to Poroshenko as a “criminal” who must be removed from office immediately.

With Saakashvili in prison, there is a chance that his supporters may yet again try and break him out. Bribery and/or blackmail cannot be ruled out in such a situation, as the astronomical levels of corruption in Kiev mean that surprisingly small amounts of money and surprisingly pedestrian threats, carry a great deal of weight in such situations. His claims of being on a “hunger strike” may only embolden his self-styled image as a “political martyr”.

Furthermore, both Saakashvili and Poroshenko are facing the odd situation of both having an apparently direct line to many to neocons in the United States. 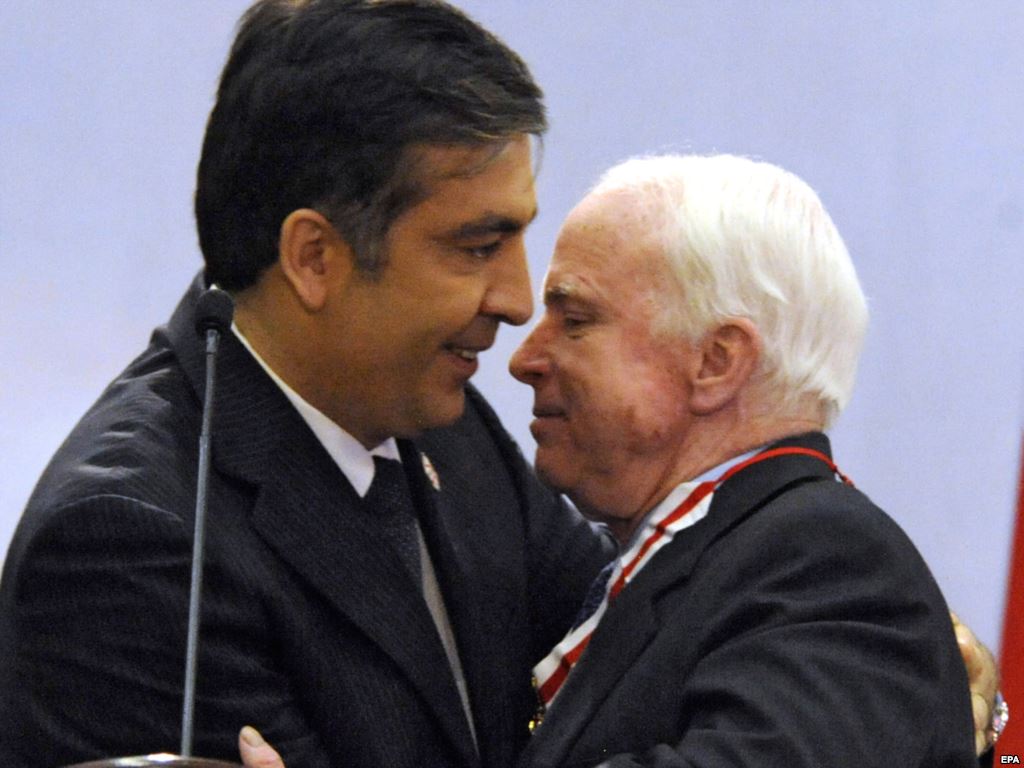 Because of this, it is not beyond the realm of reason that John McCain may be getting phone calls from both Saakashvili and Poroshenko requesting his personal loyalty and the accompanying weight it carries among US funded political bodies in Kiev as well as notorious so-called NGOs. 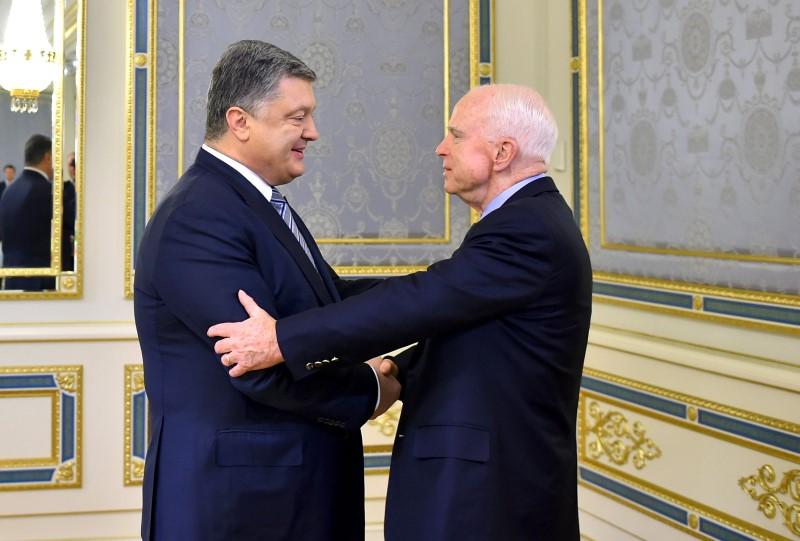 As Saakashvili has if anything, more ties to the west, as well as a longer period of deep relations with prominent neocons and neoliberals in the west, it may be decided that Saakashvili is indeed the preferred choice.

As I recently wrote,

“In 2004 Mikheil Saakashvili became the leader of Georgia after ousting the previous President through a series of street riots funded and supported by the US. They were given the name “rose revolution” by a cheering western mainstream media.

Saakashvili’s predecessor, Eduard Shevardnadze had has tenure in power plagued by a balancing act between Moscow and Washington that he ultimately proved incapable of achieving with any real results. Subsequent to Shevardnadze’s ousting, he was recast by the Saakashvili regime as pro-Russian, while if anything, his connections to the United States during his years as President made things strained with Moscow, even though he once worked there as a prominent Soviet Foreign Minister.

After pushing through neo-liberal economic reforms, imprisoning his rivals and shutting down opposition media, he decided that rather than work with Russia on a peace process regarding the Russians of South Ossetia and Abkhazia, he instead aggressively invaded the disputed territories which subsequently became sovereign republics bordering Russia.

Although the west was fully supportive of Saakashvili’s war, the EU later conceded that he had been an aggressor, as Russia had always maintained. Although he clung on to power until 2013, many of his former supporters became sick and tired of his public antics, his economic mismanagement, his corruption and his failure to keep his promises.

He is now a wanted criminal in Georgia on corruption related charges.

If any of this sounds familiar, it is because Saakashvili’s rise and fall in George mirrors that of Petro Poroshenko and his regime in Kiev.

In 2014, Ukraine’s President Viktor Yanukovych was caught in a similar bind as was Eduard Shevardnadze. Like, Shevardnadze, Yanukovych tried to balance relations between the west and Russia and ultimately failed to convince either side. Far from the Chinese model of “win-win” partnerships,  Yanukovych was the master of “lose-lose”.

Long story short, like Shevardnadze, Yanukovych was ousted by street thugs, paid for by the US and its allies and was subsequently re-cast by his personal rivals as being pro-Russian, even though if anything, it was his initial seduction by European overtures that exposed Yanukovych as a man of indecision.

Then like Saakashvili, the new Ukrainian regime which in short order was lead by Poroshenko, proceeded to wage a war of aggression against the breakaway Donbass Republics while Crimea formally reunited with Russia after a peaceful democratic vote.

Today, Poroshenko is faced with Donbass Republics that few people seriously think will ever go back to Kiev rule, a broken economy, rampant corruption and western allies who are growing increasingly indifferent in spite of their consistent opposition to anything perceived as friendly to Russia.

To make things even more awkward, it is Saakashvili who is personally leading the crusade to oust Poroshenko.

The entire saga is one part “Et Tu Brute” and one part travelling circus, not least because Saakashvili was appointed governor of Odessa by Poroshenko before their dramatic falling out which saw Poroshenko stripping Saakashvili of his newly acquired Ukrainian citizenship before trying to have him arrested for returning to Ukraine.

While so-called “colour revolutions” are generally ultra-nationalistic and specifically anti pan-Russophone in nature, Saakashvili is an ethnic Georgian whose only connection to the far-right in western Ukraine is that all were once united under Moscow as part of the Soviet Union. The Russian language is one of the few things that personally ties Saakashvili  to the majority of the population of Ukraine. All the English as a second language classes (promoted by Saakashvili in Georgia and Poroshenko in Ukraine) in the world, have not changed the fact that Russian remains the lingua-franca of the post-Soviet map.

But when the similarities end, there is one important difference. While the Poroshenko regime is still fighting an ultimately losing war of aggression against the Donbass republics, by the end of Saakashvili’s term, he had to live with the reality that South Ossetia and Abkhazia were never again going to be ruled from Tbilisi. Sooner or later, a future leader in Kiev, will have to acknowledge the same in respect of Kiev’s non-relations with the Donbass republics–one way or another.

In this sense, Saakashvili is the best possible leader Kiev can have, as the mistakes the Kiev regime is still making, are the mistakes Saakashvili has already made. Although, it does not appear that Saakashvili has learned anything from his past mistakes, there is something of a defeatist attitude among Ukrainians supporting a man who failed to achieve in his own country, what the current regime in Kiev is being excoriated on the streets for failing to do in Ukraine. It’s therefore a tacit acknowledgement that meeting the new boss is literally meeting several old bosses at once.

Neighbourhood cinemas in many countries used to show films continuoously without a specific start time. People could come and go as they pleased. Often, people would walk in at the half way point, then sit through the beginning until they caught up to the place in the film that was being shown when they initially walked in.

Perhaps this is one of the many reasons that western mainstream media cameras are largely absent from the Maidan 2.0 or perhaps the “Rose Revolution” 2.0, that Saakashvili is attempting to lead. They’ve seen it before and are not excited enough to sit through it again”.

Ultimately, Kiev’s western backers will have to decided which ‘leader’ they support. Ataturk once said of leaders, “They go as they come” and indeed many leaders do. But in Kiev, they also come as they went.