He is the only living former Soviet leader. Everyone else is either dead or has been kicked out of office with the purge of Communist Party officials in 1992. And he is coming to Washington on Jan. 16, the first and only ‘Stan president to meet with President Donald Trump at the White House.

When Trump got a December 2016 phone call from the elder statesmen, CBS News was quick to point out that the president-elect had reportedly congratulated a “dictator” for his “miraculous” post-Soviet success. Compared to every other leader in the region, Nazarbayev is best in class.  Compared to nearly every other former Soviet state outside of the three Baltic states that have joined the European Union, Kazakhstan is in better shape and more politically stable than all of them.

“People could not have predicted how well all of this would turn out, but Nazarbayev opened Kazakhstan to the world,” says Washington’s first ambassador to the country, William Courtney, now a senior fellow and executive director of the Business Leaders Forum at the RAND Corporation. Courtney was ambassador to Kazakhstan between 1992 and 1995. He is now executive director of the U.S. Kazakhstan Business Association.

“We will set up a meeting with him,” Courtney says. “U.S. companies will want to talk energy, but also will want to see what he has in store for privatization plans finally. This is not a full democracy. It’s not like Ukraine. But it’s more stable. It’s not the kind of police state you once had in Uzbekistan until recently.”

Nazarbayev is more moderate in the way he runs the government. Shared power is important to him and that includes keeping with the long-standing post-Soviet tradition of a multi-vector approach to geopolitics, whereas Russia, China, and the West are important, but not played off each other, says Courtney. “The U.S. is not going to unseat Russia or China from Kazakhstan and Russia isn’t going to get U.S. energy companies and security strategy out of Kazakhstan either,” he says.

The White House confirmed the visit on Jan. 9.

In September, the White House said Nazarbayev backed Trump’s new South Asian strategy, which included fortifying the U.S. fight against the Taliban in Afghanistan and penalizing Pakistan for harboring anti-Afghanistan militants within its borders. In that phone call, Trump “expressed appreciation for Kazakhstan’s regional and global leadership, including its upcoming tenure as chair of the United Nations Security Council in January.”

Nazarbayev isn’t the Angela Merkel of the former Soviet Union, but he is a man who has spent much of the last decade trying to repackage his country as an example of modernity to be used by neighboring countries of the vast and lonely Central Asia.

Kazakhstan has led the charge for banning nuclear weapons and has opened the capital city of Astana to Syrian peace talks on numerous occasions – what is known as the Astana peace process.

Nazarbayev wants to be seen as a power broker in Central Asia, and does not have any competition. His visit to the White House is likely to be used to make sure the U.S. defense budget includes Central Asia spending, and perhaps some time spent on the need for U.S. expertise to help pull all of the oil out of its portion of the Caspian Sea. The Kashagan and Tengiz fields have attracted billions from Chevron.

“It’s been a privilege to play a supporting role in the growth of Kazakhstan to a nation of global prominence,” says Chevron spokeswoman Sally Ann Jones.

The country depends on oil. In 2013, before oil prices dropped by half, much of its exports and government revenues came from oil and gas. With a GDP per capita of just over $7,500, Kazakhstan could reach high-income country status within a decade thanks to Caspian Sea oil, according to a report by World Bank economists published last month by the Brookings Institute.

Despite the oil revenue, Nazarbayev has paid more than lip service to moving away from commodities. The government has spent hundreds of millions of dollars on real estate projects and green energy initiatives. The biggest, most visible example is the Astana International Financial Center, something many say is an attempt to create a mini Dubai of Central Asia. Others call it pie in the sky.

“The current economic situation in Kazakhstan, with low oil prices and years of a weak Russian economy, has rolled back those plans quite a bit,” says Mariya Y. Omelicheva, associate professor in the Department of Political Science at the University of Kansas. “They’ve had to devalue their currency significantly.”

The tenge is down 54% over the last five years.

“They’ve been on track to build their own stock market, and the new financial center is part of that plan, but I think they are still struggling to get back to where they were in 2014,” she says. 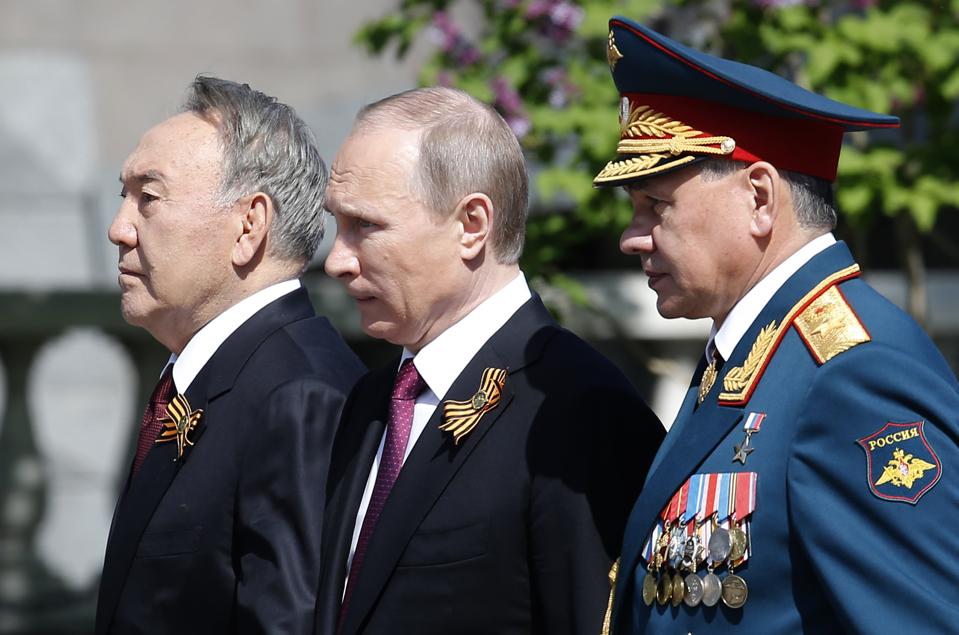 If all goes well with oil prices, the Tengiz and Kashagan fields stand to help Nazarbayev’s legacy of building out Kazakhstan. They’ll attract more foreign direct investment from energy companies, at least.

The Chinese will also help. China poured millions into Khorgos – one of the largest dry ports in the world located on the border of the two countries. The New York Times reporter Andrew Higgins wrote extensively about the Khorgos port this month, giving readers a glimpse into one of China’s biggest Belt and Road initiative (BRI) developments, and what that means to a frontier country like Kazakhstan.

In short, it has been like a shot in the arm to Nazarbayev.

“Kazakhstan has eagerly embraced China’s ambitious initiative to revive the centuries-old Silk Road,” says Nihad Ahmed, an economist with London-based Focus Economics.  Most of the routes proposed under China’s BRI go through Kazakhstan.  “It stands to be a real game-changer for them in helping maximize the advantages of its location, deepen economic ties to China, and diversify its economic structure away from dependency on oil by catalyzing a ‘third wave of modernization’ through the acquisition of advanced technologies and upgraded infrastructure,” Ahmed says.

General Electric is benefiting directly. They are building over 700 locomotives with Kazakhstan rail companies, of which half of the machinery will be made in the U.S., the company said. GE’s transportation division signed a deal with the government’s railway company in December to be the digital logistics systems provider for their entire network.  More General Electric-Kazakhstan news is expected to come from Nazarbayev’s official visit.

Nazarbayev brings with him more positive baggage than negative ones. There is no fear of a Russian invasion, at least nothing compared to what one hears in Lithuania and Ukraine on a revolving basis. There are no color revolutions. Foreign capital, be it from China or Chevron, is going to Kazakhstan and not the other ‘Stans. And not yet to Ukraine, mainly due to civil strife in the nation’s southeast, pitting Russian backed separatists against the government.

Most of these projects, from BRI to the Caspian, are in line with the priorities set by the government in its multi-year investment strategy. The strategy targets a roughly 30% increase in foreign direct investment into Kazakhstan by 2022.

The main question on everybody’s mind is what happens to it all once Nazarbayev retires.

“There is no reason not to have a reasonable succession after Nazarbayev,” says Olga Oliker, director of the Russia and Eurasia Program at the Center for Strategic and International Studies in Washington. “If he steps down into retirement, he might have more influence and control over new leadership. I would be shocked if they did not have a peaceful transition.”

Like Putin, and to some degree like the relative disrepute celebrity of Trump himself, Nazarbayev benefits from popularity at home. However people see him, one constant among Central Asia watchers is that Nazarbayev managed political stability throughout the fall of the Soviet Union. He has united the country for over 30 years.

“You have to hand it to him,” says Omelicheva. “You can criticize a lot of his policies, but he’s been a smart leader in many ways. I cannot think of another leader there who has invested so long into the education of managers and engineers to build their country. I think it’s paying off.”