It is kind of a shame that our penetration on The Duran is not in the millions. All of Dr. Steve Turley’s credit to our editors Alexander Mercouris (our Chief) and Alex Christoforou notwithstanding, we are still a relatively small geopolitical news magazine, but one with excellent analysts and commentators. Forty years of “one size fits all” journalism – that being at the national scale – tends to condition many of us to think “if only we could break into such wide circulation…”

However, maybe this is not needed. The following piece, which I am reprinting in full, from John Varoli from his own website is excellent, and it is independent of our analyses, and of Dr. Steve’s and of Colonel Douglas MacGregor and Scott Ritter, and that says something in itself:

There are many people that ARE thinking for themselves, and we are coming to consonant conclusions that are generally compatible with one another. If we are doing this, one wonders how many others are also realizing the same things who may be passing the word on in conversations locally, off-line?

One may hope for such a positive result. My further hope is that this results in the development of the one thing in this world that can lead to true change – a groundswell of people taking matters into their own hands to remove the corrupt, deeply-embedded “governing class” that we have unfortunately allowed to take shape, even and especially in, the United States, the country that was founded on the basic principle that “any government of men does not deserve the free gift of our trust; that government is of the people, by the people and for the people.”

We lost that in the last several generations, and moved to Statism, and the statists were only too happy to do what they are doing now, and what they have been doing especially in the last two years – taking advantage of any and all crises, to manufacture new ones and seize control of people.

For this reason I am including Dr. Steve’s recent video about the collapse of COVID masking requirements in the USA, because he discusses the concept of “risk societies” which are run on the basis of secular globalism and requiring a ruline technocrat elite. We have had two years of these people getting their way and the results are self-evident. And now, Ukraine.

The fight is on. Hopeully John Varoli’s piece helps us continue assembling the pieces of our resurgence as people united under God, and who brook no trust in any form of human elitism whatsoever.

Ukraine’s Only Chance for Peace and Prosperity

NATO fuels the fire of war and enjoys seeing Russians and Ukrainians kill each other. Ukrainians must rise up. Zelensky has to go. Neutrality must be embraced. Otherwise the country will be destroyed.

I’ve been working with both Ukraine and Russia for 31 years. During that time, I noticed that many in the American establishment hate both countries. I am speaking about people with whom I met personally; not something I read on the Internet.

Theirs is both a hatred of Slavs as ‘Untermenschen’ and the Orthodox Christian faith. But the hatred towards Ukraine has always been more intense. Make no mistake, the American establishment watches with glee as Ukraine burns.

Nevertheless, those same elites today call Ukraine a bulwark of ‘democracy’ and risk the future of the human race in a military confrontation with Moscow. Today, Ukraine is only useful as a pawn to be sacrificed in the USA’s global conflict with Russia.

Over the past decade I’ve been involved with efforts to support and promote Ukrainian culture and business. During those years it was nearly impossible to find influential supporters and investors in the West. I even approached rich Ukrainian-Americans. Again, no interest. In fact, some have an aversion to their ancestral homeland, because they saw it as “too Russian”.

Some Ukrainian-Americans, the descendants of Nazi collaborators, even told me how they relished the idea of a conflict with Russia, to get revenge for past crimes such as the Ukrainian famine, (for which they wrongly blame Russians, instead of the Soviet regime that included many Ukrainian communists).

“We’re ready to see Ukraine burn to the ground” in a war with Russia. That’s what they told me, a testimony to their stupefying level of spite and imbecility.

Mind you, they’re living in luxury in suburban New York City. It’s not their house burning or children killed.

If this current war continues, Ukraine will be utterly ruined and its eastern and southern territories will be taken. Economic ruin will follow and educated young people will continue to flee the country. Only the elderly, infirm and least educated will remain in Ukraine.

Under the leadership of Vladimir Zelensky and his unholy group of oligarchs and nationalist extremists, Ukraine is on the road to destruction. Those people have stashed billions of dollars in foreign bank accounts, as well as have a second citizenship. The average Ukrainian doesn’t have those luxuries and pays the price.

Zelensky’s regime has shut all opposition parties, shut all independent media and wages a terror campaign against anyone who speaks freely and wants peace.

But only the Ukrainian people can save their country. They must rise up and build a new government that’s inclusive and free, one that seeks peace and reconciliation with Russia. You can’t change geography. The two countries are neighbors with a very large border. Ethnically and linguistically they’re ‘first cousins’ and share the same religious faith.

Ukraine and Russia will have to make peace. It’s inevitable. Even the USA and Mexico made peace after many decades of conflict in the 19th century, when the USA annexed one-third of Mexico’s lands. So why not make peace sooner rather than later?

Ukraine should be wise and commit to neutrality, just like Finland after World War 2. (BTW, if Finland joins NATO, then it too will face a horrible future). Also, Kiev must let its predominantly ethnic Russian regions go their own way. And in doing so, it can focus on developing those regions that truly want to be Ukrainian.

I can already hear the hysterical screams of Ukrainian extremists and their unhinged western allies — “John, you’re a Putin stooge!”

My answer is: “No, you’re the Putin stooge. Your stupidity and unwillingness to compromise has brought the fury of the Russian Bear down on Ukraine. Your hatred and fanaticism are ruining Ukraine.”

Ukrainian extremists pose an existential threat to the well-being and future of the Ukrainian people, as well as to all of Europe and the entire world.

These extremists don’t represent the Ukrainian people. They espouse a hateful, evil ideology with roots in the Nazi era of the 1930s and 1940s. In fact, they collaborated with the Nazis, (photo above), and massacred hundreds of thousands of Jews and Poles.

Throughout the past 30 years I always enjoyed visiting Ukraine. On my last visit in March 2019, however, I felt the evil in the air. People were very aggressive and I was harassed by nationalists because I had previously lived in Russia.

That’s how irrational Ukrainian extremism can be — any connection to Russia makes you an “enemy”. And in a country where half of the people speak Russian as a first language, that’s a recipe for strife and ethnic cleansing, as we’ve seen in Donbas.

The Ukrainian people must be smarter and wiser than their current rulers. They need a new government that will keep Ukraine neutral. Just like Finland, Ukraine can become strong and prosperous by acting as a bridge between East and West.

If the West truly had Ukraine’s best interests in mind, it would agree to this plan. For over a decade, Moscow has been willing. Why won’t the West? Because, the West is hell-bent on fighting Russia, and Ukraine is its expendable pawn.

If Ukraine doesn’t break free from NATO’s grip, then the country is doomed.

And that promised video from Dr. Steve, which IS related to the current war, too – all it takes is a little bit of thinking to see how this is so.

Seraphim Hanisch is 100% right about the west hating SLAVS, Ukrainians and Russians equally. When Canada had a similar internal conflict in Quebec with its first settlers from FRANCE who spoke their own language and had their own culture, made the Anglos pretty angry, but it never ended in war, only a political Agreement. So many Military and Political couch potatoes, who have only left their couch to visited the Grocery stores for Food and Beer in the last five years may have read some books and are suddenly called upon as EXPERTS. In order to qualify for an interview… Read more »

There is no such thing as “Ukrainian culture”. Everything worth mentioning from that part of the world is Russian. Every novel, painting, song, church, .. everything. What is called the Ukrainian culture is an anti-culture. People who call themselves proud Ukrainians actually don’t know who or what they are, all they know is they’re not Russians. The very foundation of the Ukrainian house is Russophobia. You take it away, there is nothing else to hold the house together, it simply collapses. True Ukrainians are neither brothers nor first cousins to Russians, they’re their mortal enemies. So these so called Ukrainians… Read more » 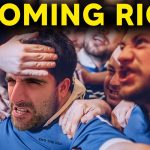