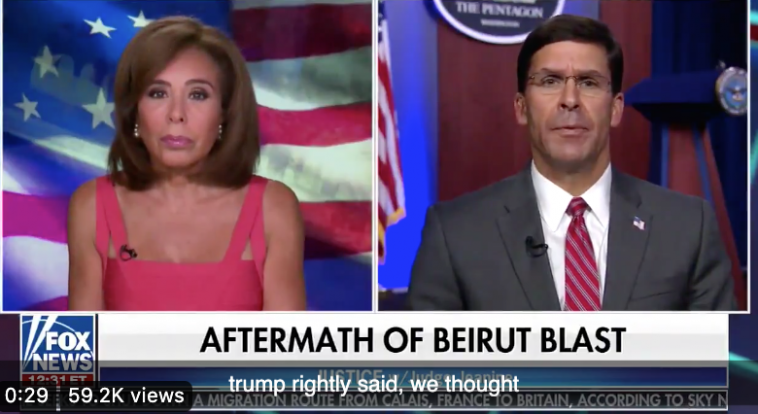 Last night on Judge Jeanine, Defense Secretary Esper called it “regrettable” that “some in the media” were trying to divide him and the president over the Beirut explosion by just pointing out that he said it was probably an accident while Trump said it looked like an attack. pic.twitter.com/F5IuZE21pw

US Defense Secretary Mark Esper appeared on FOX Saturday evening to explain the discrepancy between official Lebanese government statements that the Aug. 4 Beirut port explosion was an accident based on severe “negligence” and President Trump’s initial statements in the aftermath that it was a “terrible attack”.

Trump had raised eyebrows in saying at a White House press conference in the hours after the tragedy that left over 150 dead, while referencing his generals: “They seem to think it was an attack. It was a bomb of some kind.”

In the days after both Trump and the Pentagon tried to walk back the statements, now with Esper in the weekend FOX interview saying that ultimately it was not clear whether the explosion was the result of “a deliberate attack or an accident”.

Lebanon government being a gift from the Western power, it has devolved into a triple-theocracy manipulated by the richest of the rich in Lebanon, truly a system of bribery unequaled since the beginning of civilization.

I fully support Hezbollah.
And so, why can’t both you and I be right?

It would be naive to think that Mossad WEREN’T aware of this warehouse full of ammonium nitrate. Bibi and Trump both need a war, preferably with Iran, before November…

I find it strange there just happened to be a camera pointing straight at the site of the explosion.

Yes Tim must agree,in fact there is another camera shot from a different angle. The other thing is Anfo starts to break down the minute it is mixed,doing that much damage after all those years i don’t think so. An air blast digging a hole like that i don’t think so, that is a bomb crater.

Esper is just one more jew who is destroying America with his violence and lies. This was obviously a mini-nuke attack of ~25 kilotons courtesy of Mossad. Since Esper is part of that genocidal team and is a jew who owes his first allegiance to his jew buddies in Israel, treasonous Esper is all lies like most all of the Government whores in America. Read about this nuke detonation by Mossad here – written by an explosives expert in fascinating detail:

Fly on the Wall

Gee, you think Esper might have some ‘inside info’?

It would not surprise me at all if, at a later date, it became known that israel has it’s hands in here.

Word is that it was Israel Mossad.

LEBANON — ROOT CAUSE OF CORRUPTION

In democracy, when the 51% most wealthy always vote to hoard all the land and wealth, thereby creating the 49% working-poor, how can any kind of government ever change things for the better? 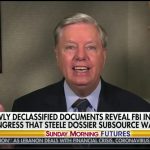