During Joe Biden’s presidential campaign, there was a wish expressed to create a “League of Democracies” that would be able to fight against the global rise of authoritarianism, and I remembered having read something on the subject before. I read about it back in 2004, in the book called A New World Order, by Anne-Marie Slaughter.

According to the book, America should create an “alliance” or a “league” of democracies sharing similar ideology that would first cooperate with the United Nations in addressing threats to international peace and security and later completely replace the UN.

Slaughter also argued that a “federation of democracies” could run the world, that highly centralized non-governmental actors would be able to impose their will on weakening countries, and that the intergovernmental identity could be replaced by the identity of supranational social groups within broader integrating communities.

I realized that, in accordance with Slaughter’s proposals, the United States were creating a closed political and economic world that was supposed to be patterned on the centralized imperial system and accept America’s unconditional global hegemony. That also implied considering the rest of the world, that wouldn’t accept America’s global hegemony, authoritarian enemies.

So how is that possible?

I’d like to start by saying that what concerns me most under current circumstances is Europe’s role and future. I wonder whether there’s any room for Europe’s interests in the US proposals. Let’s take a closer look.

The United States and European allies trained and armed Ukrainian military forces to the teeth before the operations in Ukraine started. These armed forces had been preparing for eight years, and for eight years they’d been bombarding Donbas. 14,000 people have been killed, including hundreds of kids.

And in the meantime, the United States and the EU kept imposing economic sanctions on Russia. However, those sanctions did not have the anticipated effect.

The Ukrainian forces began to send troops to the boarders of the self-proclaimed republics of Donetsk and Luhansk and started massive rocket artillery firing before the beginning of the operations in Ukraine. Russia recognized independence of the republics, quickly transferred hundreds of thousands of refugees from those territories and after that got into direct confrontation with Ukrainian armed forces.

Then, by imposing sanctions, Western countries began an economic war of an unprecedented scale against Russia. It’s been just over a month and a half, and we can assess the impact it has already had.

First, it is now clear that the Unites States and even more so Europe simply cannot do without a wide range of critical goods that until recently have been imported globally from Russia.

The EU gets about 30 % of its oil, 40 % of its natural gas (Austria, Germany and Hungary, up to two-thirds of gas), 15 % of petroleum products, 60 % of coal, and 70 % of metallurgy products from Russia. No doubt, Western embargo on such products will cause a real inflation and energy supply shock.

Finally, Russia and Ukraine together have been supplying more than 25 % of the world’s wheat, being the main wheat suppliers. Banning the export of wheat or even its supply reduction will cause a severe food crisis, primarily in the importing countries of Africa. There’s no doubt that this crisis and the hunger it will provoke will cause another mass refugee outflow.

These refugees will obviously head toward Europe, not the United States or Britain. Europe, on the other hand, barely handles receiving 7 million refugees that have recently arrived from Ukraine.

New harvest hasn’t yet started, but disrupted supplies cause wheat prices to hit record highs. The lack of grain could hardly be compensated by increasing import from other regions of the world. Fertilizers are essential for a successful harvest, but Russia is one of top three key global exporters of chemical fertilizers—urea, nitrogen-phosphorus-potassium compound fertilizer, ammonia, nitrogen solutions, and ammonium nitrate.

Fuel prices displayed at American and European petrol stations, household energy prices, and food prices have increased by 50 % to 200 %. That’s why Europe is showing a fierce resistance to US demands to ban Russian oil and gas imports completely.

Meanwhile, the United States have been trying, with little success, to find alternative oil suppliers for themselves and gas suppliers for Europe. However, Venezuela, Saudi Arabia and the United Arab Emirates have rejected US requests to increase oil supply.

Qatar has stated that, in order to provide Europe with extra gas, a new gas tanker fleet should be built. Moreover, Europe does not have sufficient regasification and storage capacity to absorb further flows of Qatar liquefied natural gas. The same applies to American liquefied gas, which is much more expensive than Russian gas.

Meanwhile, Europe puts up with the situation but keeps supplying Ukraine with weapons. These are mainly Soviet weapons that have been stored in NATO countries that used to be a part of the Soviet Union. There’s almost nothing left of them, and the United States call for deliveries of new, mainly American, weapons to Ukraine. The US military-industrial complex is thriving and receiving super profits…

As we see, many countries, including almost the whole Arab world and giants like India, Brazil, or the Republic of South Africa, still resist the pressure from the United States. The only region that is more or less subordinate to the United States is Europe, which has already suffered from forced anti-Russian sanctions in a number of ways:

– by facing a severe energy crisis, that’s forcing companies to halt operations at hundreds of factories

– by experiencing skyrocketing inflation, that has driven up the prices of all consumer goods and key services

– by facing a growing number of refugees, that need to be provided with shelter, food, and clothes

And this is just the beginning, these are only the first signs of the growing economic shock caused by sanctions.

The United States, that have very limited trade relations with Russia in terms of their nature and volume, are now looking for new European markets and selling excess gas there. The States are also launching a new program of “NATO rearmament,” which involves the use of US extra-profitable military-industrial complex to its full capacity, and keep making weakened EU countries more and more dependent on their “unconditional imperial hegemony.”

Both the UN and the WTO, that are supposed to be rather concerned by what’s happening—from the outbreak of war to a pile of illegal unilateral economic sanctions—are standing quietly on the sidelines.

Europe disappeared at 12 midnight on 2000. Now it’s an American colony called the EU 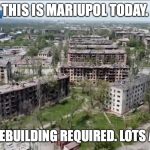