Anyone looking at a map of the Belt and Road Initiative will notice that Syria, Iraq and Iran’s stability and active participation are vital for this world changing program to function. Anyone not realizing that this program of win-win cooperation is in direct anti-thesis to the neocon paradigm of “a clash of civlizations” would be blind to the very essence of world history and modern events. 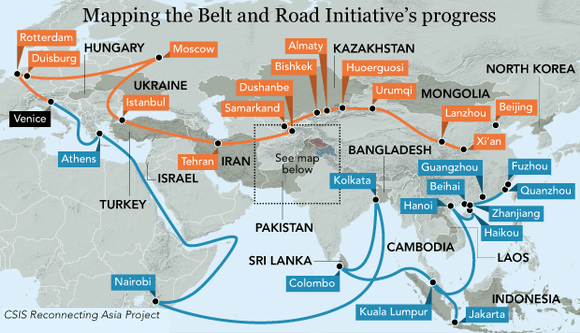 Recently, EIR Southwest Asia Coordinator Hussein Askary gave a powerful interview with Syria Times where he described the Anglo-Zionist forces whose dystopic vision for the Middle East and world at large has been disrupted with Russian and China’s collaborative presence in the region:

“These forces have been upset with the victories achieved in Syria and Iraq to clean the country from the U.S. and British-backed terrorist groups, and finally pave the way for the integration of the region into the Belt and Road Initiative / New Silk Road from China, through Central Asia and Iran to Iraq then Syria and the Mediterranean. President Bashar Al-Assad just two weeks ago declared that the Belt and Road Initiative is Syria’s way to reconstruction, and revealed that Syria has six strategic mega projects in this regard. The Iraqi Prime Minister, Adel Abdel-Mahdi was in China in late September and signed many significant agreements to exchange oil for reconstruction of infrastructure. This was a revolutionary development.”

These under-reported developments of the New Silk Road’s progress through the Middle East are vital to understand anything about the world, including the mass-protests calling for the Iraq government’s ouster, the western-backed regime change in Syria or the current dangerous events in Iran. The fact that President Trump has to deal with a largely independent CIA and Military Industrial Complex committed to undoing his aim to stop the “forever wars” has made it difficult for people to understand what is really going on inside the USA itself.

Askary has been invited to various Arab governments in recent years to present development plans for the Middle East and Africa under the Schiller Institute’s World Landbridge Report which develops upon the global extension of the New Silk Road across all continents as a replacement to the collapsing uni-polar world order. Askary’s translation of the report into Arabic is available here, which also includes access to Chinese, Spanish and the original English versions.

His recent presentation on the Anglo-Zionist operation in the middle east and the Silk Road is worth watching for its depth of insight into causes and solutions to the greatest crises facing humanity.

Askary has also begun a new online course teaching the science of Physical Economy to Arab speakers which can be accessed here.

Matthew Ehret is the Editor-in-Chief of the Canadian Patriot Review and has authored 3 volumes of ‘Untold History of Canada’ book series. His works appear regularly on The Duran, Strategic Culture, Sott, Fort Russ, Zero Hedge, Global Times, L.A. Review of Books, LeSaker.fr, Vigile Quebec, South Front and Veterans Today. He is a correspondent/BRI Expert for Tactical Talk. In 2019 Matthew co-founded the Montreal-based Rising Tide Foundation. He can be reached at matt.ehret@tutamail.com

“Anyone looking at a map of the Belt and Road Initiative will notice that Syria, Iraq and Iran’s stability and active participation are vital for this world changing program to function.”

I keep my fingers crossed that the Belt and Road will be finished, including Syria, Iraq and Iran. It will be such a great advantage and progress for all of Asia, even reaching out to Europe, too.

that map makes little sense.. It is just political talking points and shows that China does not trust Russia