1) The Government spends and taxes in its own free floating fiat currency. It no longer accepts euros (or any other currency) in payment of Government (central and local) fines, fees, taxes, imposts etc.

3) No compulsory conversion of euro contracts into new currency contracts. It is enough to establish a level of demand for the new currency (giving it extrinsic value) through sound tax policy and adjust supply of said currency to the desired price.

4) Levying a short but drastic bank holiday to prevent bank runs on euro liquidity during the switch phase from euro to new currency. The holiday should start on Friday after business hours to make use of the following two day weekend. It would be a ‘black fast’ holiday, in which electronic transactions would be suspended and ATMs unplugged.

5) Temporarily (or permanently) reducing the capital requirement for banks to avoid or minimize the threat of insolvency. This improves their equity position and allows them to borrow more liquidity should they need it. Asset side regulations for banks ought to begin immediately after the switch to the new currency is done. See the Bank Behavior & Purpose section of this article for a full list of these regulations.

6) Scrapping regressive taxes in favor of taxing economic rent. Eliminating taxes on sales, on labor, on man-made things (buildings and other improvements to the land), and on enterprise, while putting in place negative deadweight taxation (which adds efficiency to the economy) like the land-value tax. This type of taxation prevents asset price speculation, it keeps the value of property stable, increases incomes and profits in real terms, it reduces inflationary pressures, and idleness is discouraged / penalized.

7) The Government will have to run appropriate budget deficits in order to supply the non-government sector with net financial assets denominated in the new currency.

8) The Government, through a public agency or through the Central Bank, will provide full deposit insurance, but only to deposits denominated in the new currency. Deposits in foreign currency will not be guaranteed by the State.

Withdrawals could be allowed after they can be treated as foreign currency debited against new currency deposits according to the prevailing exchange rate. Some commentators have stressed the need for tougher capital controls, like banning domestic firms and households from purchasing foreign assets, or holding bank accounts outside their own country. Such drastic actions would be unnecessary and would likely do more ill than good. Substantial capital flight would occur in just a few days anyway. Ergo, if the banks were closed for this period and electronic transactions and cash withdrawals were blocked, the most damaging aspect of capital flight (liquidity crisis for the banks) could be averted.

Plans of dropping the euro should be kept secret for as long as possible – and capital controls should be lifted quickly after the switch to the new currency has materialized. Note: by capital flight I mean massive unidirectional flow of funds from the country in question to the external sector over a short period of time. Naturally, there’s a big risk that word of Exit will get out ahead of time. In life there are no ideal situations, only opportunities, and we each try to capitalize on them to the best of our ability.

If a bank’s net worth (equity / capital) falls below the legal minimum, it has to go into bankruptcy reorganization. Should the Government take it over, it has the option of selling the bank as an operating business, or selling off its assets. Both of these scenarios can lead to large losses for shareholders. If losses are high enough, depositors will take a hit too. Losing a quarter in value during a liquidation is not unheard of. Deposits denominated in the new currency should be fully guaranteed by the State, but deposits in euros will be at risk, just like before.

This happened in Argentina in 2002 and in Iceland in 2008. It goes up fast, then comes back down equally fast, as the two graphs below indicate. 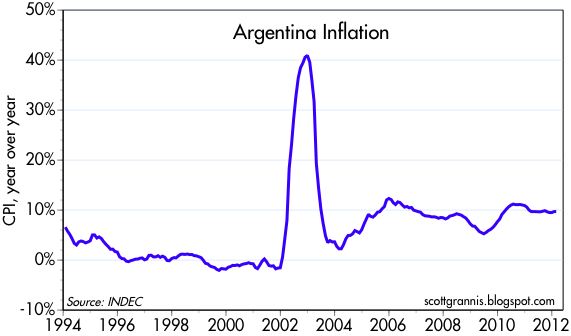 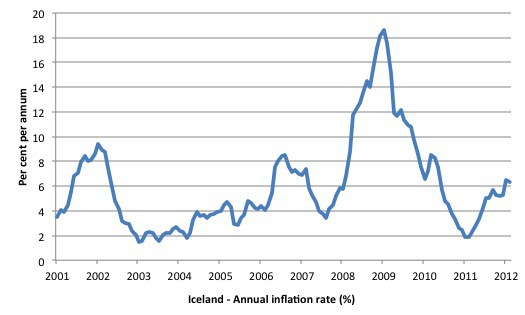 The key factors are two: the amount of idle or unused production capacity, plus the quality of the anti-trust laws and the level at which they’re enforced. The latter element protects against cartels forming in the economy and imposing high prices on consumers. The Euro-Zone Periphery states have substantial spare capacity. To contain the risk of a wage price spiral, inflation indexation schemes (which tie wages and pensions to prices) should be curtailed. Inflation indexing was prevalent in Brazil and Argentina during their episodes of hyperinflation from decades ago.

If everything is done right, there shouldn’t be a drastic lack in demand for the new currency. Still, if companies have loans outstanding in euros, they may need to convert some of their profits from the new currency into euros to service these debts. If their income falls in real terms, they will incur losses.

If firms get their inputs from the domestic economy, they’ll be able to purchase them in the new currency. If these inputs come from abroad (imports), it will cost them more if indeed the new currency does depreciate when introduced. Higher costs for firms will be passed down to consumers.

That country which leaves the Euro-Zone should convert its public debt in the new currency and negotiate haircuts as well. This prevents the Government debt to GDP ratio from going up (see Argentina in 2002, and Russia in 1998). Government debt to GDP going up isn’t bad in and of itself, so long as it serves public purpose. Fattening rent-seekers with interest, however, falls outside this purpose. Note: by Government debt I mean all the money that the Government spent in existence – in whatever form that money takes – that has not yet been used to pay taxes. The European Central Bank and Financial Stability Facility should follow the (long established) precedent for official creditors to accept an equivalent level of debt reduction to the private sector. Note: the above mentioned European institutions are pretty much euphemisms for German political elites chiefly, and French political elites lastly.

How to tackle this issue? According to one’s philosophy, there’s the free market approach and the dirigist approach. Each have their merits and drawbacks depending on context.

The free market approach means the Government simply allows creditors and debtors to negotiate debt restructuring while maintaining an equitable distance between the two parties involved. Each company’s situation is different. Many firms can stand to lose from a devaluation of the new currency, but others would stand to profit due to the size of their assets and revenues denominated in foreign currency (euros especially).

Still, the courts might not be able to handle a period of systemic bankruptcies; they may become congested with cases, leading to prolonged litigation. Some companies and creditors might have an interest in delaying a settlement, wishing to hold out for a better deal – thus running counter to the public purpose (a speedy and fair resolution). Slow progress in corporate debt restructuring may impact sovereign debt restructuring. This is where the dirigist (government intervention) method comes in. The Government may approach Euro-Zone banks to convert loans made to the Exit country’s firms from euros to the new currency. Thus, recapitalization happens fast and their exposure (aka risk) is lessened.

The Implications of Monetary Sovereignty

That Government, spending and taxing in its own free floating fiat currency, has maximum space to conduct whatever fiscal policy and monetary policy it chooses. It can operate with negative equity indefinitely without risk of bankruptcy; and it can run the maximum fiscal deficit within the bounds of political and inflationary limits (technological and real resource constraints).

Leaving the Euro will saddle that country with a proportional part of ECB’s balance sheet with all the bad debt hidden there.

“That country which leaves the Euro-Zone should […] negotiate haircuts as well”
Fraudulent claims don’t have to be honored. If the Troika won’t accept, the Exit country can litter the press with headlines exposing the corruption [on all sides]. The European Commission will likely try to sabotage the Exit country’s efforts at every stage, maybe even going so far as to levy trade sanctions. That’s how neocolonialist institutions operate. By far the most scarce resource in politics and geopolitics is political will, however. What political party or movement has the brains and the balls to pull this off?

Sabotage is the main tool of pressure. Greece was sabotaged, while trying to exit the EU. And the GB will be sabotaged as well. Hard times ahead …

Varoufakis and Tsipras surrendered [lost the war] before ever fighting a single battle with the Troika when they took Brexit off the table ahead of any negotiations. The referendum’s NO result against austerity [which its authors didn’t expect to win] gave Syriza the legal and moral backing to initiate Grexit. What happened? They betrayed their electorate. Varoufakis, before accepting the Syriza ticket, wrote a ton against Grexit, equating a return to the sovereign Drachma as a doomsday scenario for Greece and painting all Grexiteers as racists. Varoufakis insulted everyone’s intelligence when he motivated his resignation as Finance Minister, by saying… Read more »