On November 22nd, America’s Associated Press (AP) news-agency headlined “IOC call with Chinese tennis star Peng raises more questions” and reported that “Concern grew in the last week for the former No. 1-ranked doubles player — who hadn’t been seen since accusing a senior Chinese official of sexual assault on Nov. 2.” Two sentences later, it revealed that, actually, “On Sunday, the IOC said Peng spoke to its president”; so, the reader’s reasonable concern (given that opening) that maybe Ms. Peng had been killed or imprisoned for having gone public with her accusation turned out to have been wrong. Then, after around yet another 600 words, this article started getting to specifics: it said “The tennis star accused a former member of the Communist Party’s ruling Standing Committee, Zhang Gaoli, of sexual assault.” 200 words later still than that, came the statement: the person she accused on November 2nd, Zhang Gaoli, had, in fact, “left public life about three years ago after being one of seven members of the Politburo Standing Committee — the apex of political power in China.”

This entire confusingly-written thousand-word ‘news’-report was loaded with clear statements such as that “the ruling Communist Party is quick to blot out any criticism,” and it was clearly intended to cause readers to believe that that Party is more protective of its Politburo members than it is of its tennis stars. But the case for that was lacking in the article.

Nowhere in that diatribe against China’s Government was the key question even so much as just mentioned: Had Mr. Zhang been removed from the Politburo at least partly because he had engaged in behaviors such as this?  Was he, in fact, little different from many members of the U.S. Congress have been in that regard: removed from power because they had engaged in such behaviors?

Discussing that would have been a news-story — but not the piece of anti-China (and anti-Russia) propaganda that the U.S. regime and its ‘news’-media so routinely publish (such as this ‘news’-report against China actually was — not news but propaganda).

The AP ‘news’-report didn’t so much as even just look into whether or not Mr. Zheng had voluntarily quit the Politburo, or instead had been forced to leave it? Why was he now — and for the past three years — as the article first mentioned 600 words into it —  “a former member of the Communist Party’s ruling Standing Committee”? Doesn’t that “former” require an explanation, if this is to be a news-report, instead of merely a piece of anti-Chinese propaganda?

Answering questions such as this would have provided its readers with information that’s at least relevant to determining whether “the ruling Communist Party is quick to blot out any criticism” — or, at least, whether it is more so like that than America’s own two-Party rule by the billionaires who fund the Democratic and the Republican Parties is.

It’s no wonder, then, that we Americans are losing trust in ‘our’ ‘news’-media. As has been the case at least ever since 2003 when “Saddam’s WMD” started to become ever-so-gradually exposed to have been based entirely upon lies in order to ‘justify’ invading a country that had never so much as even just threatened America — Iraq. These ‘news’-media very clearly have been, and today are, actually propaganda-media, and they don’t, at all, deserve to be trusted as being anything more than that.

This news-report about America’s news-media is being submitted to all of them to publish. Perhaps some of them will now start to report how atrocious and untrustworthy virtually all of them actually are — so that they can now start to become not that way.

They won’t take yes for an answer. Peng Shuai has made TV appearances, talked to the IOC but what ever they ask for, isn’t good enough when it happens. It is quite possible that this media pressure has resulted in the Chinese relenting but once the anti-China circus gets going, it is all hands on deck to prolong the story for as much and as long as possible. This morning, Al Jazeera (Femi Oke) asked a Chinese official, without any knowledge of Chinese law, would there be an investigation into her alleged abuse? But what investigation would there be if… Read more »

I remember a news report that the US bombed a house a known terrorist was living in and killed him. Two years later while scuba diving in Thailand I became friends with a family that finished that story. It was really a tale of heroism. These 4 women had had all the males in their family killed in that bomb attack. They had been working in the family business located on the ground floor of that 10 story Apartment building that terrorist was living in. Yes, they blew up the entire building and killed hundreds. But only one was reported.… Read more »

Thanks for pointing out that typo. I’ve now corrected it. 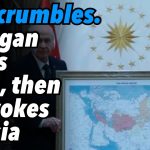