In the old adage “Never let a crisis go to waste”, governments everywhere are using the pandemic opportunity to:

Their enablers in this are the mainstream media and Big Tech, who have formed an ideological simpatico to form and control public opinion. You may have heard the expression Overton Window, which defines the allowable spectrum of opinion and the limits beyond which public discourse is not permissible. When the institutional scaffolding of a system begins to buckle, and when the credibility of traditional sources of mainstream news go into secular decline, the Overton Window constricts.

Of the Government / Mainstream Media / Big Tech triumvirate, only Big Tech is on the ascendency. It seeks to carve out an indispensable role of one manner or another in the next world order which has been emerging for over a decade, and is now accelerating amid the pandemic.

The components of The Triumvirate do understand viscerally, what has been known by those who seek to retain power since Edward Bernays wrote his blueprints for controlling the public mind back in 1920s (those were “Propaganda”, “Public Relations” and “Crystallizing Public Opinion“)

“The conscious and intelligent manipulation of the organized habits and opinions of the masses is an important element in democratic society. Those who manipulate this unseen mechanism of society constitute an invisible government which is the true ruling power of our country. …We are governed, our minds are molded, our tastes formed, our ideas suggested, largely by men we have never heard of.

This is a logical result of the way in which our democratic society is organized. Vast numbers of human beings must cooperate in this manner if they are to live together as a smoothly functioning society. …In almost every act of our daily lives, whether in the sphere of politics or business, in our social conduct or our ethical thinking, we are dominated by the relatively small number of persons…who understand the mental processes and social patterns of the masses. It is they who pull the wires which control the public mind.”– Propaganda, Chapter 1: Ordering Chaos

Not to put too fine a point on it,

There are invisible rulers who control the destinies of millions. It is not generally realized to what extent the words and actions of our most influential public men are dictated by shrewd persons operating behind the scenes.

Now, what is still more important, to the extent to which our thoughts and habits are modified by authorities.

In departments of our daily life, in which we imagine ourselves free agents, we are ruled by dictators exercising great power”.

The narrative must be controlled, it must be shaped and deviations from it must be curtailed and marginalized. As I say in my book, Unassailable (now free, see below),

“The ramifications of successfully asserting one [narrative] trajectory over any other challengers may never be fully grasped by the public at large.”

This occurs through repeated accusations of  the “conspiracy theory” monicker, or blaming everything that goes wrong on Russian meddling, white nationalists and the like. It even looks like narrative enforcers even go so far as to cherry pick the most absurd elements and participants out of a given area of concern and amplify those, so as to “poison the well’, so to speak against an entire stream of debate around a given concern: 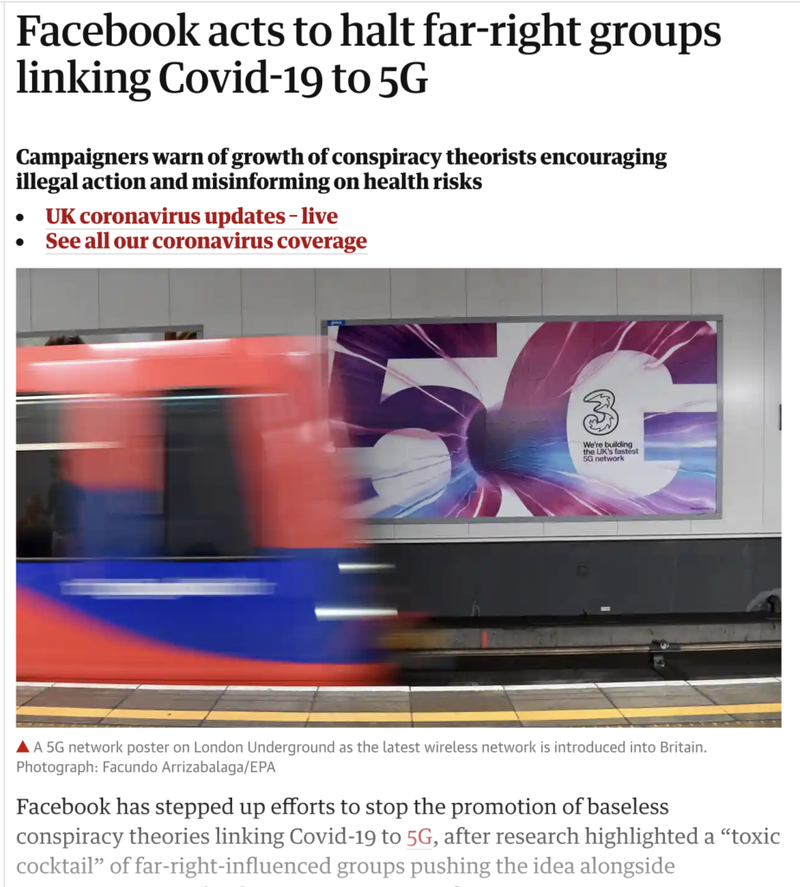 Thus, nobody respectable will ever take a serious look at possible concerns around any debatable  aspects of COVID-19, 5G, or anything that doesn’t originate from an official source like the WHO. Because from here on in if you even talk about an “off-limits” topic you will have your name linked to the most reviled and ostracized elements of society via negative branding:

“One of the most favored propaganda tactics of establishment elites and [those] they employ … is to relabel or redefine an opponent before they can solidly define themselves. In other words, elites [and their media] will seek to “brand” you (just as corporations use branding) in the minds of the masses so that they can take away your ability to define yourself as anything else.” (emphasis added)

We see a similar dynamic among evangelical environmentalists, where anybody who expresses any skepticism toward computer models that are put forward as incontrovertible truths, or that the “New Green Deal”-style remedies proffered are the only possible course of action are labeled “deniers” and witch-hunted. (If you’re curious as to what a New Green Deal, Greta Thunberg-style radical decarbonization program looks like, what is happening now is just a modest hint of what that would be like. I would recommend Alex Epstein’s “The Moral Case for Fossil Fuels” to get an example of  alternative approaches around how to think about environmental issues. I say this as someone who believes the medium-to-long-term trajectory of humanity is away from fossil fuels. Paradoxically, one of the most viable near term substitutes available to us, nuclear and thorium energy, is also off limits for serious discussion).

If the marginalization doesn’t work, if the public seems resistant to mainstream media gaslighting, if the construct of hypernormalisation is in danger of being challenged or outright debunked, then matters get taken to the next level.

That’s when deplatforming and cancel culture come into play

As I mentioned in Unassailable,

propaganda comprises techniques and strategies to push elite approved narratives into the public mind and to have them accepted. Bernays deemed this a necessity of a smooth operating society. The other side of controlling the narrative necessitates the suppression of any contending streams of thought. That’s where deplatforming comes in.

As I’ve said elsewhere, and I’ll say it again here:

It doesn’t matter if you believe Coronavirus is real, fake, caused by 5G, a full moon, in a lab or eating batshit sandwiches, you should be able to believe any of those things and still behave civilly without disturbing anyone. What your beliefs induce you to do in the real world brings their own consequences and you should be prepared to deal with that.

But what anybody says online has to be sacrosanct. If you really want to protect the world from bad conspiracy theories then write a crash course in developing critical thinking skills and personal responsibility. Then give that away far and wide.

The fact is the internet is a type of gas release valve. People discharge angst, frustration, fear and sexual tension out through the internet because they think it’s a safe release. And it should be.

There are too many initiatives seeking to control that release and infringe upon real world liberties.

Right now things are extraordinarily tense and brittle. The global economy has all but ceased operating, essentially by decree. Millions of people have lost their jobs, countless businesses have shut down, many to never reopen.

To now step into the open forum of discourse and into the marketplace of ideas and tell people what is and isn’t permissible to believe and think is just adding more fuel to an already building pressure cooker that is primed to foment social unrest.

Unassailable: The anti-dote to Cancel-Culture and Deplatforming is now free

After being contacted earlier this week on behalf people who were deplatformed from Facebook who are trying to organize anti-lockdown protests and online dissent, I’ve decided to make my latest book, Unassailable: Defend Yourself from Deplatform Attacks, Cancel-Culture and Other Online Disasters free for download, for anybody.