This article is republished with the permission of the author.  First published by News Junkie Post.

The illusion of democracy

The Gilets Jaunes movement took most observers and so-called experts in France and worldwide entirely by surprise, but it was actually completely predictable. The crisis simmered below the radars of France’s politicians, media, as well as those who considered themselves the enlightened figures of the intelligentsia for 50 years. By their sometimes raucous revolt, the Gilets Jaunes understand that the current democratic process is a farce, and that democracy itself has become an illusion. France is hardly an exception but more the rule in a system where citizens are not truly represented or even heard: a corrupt and opaque system, where most politicians are in the back pockets of  global corporate interests which, despite campaign regulations, have found loopholes to rig elections through large money contributions and pseudo-neutral mainstream media coverage to influence public opinion. In France, the Macron administration should view the Gilets Jaunes and their bright yellow vests as thousands of irate canaries flying off a coal mine before an explosion. France’s new Sans-Culottes will not be satisfied any longer with crumbs, or even loaves of bread: instead they want control of the bakery. The Gilets Jaunes want more than money, food and stuff, they demand respect, dignity, and attention. The Vox Populi shall not be silenced! Not for trinkets or any price. 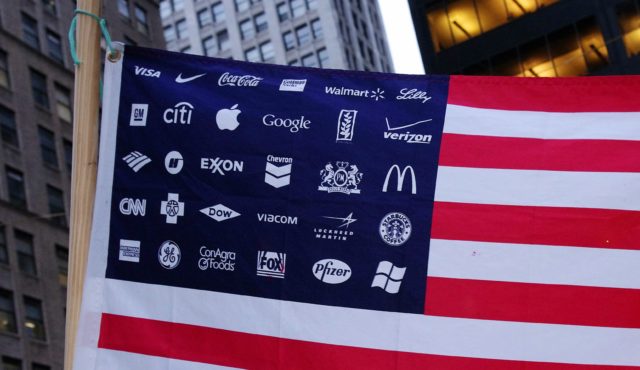 Democracy is moribund elsewhere. The United States, which is supposed to be the greatest democracy on earth, offers the unsavory option of two parties, Republican or Democrat, on its electoral menu. This difference, however, has become largely fictional, as the political class all belong to a cozy inbred Republicrat party of hand-picked plutocrats that serve corporate imperialism. This democratic illusion was duly represented in 2016 with two fake options, either Clinton or Trump, both disastrous. Which one was less repulsive to American voters? As we know, it was Trump who “won” the US empire’s election. In France, by the same power of the negative vote, Macron was elected more as a rejection of Marine Le Pen than an adhesion to his neoliberalism, youth, or vague impulse to modernize France, whatever it meant at the time. So the second round of the French presidential election of 2017 was also a futile exercise of lesser-of-two-evils. Democracy was dead in France, and one could take RIP to mean Rest In Peace instead of Referendum d’Initiative Populaire. Can the Gilets Jaunes key proposal of a Referendum d’Initiative Citoyenne save a comatose political system? 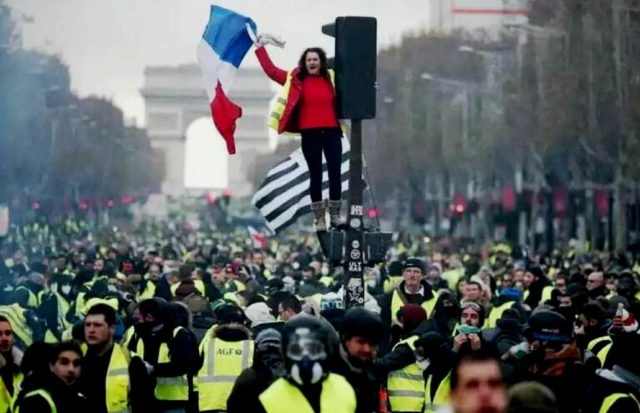 France’s fifth Republic is 60 years old. It was established by General Charles de Gaulle on October 4, 1958. This proud military man, without political ambition at first, had already salvaged France from the ignominy of the pro-German Vichy government, and he was called during the war in Algeria to rescue the Republic again from the preliminary stages of a coup plotted by a junta of four French generals. These generals were against Algerian independence and wanted to topple the French government. De Gaulle set his conditions clearly, as he wanted to reestablish the power of the executive. Some critics viewed this constitutional change as establishing some sort of hybrid republic-monarchy, but de Gaulle’s genuine love of France commanded respect, inside and outside the country’s borders, and France’s fifth Republic resembled its imposing father-figure general: short of being imperial, it was imperious. 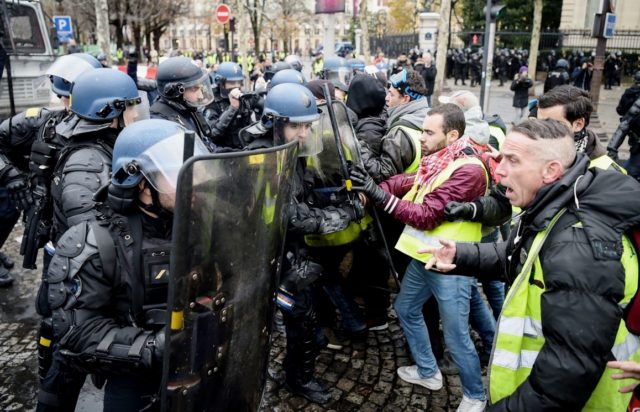 The Gilets Jaunes movement could mark the end of an era and the beginning of a French sixth Republic, where the excessive power in the executive branch is diminished. The French constitution has currently two types of referendums, both of them essentially top heavy. The first type, which can only be called by the president, has been used nine times during the fifth Republic; the second one, which was established in 2008, in Article 11 of the French Constitution, is a “referendum of shared initiative” and has never been used. It can be organized at the initiative of one fifth of the parliament and must be supported by at least 10 percent of the registered voters, currently 4.5 million citizens. However, this unused referendum cannot challenge the constitution.

What is the RIC requested by the Gilets Jaunes?

The Gilets Jaunes are calling for four types of RIC. Firstly, the ability for any French citizen registered voter to propose a law; secondly, the right to propose the abrogation of any legislation; thirdly, the ability for any citizen to petition for the destitution of any elected official; and finally the right to call for an amendment to the constitution. The Gilets Jaunes demand that the RIC become enshrined in France’s Constitution. Citizens would propose legislation through an independently monitored website. If such a legislative initiative garners at least 700,000 signatures from registered voters, it would have to be discussed, and potentially amended, by the National Assembly, which would be legally obligated, exactly one year after receiving the 700,000 signed petitions, to bring it to a national referendum. This type of direct democracy by referendums exists in the world elsewhere, in countries such as Switzerland or in the US in California. Recent examples are the BREXIT saga that is still unfolding in Great Britain and the fiasco of Catalonia’s independence vote. Referendums are not a universal panacea and can potentially be manipulated either by local political players or even foreign interests. 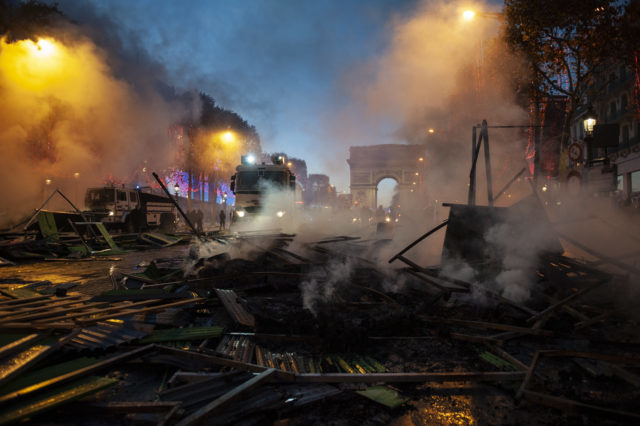 Switzerland, which has a population of 8 million, has applied direct democracy through referendums of popular initiative since 1848, with a staggering 309 referendums! While this has been overwhelmingly beneficial, as it keeps a constant citizen check and balance on government at all levels, it has on occasion drifted into unsavory Islamophobic and Orwellian measures. For example, in 2009, the country approved, through a popular referendum, a law that forbids the construction of minarets on Mosques. More recently, Switzerland’s citizens approved, by 65 percent of the votes, a state surveillance, including at home, of recipients of social benefits if they are suspected of fraud. In California, citizens’ initiatives put on the ballot made the use of marijuana legal, but on the flip side, such initiatives have also installed extremely repressive legislation such as the infamous “three strikes, you’re out,” which made recidivists of sometimes petty crimes, like shoplifting in a supermarket, rot in jail for 20 years. 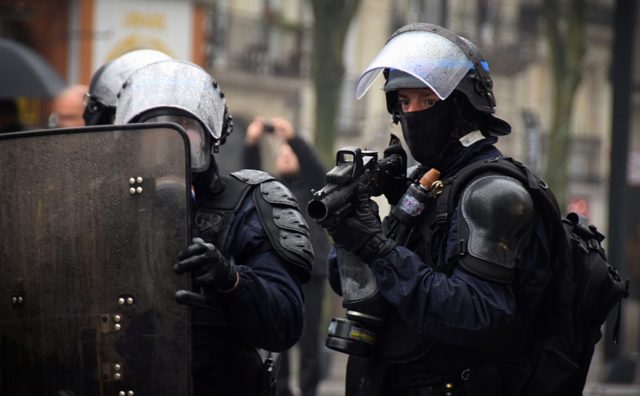 Many Gilets Jaunes have been chanting “Macron Demission!” Therefore, one can assume, and they are already gathering signatures to that effect, that forcing Macron to resign is at the top of their RIC shopping list. Another item, a double-edged sword to say the least, would be a FREXIT, or BREXIT made in France. Will Corsicans or Bretons petition for their independence like Scotland did a couple of years ago? Direct democracy in France is a thrilling proposition, providing that it is not motivated by meanness, anger, racism or is secretly financed by various entities. A reasonable system of checks and balances is the key to good laws, because often people are motivated to vote with their guts and not their brains. 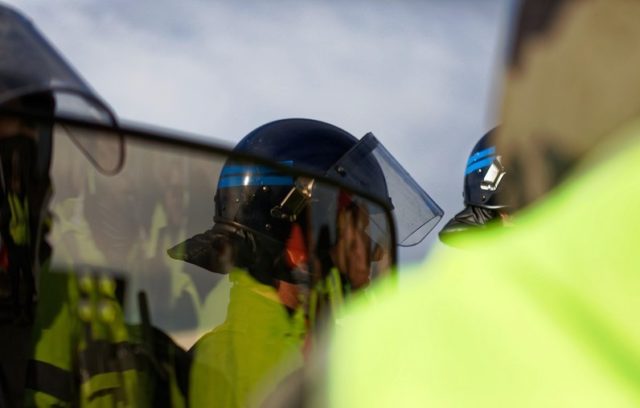 Editor’s Notes: Gilbert Mercier is the author of The Orwellian Empire.

Gilbert Mercier writes:
“In France … Macron was elected more as a rejection of Marine Le Pen than an adhesion to his neoliberalism, youth, or vague impulse to modernize France, whatever it meant at the time.”
No, this is wrong. Macron was not elected, the votes were rigged. Had they been counted right, Marine Le Pen would have won. She is liked and supported by a very large base of people in France. Please do not write nonsense, Gilbert Mercier.

Marine Le Pen is the only French politician whose popularity is augmenting. According to “Oxeda” polls, she has reached 59 percent now which is very high for France. At the next presidential elections she will win the presidency, if the votes are not manipulated again by the powers that be.

Gilbert Mercier, a French journalist, who has been living in the USA since 1983. How often does he visit the motherland? When was he last here, in France?