A recent article on Mises dot org, written by one Gor Mkrtchian makes the case for the privatization of public lands and elimination of the property tax. The article claims this “will further boost the voluntary stewardship of natural preserves.”

“The question is, what mechanism should decide how much and which land should be kept wild, and how much and which land should not for the sake of development, balancing the demand for wildlife preserves with the demand for all other goods? […]
The market has assigned to nature an enormous, multifaceted lot. Privatizing public lands while removing taxes on property and outdoor recreation will further boost the voluntary stewardship of natural preserves. Meanwhile, market freedom will also grant the flexibility to utilize portions of these parks to serve the consumers’ most pressing economic needs outside of nature preservation.”

The article argues under the false premise of ‘the free market’ that private agents will better manage productive land and land destined for conservation than state agents, be they federal or local. While the article notes the existence and work of land conservation trusts, it makes no mention of land-value taxation. More so, the article doesn’t mention the word “rent” at all!

So in fact, it’s arguing for a scenario in which landlords would be able to capture 100 percent the value of location [it was less than 100 under the property tax]. The article is arguing for a 100 percent private toll booth on the real economy [on labor and capital], a rentier excess charge slapped onto the cost of production.

Do you think the libertarians behind Mises dot org are the last bastion of Classical economics? Think again! They’re neoliberal as it gets. 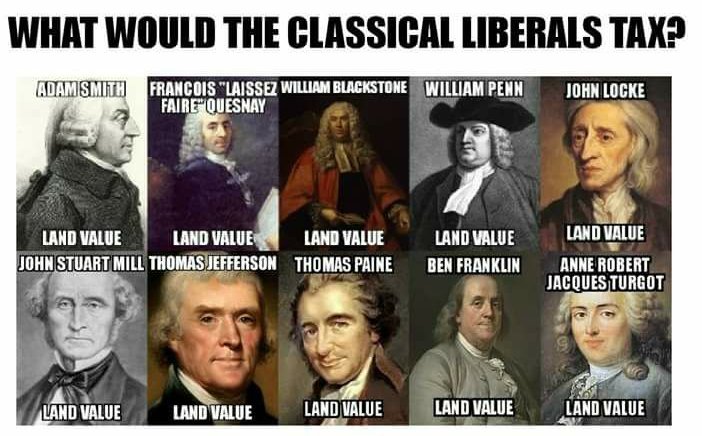 The property tax has indeed regressive effects on the economy. But the solution isn’t to simply eliminate it, but to replace it, alongside taxes on labor, sales, and enterprise, with a land-value tax [also called the site value tax, the tax on the unimproved value of land]. Every value of location left untaxed by the Government is free to be pledged to landlords as rent, or to money lenders as interest.

All landowners, be they firms or individuals, capture economic rent through the simple fact of ownership. A landowner who didn’t sell or doesn’t rent the land to others for a profit is ‘paying’ the imputed value of the ground rent [aka value of location] to himself or herself. A community land trust – and I fully support CLTs – ‘pays’ the imputed value of the ground rent to the home owners it serves, minus operation fees. This means the ground rent is retained locally and is not appropriated by the financial sector. Still, this doesn’t guarantee that the land owned by the trust is allocated and developed efficiently – nor does it guarantee that the imputed value of the ground rent, captured by the trust, is divided equally among the residents who generate it. While a trust can capture ground rent for itself, an example to the contrary is one that doesn’t charge any rent, instead it keeps out speculators using regulation. Such trusts [who don’t collect rent] are very poor and dependent on Government subsidies. But even in this case, the ground rent could still be said to have been captured by the individual members of the land trust, who have obtained housing through it, even if it doesn’t charge them any moneys deposited in a shared fund. The ground rent within such a trust is captured by private residents, not by the trust itself, hence, few improvements if any.

Land is NOT capital. Ownership of land automatically implies excluding someone else from it. The owner should pay for this privilege [of ownership], because he did not make the land, Nature/God made it. 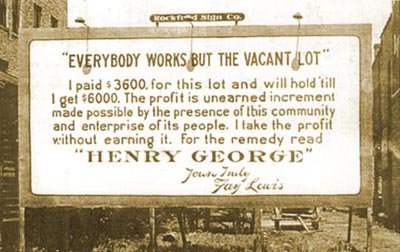 The best policy combination is land-value taxation + CLTs. Very important observations: Under fully phased in land-value taxation, gaining access to land in most cases will occur without any upfront cost. And land taken out of production would no longer be considered productive land, and would be exempt from the tax. Also, modern Georgists have incorporated pigovian taxation into the original Single Tax philosophy; so if someone tries to environmentally degrade [pollute] the land, in the hope that the State assessors will shrink the assessed land value figure, are going to pay the pigovian tax, for causing adverse side effects. Water and air [including the broadcast spectrum] are also categorized as land under the Georgist philosophy, because they make up the Natural Commons. And in cases of outright ecocide, in my opinion, perpetrators should face harsh sentences in jail, for a mere money fine, even large ones, are not enough to fit their crimes… Site value capture is morally just and has negative deadweight – it brings efficiency to the economy. 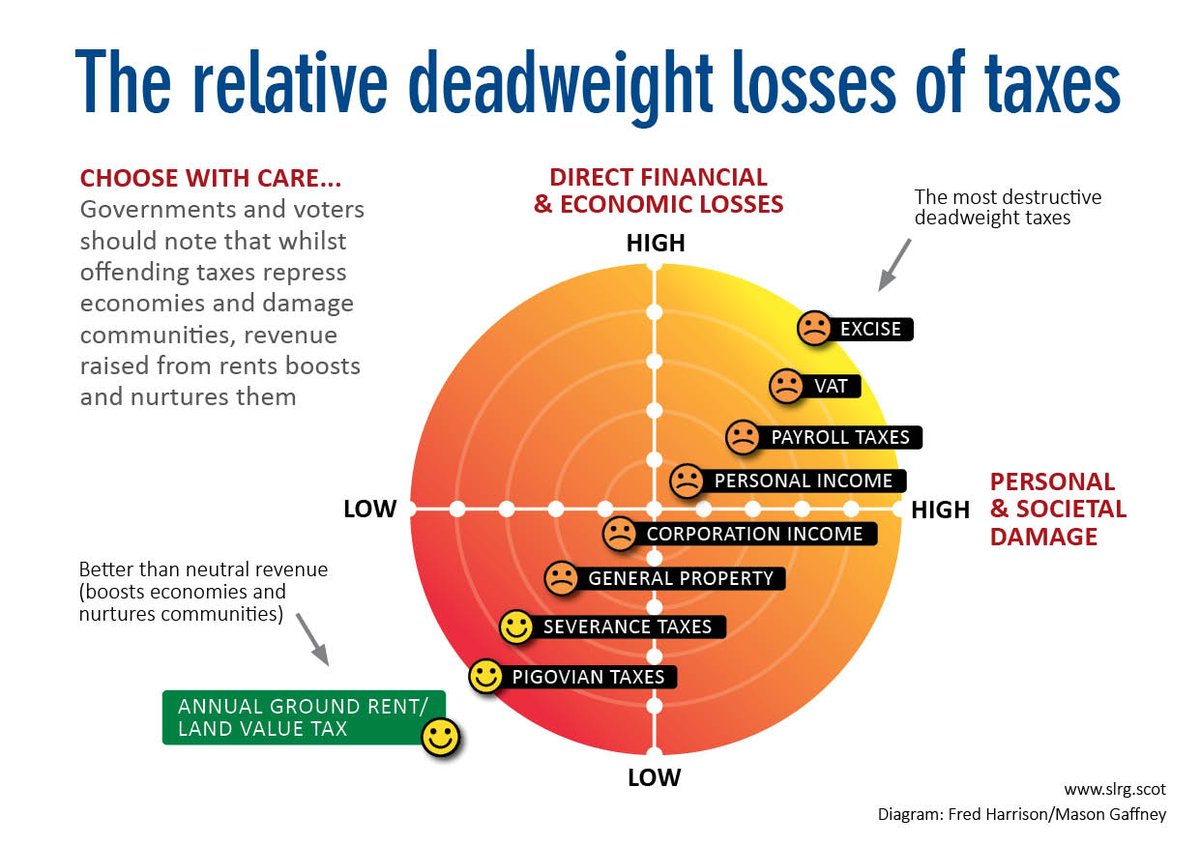 What the Mises institute through Gor Mkrtchian is arguing for in its article, with all the sweet, euphemistic and perfidious talk of voluntarism, is in truth a mega free lunch for usurers and rent-seekers! Wealth extraction! As if they’ve not been given enough free lunches in the recent past under Obama and Trump. The article also claims that the State is just horrible at managing assets. Oh, really? How do you square the fact that these vital inventions were birthed in the Government sector? For more info on successful Public Sector enterprises, I recommend this book by Mariana Mazzucato.

I’m so tired of the constant demonization of states and nationhood practiced by snake-oil-salesmen libertarians, who are so nostalgic over the feudal age, they work incessantly [alongside other globalist factions] to bring it about in the present as neo-feudalism. Just recently I heard a smug, libertarian from the US on RT’s Crosstalk, saying ‘let’s have open borders and no welfare.’ Utterly insane, satanically so. Satanists love social-darwinism. How about you have secure borders, regulated immigration, and welfare, and full employment, like in the golden age of industrial capitalism? An epoch over which even Noam Chomsky is nostalgic. Here’s what Carl Menger, the founder of the Austrian School of Economics had to say about the State’s role within the economy:

“Government thus has to intervene in economic life for the benefit of all not only to redress grievances, but also to establish enterprises that promote economic efforts but, because of their size, are beyond the means of individuals and even private corporations. These are not paternalistic measures to restrain the citizens’ activities; on the contrary, they furnish the means for promoting such activities; furthermore, they are of some importance for those great ends of the whole state that make it appear civilized and cultured.

Important roads, railways and canals that improve the general well-being by improving traffic and communication are special examples of this kind of enterprise and lasting evidence of the concern of the state for the well-being of its parts and thereby its own power; at the same time, they are/constitute major prerequisites for the prosperity of a modern state.

The building of schools, too, is a suitable field for government to prove its concern with the success of its citizens’ economic efforts.”

These are the same libertarians who got triggered when Trump said that the US can’t go bankrupt, because it issues its own money.
Libertarians hate double-entry bookkeeping & nation states.