Well, we can be certain there are a number of “tips” the federal government will ignore, especially beyond the borders of the United States. Prince Moosa is still around, and according to reports, mainly does his bidding for US illegal arms smuggling with al Saud & the Emirates … certainly the Federales won’t arrest this guy!

Bangladeshi arms dealer Moosa typically transfers restricted permit arms to Saudi Arabia and the Emirates. In the video Prince Moosa bestows his most amusing wisdom to those of us who may have fallen on hard times: (Video) Link: https://www.bitchute.com/video/904P5M5UYdWz/

…for Prince Moosa, consorting with the devil is of course the only way to go:

Another article and old favourite on illegal US arms trade is from 2009, this archived version is not behind a paywall: Link: https://web.archive.org/web/20161201200631/http://www.nytimes.com/2009/02/15/world/middleeast/15iraq.html?_r=1 Dale Stoffel is mentioned, and Stoffel was assassinated via mysterious circumstances in Iraq, December 8, 2004.

Stoffel: “Tens of thousands of US dollars stuffed into pizza boxes & delivered surreptitiously to US contracting offices in Baghdad, payoffs made in paper sacks that were scattered in ‘dead drops’ around the Green Zone..” (from the above link)

Stoffel’s company was Wye Oak, which took advantage of a largely corrupt Iraq Ministry of Defense which was also largely run by corrupt American corporate influence. After Stoffel’s assassination (by questionable circumstance) Raymond Zayna took over the illegal arms trade with US Iraq Reconstruction NGO’s. Connections exist to Prince Moosa here too, and likely introduced Moosa to the House of Saud, which had been arming al Qaeda in Iraq. Link: https://www.corpwatch.org/article/iraq-us-army-failed-investigate-warnings-corruption

The above sheds doubt on the US government’s official conspiracy theory concerning Stoffel’s death, where the shadow group in Iraq, so-called “Brigades of the Islamic Jihad” (not Hamas and not Palestinians!) have no verifiable factual information available. Another brigade, Rafidan, the Political Council of the Mujahideen claimed responsibility for the murder, perhaps because the security state’s remit is to muddy the waters as much as possible.*

The anonymity of the ‘Brigades of the Islamic Jihad’ indeed has the stench of CIA gore written all over it, but the CIA is above all law; and it appears that press inquiries into connections between Wye Group, CLI and Raymond Zayna alleged illegal arms dealing in Iraq were all shut down by it. Link: https://countercurrents.org/2021/01/iraq-biggest-corruption-scandal-in-history/

Raymond Zayna has not emerged as a suspect in Stoffel’s suspicious death, and cui buono connections are just murky enough that those questions may never be asked. Today, there are few journalists to ask such questions, and none are Corporate-sponsored, or mainstream. More on Stoffel: https://www.corpwatch.org/article/iraq-unquiet-american-and-murder-whistle-blowing-contractor

The Committee for the Liberation of Iraq founded by arch-Neocon Bruce Jackson (formerly head of PNAC) worked closely with Raymond Zayna and weapons sales via Iraq Reconstruction and the Iraq Ministry of Defense, in an incredibly corrupt alliance, led by US weapons NGO’s. Today the former offices of the Committee for the Liberation of Iraq are occupied by a more socially acceptable version of neocon/neoliberal mischief, namely Orion Strategies, once a front for Bill Kristol’s now-defunct Emergency Committee for Israel.

Such is the Beltway’s stench… Certainly consistent and certainly deep.

Perhaps embarrassing to write, it takes only brief research to accurately demonstrate the deep corruption and criminality at the heart of the west’s Security State. The speed via which the west is declining – hopefully to the Warfare State’s own destruction – promises that an in-depth history of its criminality and the need for its accountability, will likely not be realized.

*Via the post here https://www.albasrah.net/maqalat/english/0405/rafidan7_240405.htm Washington could easily do so. al Basrah blog is bizarre, with statecraft written all over it..

**Harks of an CIA terror alias name too!

** Orion Strategies, the CLI Committee for the Liberation of Iraq and Emergency Committee for Israel https://www.salon.com/2010/07/16/liberation_of_iraq_and_committee_for_israel/ 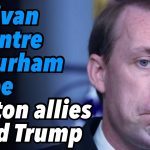