To illustrate how far things have fallen in the west, the prospect that one nation – any nation – may determine on behalf of any other sovereign nation the means by which it trades, is not only absurd, but supremely dangerous.

While this is no surprise to most people, when US threats of gunboats and sanctions fail to intimidate nations like China and Russia, then that creates a sense of alarm in US State. While the US B-team bandies about empty threats on the world stage  — Trump claimed he was minutes away from striking Iran for Iran’s defensive strike on a US Global Hawk RQ-4 on June 20th, then he backed down, full of doubt  — the US State Department is now preparing to issue a special use waiver to China, allowing China to purchase Iranian oil.

Now, the reason for the US waiver to China on Iranian oil imports is simply to save face, and prevent embarrassment: a) that the US has no control over China’s infrastructure or foreign policy and China can present its middle finger to the former United States quite freely and b) the fact that sanctions don’t really work long term. As examples, when targeted nations like North Korea or Cuba truly want to circumvent the US financial and military jack boot, then they will.

And for China to provide any means for Iran to escape America’s insane foreign policy role as treacherous double-dealer and Geopolitical ‘agent provocateur’ on behalf of Israel surely incites fear and loathing within the halls of US State… and not just within the B-team Executive.

Indeed, the US ‘B-team’ has given China a major source of leverage in trade talks now, where China can leverage the US incrementally away from its master Israel on the subject of Iran (by allowing China to import Iranian crude) while negotiating the trade war initiated by the United States.

From this backdrop, we must also consider the recent illegal seizure of the GRACE-1 by United Kingdom forces; that seizure was directed by the United States in its continuing effort to prove itself the most treacherous Bad Actor on the global stage. Gibraltar has firmly denied however that the ship seizure was at the direction of the US: 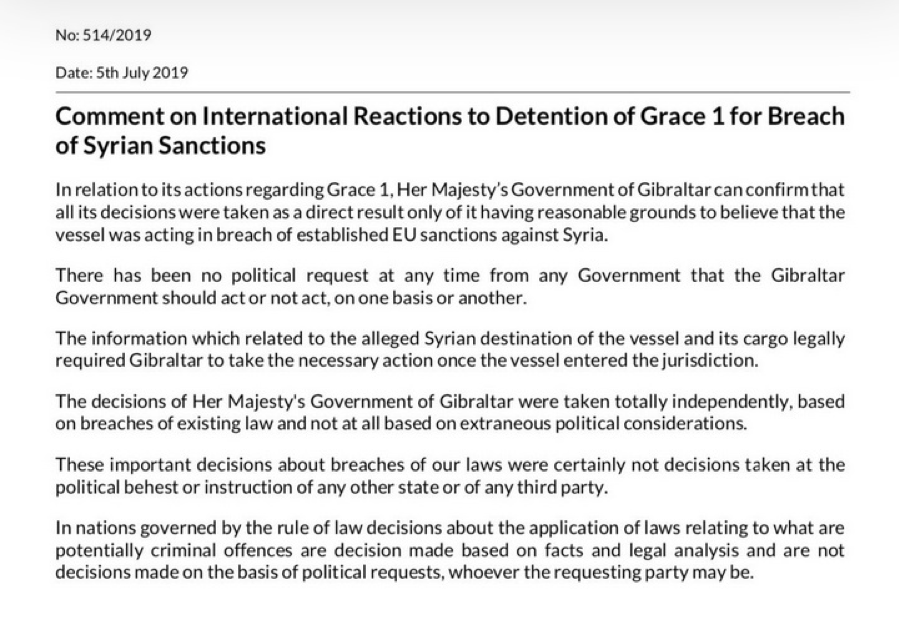 Whether the GRACE 1 tanker was operating beyond EU sanctions on Syria or not is certainly no business of the United States — and the move was certainly intended to inflame and provoke ill-will between the EU and Iran. Well, that’s just how the B Team operates.

A master chess player, Iran is now perfectly positioned to play its tactical rook.  While largely symbolic, the placement of that rook on the board (ie Iran potentially taking a UK ship in retaliation) poses a big new challenge to both the EU and US.  The B-team can only respond with more bluster and more war rhetoric toward Iran. That will confirm Iran’s position with regard to owning the moral high ground, while a demoralized and dispirited B-team can only rattle its limp sword. *

More to the point, is the reaction of Europe to US treachery in withdrawing from the JCPOA, where Europe could have poked its finger in the US eye, and refused to comply with secondary US economic sanctions on Iran.

The typical line is that European corporations prefer to do business in the US market, instead of Iran’s, given that ultimatum. But that’s not so. The ECB could easily guarantee payments to Iran and risk upsetting its relation with the US Treasury, and should do so on a far greater scale than simply founding a toothless INSTEX.

By failing to confront the US Treasury on Iran, the EU confirms its role as ineffectual and weak, a lap dog to the US and Israel, incapable of standing on its own, or effecting policy on its own.

Finally, we must consider that which we have always proposed: that US hubris and hegemonic arrogance will cause it to fail by its own hand one day – and no other. And the present course of the regime in Washington must ensure that outcome… the supreme irony being that Iran may be the means by which that outcome occurs!

*The danger to this tinder box of course is another Israeli or Saudi false flag versus ships in the Strait of Hormuz, as we saw last month.

I had a HUGE chuckle on this sentence “the US State Department is now preparing to issue a special use waiver to China, allowing China to purchase Iranian oil”. Partically the use of the term “allowing”. These a-holes are high on their own illusions of power!

The American Way
Reply to  TravelAbout

Well, China’s doing it anyway. Why not take the credit for it, false or not? You think the American public could tell the difference?

VFL
Reply to  The American Way

Taking Credit for everything, mostly of others accomplishments, is Trumps default MO, despite he and the Neocunt Psychopaths around him screwing every- and anything up big time in the first place.

TravelAbout
Reply to  The American Way

Your second question is no doubt a rhetorical one! 🙂

FlorianGeyer
Reply to  The American Way

The US has a long history of stealing other nations valor.

Holier than a Brahman Cow
Reply to  FlorianGeyer

Or pinning its own foibles, high crimes and misdemeanors on other nations. Sort of like everything your parents taught you not to do while growing up.

Angst on Parade
Reply to  TravelAbout

America’s geopolitical machinations today illicit sort of a triumvirate of emotion throughout the world. The Chuckle, the Scream and the Good Cry. You never know when one or the other will take front stage but rest assured. they’ll all get their play time.

US ‘foreign policy’, when not turning my stomach, virtually cracks me up. They, in cahoots with A, B and C, start out using salafist jihadis to overthrow Assad, not giving a second thought to the consequences of a Syria run by genocidal hopeless salafist fanatics, then when Russia and Syria clean up their mess, with Trump btw declaring it was all his work that IS was neutralized, their Plan B is to continue destabilizing Syria to oust Assad by starving it one way or another, even more emboldened because Syria and Russia have now in great part contained the forces… Read more »

Brilliant assessment by Steve Brown .The US will administer it’s own downfall and all because of it’s bestest friend ,Israel.
Little do they realize that once the parasite has used up it’s host , it will just move somewhere else.The Zionist Christians can find another cloud upon which Jesus is said to be coming back to damn the wicked during Armageddon .

Thank you for your support ! …I’m sure the two Alex’s and the Duran have our eternal gratitude and support too! regards

Yes, you’ve all done a fine job and kudos to you all, but in all honesty – your jobs are sort of like shooting fish in a barrel. The world is awash in America’s foreign policy intrigues, blunders, miscalculations and machinations. You can barely turn around these days without tripping over one.

China refused vassaldom and won. India should follow suit. Russia never stopped trading with Iran. The EU caved to its own fear as usual. Iran kept its agreements until they couldn’t reasonably be kept anymore as a free people. Which makes it clear who are the world’s nations that are reliable partners and who are not. Ironically the US and its allies that make up the so-called “International community” and the equally so-called “free world” make up the world’s most unreliable and most destructive elements! It is these destroyers and cowards that we call the paragons of “true democracy”! No… Read more »

The Chinese offered their thanks but with a side note that a few dozen gallons of oil were missing and were tracked by Chinese satellites to have been delivered by FedEx to the homes of Trump’s sons and son in law. FedEx became a bit suspicious as the packages were marked ‘toiletries’ and thought they might be breaking some Trump sanction or other but a call from the WH assured them they were properly labeled and good to go.

USITC
Reply to  The Fonz

Hair gel is a toiletry? I’ll have to check the HTS code on that.

Magic Man In the Sky
Reply to  USITC

The Mouse that Roared

Quote: “the recent illegal seizure of the GRACE-1 by United Kingdom forces; that seizure was directed by the United States ”

But the UK has adamantly stated recently that it acted absolutely independently without US pressure or mandate and that all illegal seizures were dreamed up strictly behind Whitehall’s own curtains . If you can’t trust Whitehall’s interior decorators, who can you trust?

John Bolton
Reply to  The Mouse that Roared

FlorianGeyer
Reply to  The Mouse that Roared

“By failing to confront the US Treasury on Iran, the EU confirms its role as ineffectual and weak, a lap dog to the US and Israel, incapable of standing on its own, or effecting policy on its own.”

In spite of everything that has happened in the EU in the last five years, its member states contrived to select four politicians who embody total continuity with all the policies that led the EU into this mess in the first place.

The EU is a eunuch: lots of talk but no action.

I thought EU was originally derived as shorthand for eunuch. Have I been misinformed?

LOL, you’re correct on that one!

The clock is ticking on the Jew-nited States. Wait until the Petro-dollar falls on its face.

Please stop repeating the fallacy that Israel controls US policy or anything else. Israel is the servant; it takes the money and the orders. The charade of Israeli bullying big, soft America is for local consumption not your int’l audience, who know better.