Authored by Mike Shedlock via MishTalk: 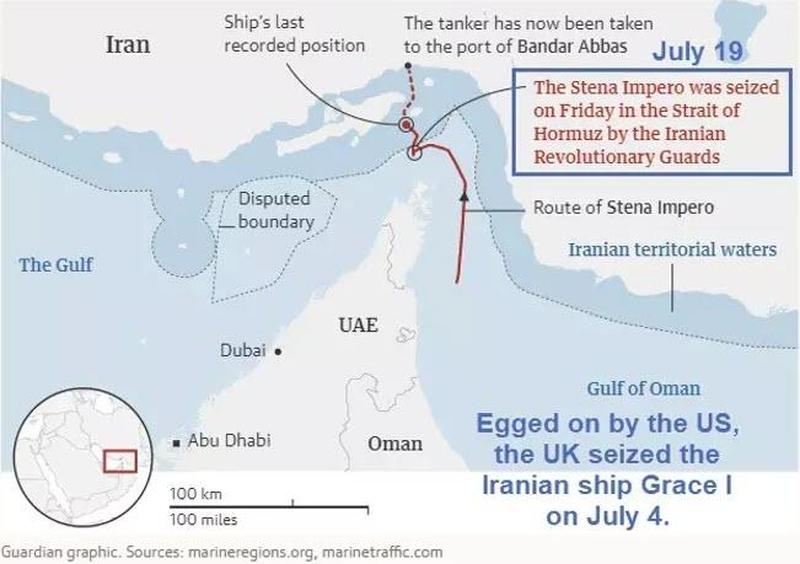 Eurointelligence provides interesting commentary of tit-for-tat ship seizures first by the UK, then by Iran in response.

The extraordinary story behind the capture of the British-flagged oil tanker Stena Impero is a cautionary tale on many levels. It has the potential of turning into a major diplomatic calamity for both the UK and the EU.

Simon Tisdall tells the story in the Observer that this confrontation was masterminded by none other than John Bolton, Donald Trump’s national security adviser. Several weeks ago, US intelligence services tracked an Iranian oil vessel headed for the Mediterranean, bound for a refinery in Syria. The Grace 1 sailed under a Panama flag. As it was too big for the Suez Canal, it undertook the longer journey from Iran around Cape Horn and up the Atlantic towards Spain. Washington alerted the Spanish government 48 hours before the tanker was due to enter the Strait of Gibraltar, but without giving any details that the ship might be in breach of US sanctions. The Spanish Navy escorted the ship but took no action at the time. Spain later said it would have intervened if it had been given information that the ship was in breach of US sanctions.

Bolton instead tipped off the British, who felt compelled to intercept the Grace I as it entered the Strait of Gibraltar on July 4, dispatching a force of 30 marines who stormed the ship.

The US managed to accomplish three things at the same time: escalating the conflict with Iran; dividing the Europeans by pitching the UK against Spain, which distanced itself from the UK manoeuvre off Gibraltar; and turning the UK once again into the useful idiot of US diplomacy. Not bad for a few days’ work. But it is also a clear indication of the EU’s total lack of preparedness to deal with a hostile Trump administration.

Unsurprisingly, the EU’s response is divided. Spain is furious about the UK’s unilateral action in international waters off the Spanish coast. The EU’s external-action service, soon to be headed by Josep Borrell, Spain’s foreign minister, is silent. Germany and France are backing the UK – at least diplomatically – for now. Russia, Japan and China are with Iran. They do not want to risk oil supplies.

Excellent news: UK has detained the supertanker Grace I laden with Iranian oil bound for Syria in violation of EU sanctions. America & our allies will continue to prevent regimes in Tehran & Damascus from profiting off this illicit trade.

Bolton’s delighted reaction suggested the seizure was a surprise. But accumulating evidence suggests the opposite is true, and that Bolton’s national security team was directly involved in manufacturing the Gibraltar incident. The suspicion is that Conservative politicians, distracted by picking a new prime minister, jockeying for power, and preoccupied with Brexit, stumbled into an American trap.

In short, it seems, Britain was set up. As a result, Britain has been plunged into the middle of an international crisis it is ill-prepared to deal with.

Much of this angst could have been avoided. Britain opposed Trump’s decision to quit the 2015 nuclear deal with Iran, the trigger for today’s crisis. It has watched with alarm as the Trump-Bolton policy of “maximum pressure”, involving punitive sanctions and an oil embargo, has radicalised the most moderate Iranians.

Yet even as Britain backed EU attempts to rescue the nuclear deal, Theresa May and Jeremy Hunt, foreign secretary, tried to have it both ways – to keep Trump sweet.

Eye for an Eye

The Financial Times comments on the ‘Eye for Eye’ Ideology Behind Iran’s Seizure of UK Tanker.

“Eye for eye and hand for hand is our Islamic ideology. An American eye or a European hand are not more valuable than an Iranian eye or hand,” said Mohammad-Sadegh Javadi-Hesar, a reformist politician.

Nothing But War Will Do

Bolton wants war. Nothing less will do.

To get it, he is willing to radicalize the Iranian moderates and trap allies into doing his immoral bidding.

I am sick of this administration’s war policy and treatment of allies.

“As it was too big for the Suez Canal, it undertook the longer journey from Iran around Cape Horn and up the Atlantic towards Spain”.

That should be “the Cape of Good Hope”. Cape Horn is at the southern tip of South America, as every school child used to know by the age of 10.

There will be no charge for this free subediting.

“Spain later said it would have intervened if it had been given information that the ship was in breach of US sanctions”.

Why? If true, this implies that the Spanish government no longer claims independence or sovereignty, but takes orders from a foreign government.

Moreover, of course, such an intervention would have been illegal and, as such, an act of war.

As many others have pointed out, since Iran and Syria are neither in the US or the EU no US or EU sanctions apply to them. Unless the sanctions originate from the UN they’re simply illegal.

The former United States engages in acts of war all the time and claims sovereignty over the world, so what’s the confusion here.

“Russia, Japan and China are with Iran. They do not want to risk oil supplies”.

That second sentence sounds like evidence-free conjecture. To my mind, a far more likely explanation is that they respect the law and abide by it.

Russia is one of the world’s biggest oil exporters. It has no need to worry about oil supplies from the Gulf. China has been arranging for some years to import vast quantities of oil from Russia. Japan is a US possession, rather like Puerto Rico, so its views don’t matter.

China gets cheaper oil from Iran than it does from Russia. China has already been sanctioned (Zhuhai Zhenrong) by the guy with his jaw wired shut (if only) for importing Iran’s oil, and China has stated it will continue to do so anyway.

Taking a rather larger view, the tanker Grace 1 would never have had to undertake her lengthy voyage if the cheap, fast, direct route for oil between Iran and Syria were open – a pipeline.

Partly, but a multiplicity of reasons may exist for war, US oil interests may not be the sole motivation. For example Israel has been at war with Syria in one form or another since 1948, and considered itself threatened by Saddam too. Bibi’s Goon Squad was recently ‘given’ the Golan (illegally I might add) and with the West Bank claims etc, would love to see either chaos or a west-friendly regime in Syria, not only the US.

One sure way to make the Limeys shut up and mind their own business: buy them a few pints and start a bar fight over which Russian oligarch owns the best football team in England.

Very informative article from the Guardian for a change. Just a guess, but wouldn’t the US want to wait for the new PM to be in charge and somewhat settled in, before provoking Iran along with Britain? Waiting for BoJo perhaps? Perhaps that’s the reason Bolton/Pompeo are keeping relatively quiet about Iran right now…

AM Hants
Reply to  Steve Brown

Remember the role Boris played in ‘Russia Gate’, when he was the Foreign Secretary? Now it is pay back time and he will no doubt be the most loyal Prime Minister, the UK has ever had, to the US.

He is a back bencher now. Sadly, Boris, his first action, was to say they we will send our inflatables to the Persian Gulf, to assist the tankers. Well, it is not as though we have anything in working order, for the Navy to send. Better still, we should keep out of it. Ironic the timing. Mueller report and not to mention UK Government helping Clinton to arrive in the White House. Then following a Royal invitation, Donald Trump is hosted at Buck House. No doubt, some very interesting conversations, concerning ‘Russia Gate’, which is why the UK Government of… Read more »