We’ve reached the next stage of the EU’s evolution, whether it will adopt a common bond market or not. It’s been clear for a long time that something had to change if the European Union was to survive its political transformation.

And that issue is the formation of a shared debt structure underpinning the euro, commonly referred to as Eurobonds.

But in light of the current crisis they’ve been given the euphemism, “Coronabonds” and sold that way ad nauseum in the financial press, especially by Bloomberg.

Why? Because that’s the next step that’s been on the docket for a long time; pushing the EU to its breaking point and waiting for just the right moment to bulldozer what’s left of national sovereignty in Europe in the name of saving lives.

It’s truly stunning how inhuman political leaders are in this world. This is not to say I’m surprised but it’s still stunning.

This has zero to do with actually fighting the disease at this point. Just printing money and backing it with shared responsibility bonds is fundamentally no different than printing money locally to do the same thing.

It’s still not addressing the real problem… Europe is broke. Its bond market is non-functional under a negative interest rate regime.

The only way to bring legitimacy to pricing these ‘coronabonds’ is to have the ECB be an unlimited buyer of them.

And how it that supposed to build confidence in them exactly? I guess the EU actually agreeing about anything I suppose is good news?

A teleconference among EU leaders last week ended in apparent white-hot fury as the bloc remains completely split on the issue as it has been for decades.

The map from Bloomberg below hasn’t shifted with the COVID-19 crisis despite the hopes and strong-arm tactics in recent months by ECB President Christine Lagarde and French President Emmanuel Macron. 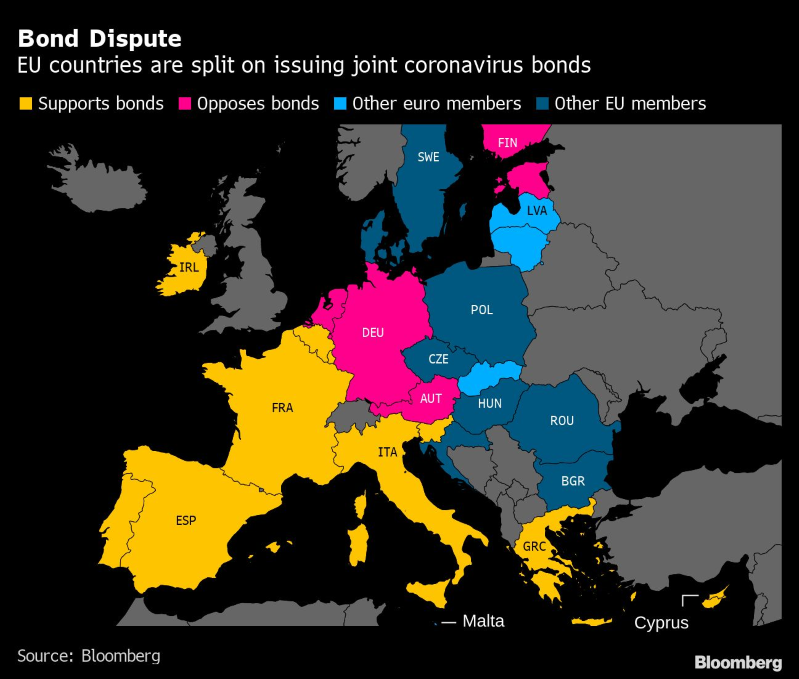 And with German Chancellor Angela Merkel’s political capital nearly spent the only position she can take so as to not be thrown out of power is to accede to the domestic fiscal conservatives.

No surprise there. If you are looking for anything resembling leadership from Merkel you need a trip to the eye doctor. Merkel represents stasis and little else. She is committed to that because she can’t do much more.

What’s worse is that she has done everything imaginable to remain in power at a time when decisive action from Germany is needed one way or the other.

Merkel’s classic dithering in the face of difficult choices is just one more source of instability across the EU political and financial landscape giving investors the heebie-jeebies.

She cannot be seen as siding with France, Italy and Spain in bailing them out of their bad choices. But she really wants to. That’s why she pulled so many strings to help the globalist government in Italy led by Giuseppe Conte block Lega’s Matteo Salvini from taking over.

But those countries’ bad choices were born of the structural inequities built into the structure of the euro in the first place. And those structural problems were always leading us to this moment.

Had Salvini forced new elections and took over, by now, he would have made an uncomfortable choice for the EU, which would have been introduce a domestic parallel currency, the mini-BOT, while Italy faced this crisis mostly alone.

The crowd in Europe screaming “moral hazard” over bailouts are absolutely right. But, at the same time, they have to accept responsibility that the debts they are owed need to be written down substantially and the whole idea of a pan-European union chalked up to a bad idea and ended once and for all.

Now, given all of this, what’s fascinating is that even the immediate threat of COVID-19 and the draconian shut down of vast stretches of the European economy hasn’t budged either side from their position.

That doesn’t bode well for the future of the European Union in its current form. The northern bloc has hardened its stance. The U.K. is gone. And with its independence it is showing many countries in the EU what that independence gains them in terms of flexibility and nimbleness in dealing with the virus.

It’s not that the U.K. has made nothing but good choices but it’s far freer to adjust its response to the crisis than any of the EU member states who are trapped in an ossified and unresponsive bureaucracy more interested in virtue signaling about core European values than they are about saving the lives of the people whose values they are supposed to represent.

They keep trying to put a brave face on their disagreements. Read the Bloomberg article I linked to above, there is nothing but downplaying of the contempt these leaders have for each other at this time in there. They are facing real human crises and Emmanuel Macron is worried about the future of the Schengen Treaty and eurobonds.

Well, of course he is. I’m sure he’s also hoping COVID-19 wipes out members of the Gilet Jaunes in greater numbers than those loyal to the French state. But all deaths will be a bailout to the French state pension system, so, it’s all good there too.

The contempt Macron has for humanity is palpable. Honestly, he should really spend more time with Mike Pompeo to compare notes on how to wrap that contempt in a thin veneer of unctuous self-righteousness.

It’d be an improvement, frankly.

Macron is the one driving this virtue signaling, anti-human bus over the cliff. He was chosen for the job. And he chose Lagarde to force the evolution of the ECB.

The problem is the mask has slipped. No one is buying what they are selling in this crisis. To use a true humanitarian crisis for cynical political gain is depraved. And yet, that’s where we are and not just in Europe.

But its effects are most pronounced there because of how fundamentally unbalanced the playing field is between members.

Conte in Italy is in lockstep with Macron to politicize this as much as possible to pressure Merkel into caving in. But in the end he may face the reality that he’s failed. That will spell his end in Italy when the worst of the crisis is over.

For Merkel, I don’t think it will be up to her because the opposition to this stretches beyond her control. And she won’t be able to pull the same trick Helmut Kohl did to unilaterally pull Germany into the euro-zone without a vote.

But don’t think she won’t try.

In a crisis even incredibly unpopular leaders stay in power simply out of a perceived need for stability until it’s over.

That’s why there is this urgency to get this done now. Because Macron and his ilk know the window will close on them quickly if they don’t.

Install the Brave Browser if you want to keep talking about it in the face of Big Tech Tyranny.

NYC is conducting a masssive ‘trial’ by using Dr. Raoult’s treatment for the Coronavirus. No, it will not save every 99-year-old with emphysema, even though they are ‘counted’ as having died of the dreaded CV. But, it will make enough of a difference, that sensible people can begin to fight the mass hysteria.

Well, unlike the US that can just give an order to fire up the printing presses, the EU can’t so easily issue such an order.