“We will be forced to open the gates. We cannot be forced to handle the burden alone,” Turkish President Recep Tayyip Erdogan warned on Thursday while demanding that European countries give political support to his controversial ‘safe zone’ plan in northern Syria.

Ankara is currently in tense negotiations with the United States over Erdogan’s plan to militarily carve out a large swathe of territory along the Turkish-Syrian border which would serve as a buffer zone of sorts where US-backed Kurdish militias could not operate.

Erdogan said one million refugees could settle in the new buffer territory, thus alleviating the crisis on Turkish soil, and ultimately for Europe as well.

Turkey sees the YPG core of the Syrian Democratic Forces (SDF) as a terrorist extension of the outlawed PKK. Turkey has of late vowed to carve out the proposed ‘safe’ territory on a unilateral basis if it can’t make progress with Washington.

Also during the speech Turkey’s president complained his nation “did not receive the support needed from the world” to help it cope with the refugee crisis through the eight-year long war.

Erdogan issued a ‘with us or against us’ ultimatum to the world on Thursday:

“You either support us to have a safe zone in Syria, or we will have to open the gates. Either you support us or no one should feel sorry. We would like to host 1 million refugees in the safe zone,” he said.

It goes without saying that the territory in question is not his to control or dole out, and Damascus has slammed what it sees as a big Turkish land-grab.

Turkey has pressed hard for the proposed safe zone east of the Euphrates for the past year (‘safe zone’ envisioned in blue in map below): 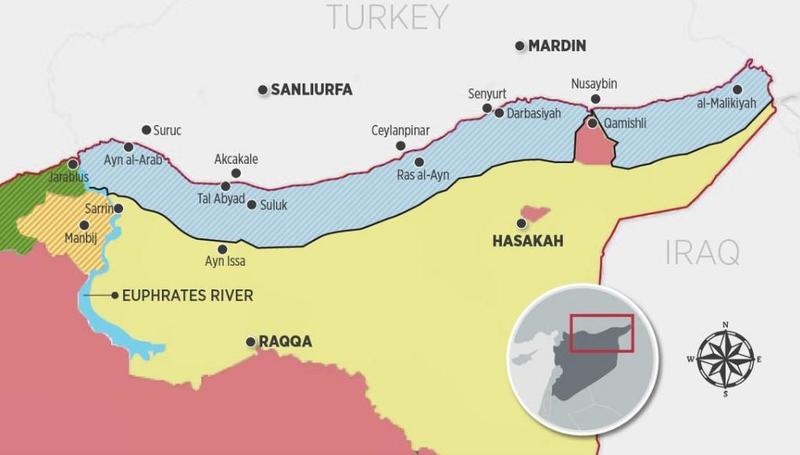 It’s also the case that many analysts see Turkey as a prime external party to the conflict that’s done more than any other to exacerbate and prolong the war, including fueling the rise of ISIS.

Turkey’s president previously claimed the country has spent a total of $35 billion on hosting some 4 million Syrian refugees, but that the European Union hasn’t upheld previously agreed to commitments under a refugee settlement plan.

It’s not the first time Ankara has threatened to allow Syrian refugees and migrants to leave for EU countries and it likely won’t be the last, but it’ll be interesting to see if Erdogan’s blackmail will witness any positive movement out of Europe.

Threatening to??? Hell that was the plan in the first instance…and NOT only from Syria where ISIS did an excellent job of weeding out the “infidels”….

The EU Reaps What the US Sows

That’s a serious threat. What percentage of ‘refugees’ that refuse to return to Syria are bona fide terrorists?

Steve Brown
Reply to  The EU Reaps What the US Sows

Yeah like Abu Yousef the Syrian suicide bomber who wreaked havoc in Germany in 2016. That’s why the US government won’t let Syrian, Afghan, or Libyan refugees into the USA. The Failed States of America creates the world’s problems for $$, then insists everyone else must deal with the fallout.