2020 began with the visit of Greek Prime Minister Kyriakos Mitsotakis to the US and will be marked by Ecumenical Patriarch Bartholomew’s historic visit to America. Within some two months, there also took place a meeting of Geoffrey R. Pyatt and Deputy Minister of Foreign Affairs Kostas Vlasis and the latter’s trip to Washington where he attended the events organized by US Secretary of State Mike Pompeo for the International Religious Freedom Alliance. So, this year is remarkable for an exceptional development of Greek-American relations, particularly, in terms of religious freedom.

In view of this, the previous period of close ties between Constantinople and Washington comes to mind – the times when Athenagoras Spyrou of blessed memory was the Archbishop of America and later the Ecumenical Patriarch.

The centralization of the Greek American Archdiocese’s administration, emerging role of the Clergy-Laity Congress, creation of the Greek Orthodox Ladies Philoptochos society, St. Basil Academy, the foundation of the first Orthodox seminary in the US, consecration of the Archdiocesan Cathedral of the Holy Trinity – these are the results of Athenagoras’ 18-year-long archbishopric tenure.

As the Ecumenical Patriarch, Athenagoras first of all is remembered for his contribution to lifting the mutual anathemas of the Roman Catholic Church and Constantinople in 1964. He also contested the autocephaly of the Orthodox Church of America granted by Moscow arguing that autocephaly cannot be granted unilaterally but must have the consent of all the Orthodox Churches, and rebooted the process of planning the long-awaited Great and Holy Council, organizing a series of pan-Orthodox conferences that helped thaw relations between the Orthodox countries in the Soviet orbit and those outside of it.

Besides, however, he was an active advocate of Western values and a fierce opponent of communism which prompted him to cooperate with the American intelligence.

As historian Matthew Namee, editor at the OrthodoxHistory.org, mentioned in a recent series of his articles, new unclassified CIA documents show that Athenagoras’ ties to the US intelligence and diplomacy were much closer than it was supposed before.

During World War II Athenagoras, elected in 1930 the head of the Church of America, closely collaborated with the American intelligence. In particular, as mentioned in a memo of March 26,1942, by Ulius L. Amoss, an intelligence agent of the Office of Strategic Services, the CIA’s predecessor agency, the Archbishop of America assured him that three Bishops, three hundred priests and a large and far flung organization under his order were at the OSS disposal.

A few weeks after that, on May 14, 1942, the OSS head William J. Donovan himself thanked Athenagoras for cooperation, “The reports and descriptions of Greek-American youth of military age so kindly undertaken by you are coming in in splendid volume. The care with which Your Grace has managed this important service is of great interest to our armed services and I wish to express my deep appreciation for your loyal and patriotic assistance.”

In an OSS report prepared sometime in early 1945, Archbishop Athenagoras, Albanian Bishop Fan Noli and the Serbian Bishop Dionisije Milivojevich are listed among its key contacts with whom it is possible to “talk intimately and as frequently as needed.”

Against this background it becomes clear why, when the Cold War began, the CIA strived to replace Patriarch Maximos V, enthroned in early 1946, with Athenagoras. The Agency described Maximos as too weak to be an effective leader of the Orthodox world. American and Turkish mass media wrote about the 48-year-old Patriarch’s emotional disorder, Soviet diplomats’ attempts to persuade him to cooperate and a possible involvement of Patriarch Maximos in the embezzlement of a big donation which took place during the patriarchate of his predecessor Benjamin I.

In 1948, the 62-year-old Archbishop Athenagoras of America was elected the new Ecumenical Patriarch. The CIA described this event the following way: “Soviet attempts to use the Greek Orthodox Church as a medium for persuasion and propaganda have undoubtedly received a setback with the election of Athenagoras.”

Athenagoras was received by President Truman who offered the presidential airplane for the Patriarch-elect to fly to Istanbul. 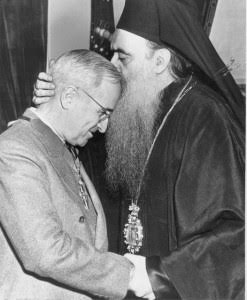 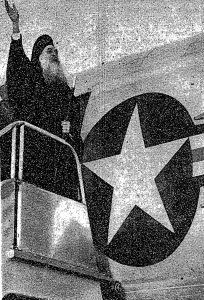 Within the first years of his patriarchate, Athenagoras is described in the Department of State archives as a partner in the war against communism willing and eager to collaborate with the American government. Consul General LeVerne Baldwin wrote, “He [Athenagoras] stressed his Americanism, belief in the Good Neighbor policy, in democratic methods, and in the courage and frankness of America, which he had endeavored to carry out in his policies as Patriarch.”

And the Patriarch proved these words with his deeds. Consul General Frederick Merrill noted that Athenagoras intended to diminish the Soviet influence over the Patriarchate of Alexandria by overthrowing Patriarch Chrystopher.

Being deeply concerned with the issues of Orthodoxy in the Middle East, His All-Holiness discussed them with Consul General Merrill in spring 1951. In a memorandum of April 4, 1951, Athenagoras was said to be much more optimistic about his various plans to draw the Orthodox Churches in the Near Eastern area closer to the Phanar in Istanbul, and America. Besides, he was eager to have Mount Athos placed under the “cultural benediction” of the Byzantine Institute in Washington to attract financial support to the Monastery and to throw open its archives, library, etc. to the Byzantine Institute and other American scholars.

The cooperation with the CIA also went on. Thus, as mentioned in a 1951 report, Patriarch Athenagoras was assuring the Americans that the Patriarch of Antioch will not “stray from the fold.”

In conclusion, it should be said that Patriarch Athenagoras was without any doubt an outstanding figure in the history of the Orthodox Church. His merits to the faithful mustn’t be underestimated. As many of those living in the past century, the Patriarch viewed the Cold War as a war between Good and Evil. “And the United States was, in the eyes of Patriarch Athenagoras the obvious agent of all that was good, against the existential threat of Soviet Communism,” writes Namee.

However, a question arouses: should such influential religious leaders as the Ecumenical Patriarchate be so deeply involved in politics collaborating with intelligence agencies and the government of this or that state?

And what does Patriarch Bartholomew, who is to visit the US this year, think about it?

The piece is based on the unclassified CIA documents studied by historian Matthew Namee and described at the Orthodox History.

Interesting piece. I need to learn more about CIA infiltration into the religious hierarchies. I have a pretty big gap in my knowledge base there. Thanks for posting this.