The Duran’s Alex Christoforou and Editor-in-Chief Alexander Mercouris discuss the German elections in the eastern state of Thuringia, where voters delivered big gains to the to the left Die Linke party and the right AfD party, while vanquishing Merkel’s once dominant CDU party to third place.

The central eastern German state of Thuringia is only home to about 2 million people in a country of 83 million.

But shocking results from the state’s regional election last night solidify a roiling trend of political polarization in Germany that foreshadows coming instability in both Berlin and Brussels.

What happened in Thuringia?

Thuringia is the last of Germany’s formerly communist eastern states to take to the polls this year. Since 2014, State Premier Bodo Ramelow of the socialist Left Party has led a coalition government with the center-left Social Democrats (SPD) and the environmentalist Greens.

In September, voters in the states of Saxony, Germany’s high-tech hub, and Brandenburg, known for lignite mining and agriculture, sharply rebuked parties straddling the center of the political spectrum. Both Chancellor Angela Merkel’s Christian Democrats (CDU) and the SPD, its junior coalition partner in Berlin, bled votes to parties flanking them on the ideological left and right. This in two states where those parties had comfortably governed since German reunification in 1990.

The same phenomenon occurred in Thuringia, just more dramatically. For the first time, the socialist Left Party emerged as the strongest party in a German election, capturing 31% of the vote.

The far-right Alternative for Germany (AfD) led by Björn Höcke — whose local political faction is being investigated for extremism — doubled its vote share to place second with 23%. The CDU placed third with 22%, followed by the SPD with 8%. The environmentalist Greens and the liberal Free Democrats (FDP) both finished with about 5% of the vote, the minimum needed to reenter the regional parliament.

Mathematically and politically, those results signal a difficult process for Ramelow to form a majority government. The Left Party, together with the SPD and the Greens, no longer have the numbers to cobble together a majority.

And with the CDU categorically ruling out a partnership with both the Left and the AfD, the most likely option is that Ramelow will lead a minority government — which would also be unprecedented in Germany. 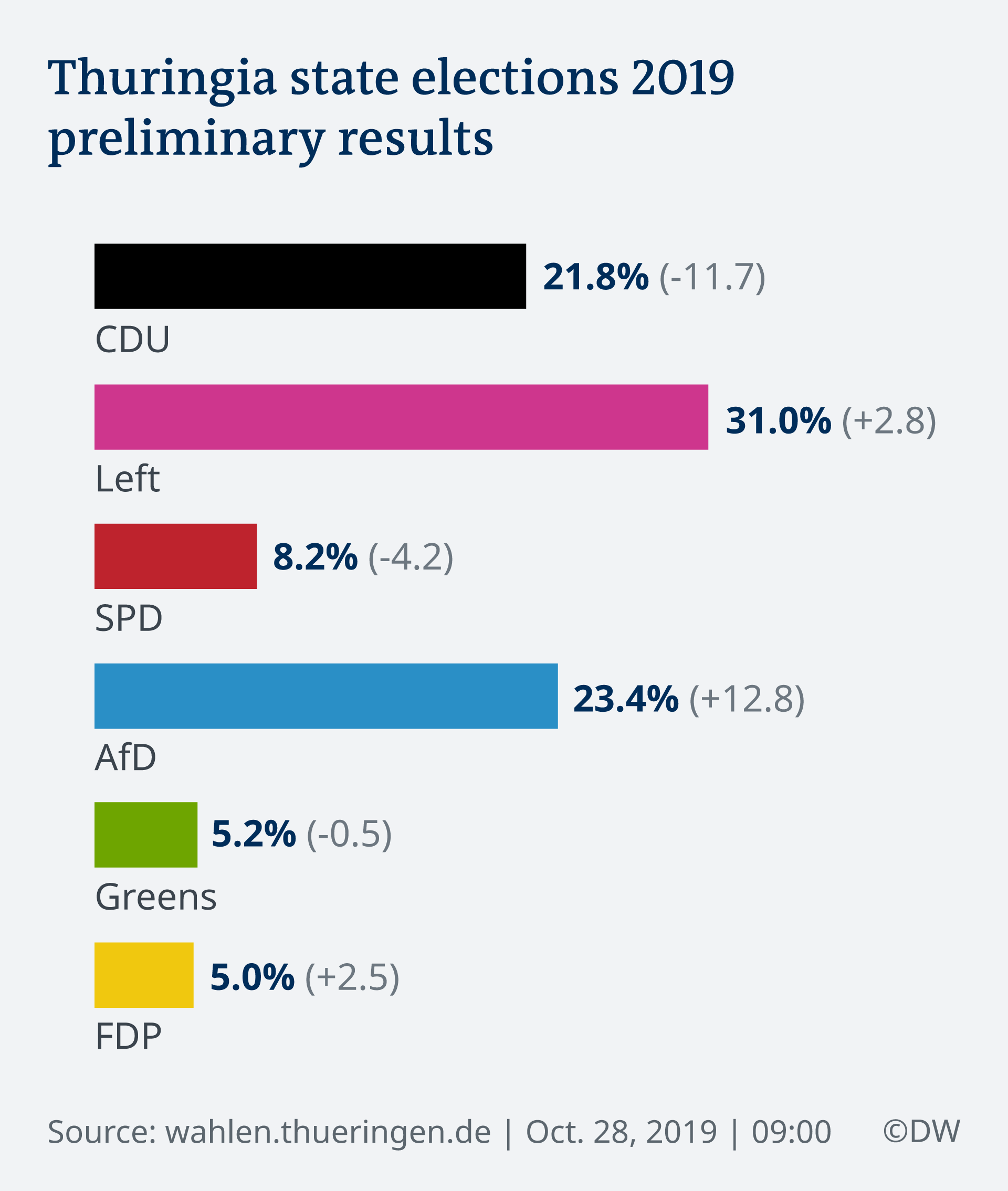 What does this mean for Berlin?

For Berlin, the results out of Thuringia bring a startling picture into clearer focus: Gone are the days of stable centrist governments.

For the first time in German postwar history, the four political parties representing the political center failed to resonate with a majority of voters. That’s largely thanks to Ramelow’s popularity in Thuringia, according to polling data.

But Chancellor Merkel’s Grand Coalition in Berlin also plays an outsized role: Both coalition partners have sunk so low in national polls that they would likely no longer command a governing coalition in the event of new elections.

Unpopularity aside, the CDU-SPD coalition in Berlin is surprisingly efficient. According to a recent analysis by the Bertelsmann Foundation, Germany’s current government has kept two-thirds of its legislative promises during its first 18 months in office.

But voters largely don’t see that, according to the study. And waning public trust is only compounded by major changes facing both parties: Chancellor Merkel has announced her retirement in 2021, and the SPD is in the midst of a nationwide search for its next leaders.

That puts Chancellor Merkel’s coalition under even more pressure after Thuringia to game out clearer political platforms and plan for more unorthodox partnerships with fringe parties in order to stay in power.

“The parties of the Grand Coalition in Berlin are even more damned than ever before to put aside their differences and work effectively,” said Träger.

What does this mean for Europe?

As the continent’s largest, wealthiest and most politically stable nation, Germany has come to be seen as Europe’s de facto leader.

That’s especially been the case during Chancellor Angela Merkel’s almost 15-year tenure, during which time she has presided over some of the bloc’s most dramatic crises — from Brexit and the eurozone financial crash, to increased immigration to Europe.

But Europe’s chief stateswoman is on her way out and delegating foreign policy tasks to her ministers, who in the last week alone have stood accused of unilateral decision making and bringing domestic political squabbles to the world stage.

Such instability in Germany, however, poses larger problems for European partners. Namely that they will have to factor in new confounding German variables when pressing new challenges arise.

“If German coalitions on the national level are too preoccupied battling for majorities … that takes away from their strength, manpower and public image to European partners,” said Träger.

I think it is dangerous to just ignore a political party just because of difference of opinion, difference of thought, etc. These are all legal parties and we ignore some of them at our own peril. We do need fresh ideas, younger people in politics, new ways of trying to solve old problems. “Business (political parties) as usual” just doesn’t hack it any longer. It is no wonder that the younger folks are in an uproar. Enough of “same, old same”.