With the apprentice shooting death of former Lebanese Prime Minister Saad Hariri’s friend and business associate Prince Abdul Aziz bin Fahd, many have circulated rumours, some of them from seemingly reliable sources, that Hariri is under arrest and being kept prisoner in the Ritz Hotel in Riyadh along with Saudi princes and ministers who have been purged from powerful positions by Crown Prince Muhammad bin Salman.

Now however, Saudi state-run television Al Arabiya has reported that Hariri has travelled to the United Arab Emirates, ostensibly of his own volition. 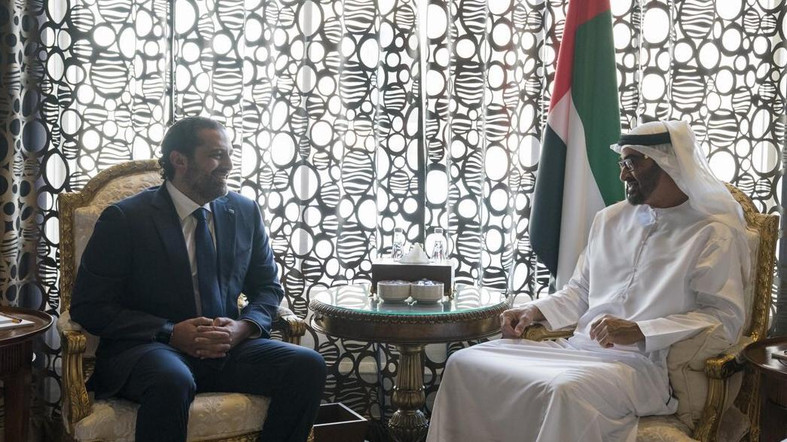 The report further states that after the brief meeting, Hariri flew back to Riyadh.

It is still not entirely clear if Hariri’s movements are merely demands made by the Saudi regime. Saudi Arabia has taken the extraordinary step in stating that Lebanon has “declared war” on Saudi Arabia, blaming Hezbollah and by extrapolation Lebanon for Houthi rebel attacks on Saudi. The brazen and bizarre statement from Saudi is made all the more absurd when one considers the fact that neither Hezbollah nor Iran are capable of supplying Yemen’s Houthis with weapons due to the Saudi naval blockade of the embattled and impoverished country. In this chaos, Hariri’s position is appearing increasingly untenable as well as uncertain.

Meanwhile in Beirut,  Lebanese President Michel Aoun of the primarily Christian Free Patriotic Movement has met with former Lebanese Prime Minister Fouad Siniora of Hariri’s Sunni Future Movement. Both men have called upon Hariri to return to Lebanon, although it is not clear if he is able to do so, due to Saudi pressure.

There remains a possibility that the current Lebanese coalition government could remain in power if Siniora agrees to once again become Prime Minister in an agreement to preserve national unity in the wake of Hariri’s departure.

The situation in Lebanon remains tense, however, Hezbollah’s leader Sayyid Hassan Nasrallah has made a call for calm and unity, emphasising the following issues as The Duran recently reported:

“Nasrallah’s speech urged calm among all Lebanese, including members of Hariri’s Future Movement and stated that a return to conflict and sectarian violence is no way to respond to the resignation of the Prime Minister. Nasrallah also encouraged Lebanese to avoid riots and street protests as this would only serve to create a divisive atmosphere.

From any objective point of view, Nasrallah’s calming speech calling for the unity of Lebanon behind the principles of peace and constitutionality, was far more statesmanlike than the hurried rambling resignation speech made by Hariri in Saudi Arabia, live on Saudi state-run Al Arabiya TV.

Sayyid Hassan Nasrallah began has remarks by stating that no one knows what happened to the former Lebanese Prime Minister during his visit to Saudi, nor why he was not able or not allowed to come to Lebanon and deliver a proper resignation speech there.

He then remarked that during his resignation speech, Hariri used terminology that was not Lebanese but Saudi, thereby indicating that the author of the speech was likely a Saudi political writer rather than Hariri or anyone from Lebanon. Furthermore, he stated that the resignation was a Saudi decision, dictated by Saudi leaders and that it was not Hariri’s intent nor his decision to resign.

The Hezbollah leader then stated that “we did not want this resignation to happen. Generally speaking things were going okey”. He spoke of an attitude in the Lebanese coalition government in which Hezbollah has two cabinet ministers, as one that is generally congenial and effective.

Nasrallah then said that it is necessary to find out why the Saudis insisted on Hariri’s resignation. He proffered three theories

1. Hariri may have had good relations, including financial dealings and/or personal friendships with some of the Saudis who were arrested yesterday in a great purge of the Saudi elite, orchestrated by Crown Prince Muhammad Bin Salman.

This theory is in line with one which I explored, which hypothesises that Hariri’s forced resignation was more to do with Saudi’s internal politics than with Lebanon itself.

Nasrallah also stated that it is important not to over emphasise the Israeli connection to the resignation because ultimately Israel answers not to Riyadh but to Washington. He stated that Israel is always contemplating further attacks, but that Israel is only prepared to commit itself to wars that are short and inexpensive. Israel, Nasrallah said, is well aware that any attack on Lebanon would be long, costly and ultimately fruitless and that because of this, many in Israel are thinking twice.

This again, speaks to the fact that the Hariri resignation has more to do with an atmospherics of hopelessness on the part of Saudi and Israel than one of confidence, as both states realise that their favoured Takfiri forces in Syria have lost and that Hezbollah, Syria and Iran are on the winning side.

2. Nasrallah suggested another theory for Saudi’s forcing of Hariri’s hand, stating that perhaps they were disappointed that things were generally calm in Lebanon and that Hariri was being cooperative with his coalition partners, including Hezbollah.

Because of this, perhaps Saudi wanted a more loyal, more extreme puppet PM in Lebanon and effectively removed Hariri because they felt he was unsatisfactory.

3. Hezbollah’s leader suggested that as many are saying, Saudi plans to attack Lebanon but Nasrallah rhetorically asked, how? With Saudi’s proxies on the verge of total defeat in Syria, it would be difficult for Saudi to directly attack Lebanon unless via the sea or through occupied Palestine. Nasrallah reached the conclusion that both of these options are deeply unrealistic.

Nasrallah continued, asking to verify the whereabouts of Hariri who has not been seen in public since his televised resignation from the Saudi capital.

He then said that all Lebanese must abstain from political escalation and that peace and security must remain the priority. Because proper constitutional mechanisms are in place, there is no cause for concern and that Lebanese should allow President Michel Aoun to execute his duties in peace until a new Prime Minister can be appointed.

Nasrallah stated that the Lebanese authorities have assured the world that there are no credible threats against the former Prime Minister’s life and that rumours to the contrary are all part of a deception campaign from Saudi Arabia”.

For Lebanon, the key is to resist the internal crisis that the Saudi leadership is clear provoking.

Nasrullah is smarter than many in the west as he seems to understand that Israel is a client of the US. Propgandists and BS artists often try to say that Israel controlls the US. But that’s like saying a flea controls the dog because it can make the dog scratch itself at times.