The Duran’s Alex Christoforou and Editor-in-Chief Alexander Mercouris discuss a recent RAND Corporation research paper which delivers a detailed road map as to how the United States can destabilize Russia, and systematically destroy the Russian Federation by employing economic, social-ideological, geopolitical and military tactics.

“Overextending and Unbalancing Russia, Assessing the Impact of Cost-Imposing Options.”
Via RAND Corporation…

This brief summarizes a report that comprehensively examines nonviolent, cost-imposing options that the United States and its allies could pursue across economic, political, and military areas to stress—overextend and unbalance—Russia’s economy and armed forces and the regime’s political standing at home and abroad. Some of the options examined are clearly more promising than others, but any would need to be evaluated in terms of the overall U.S. strategy for dealing with Russia, which neither the report nor this brief has attempted to do.

Today’s Russia suffers from many vulnerabilities—oil and gas prices well below peak that have caused a drop in living standards, economic sanctions that have furthered that decline, an aging and soon-to-be-declining population, and increasing authoritarianism under Vladimir Putin’s now-continued rule. Such vulnerabilities are coupled with deep-seated (if exaggerated) anxieties about the possibility of Western-inspired regime change, loss of great power status, and even military attack.

Despite these vulnerabilities and anxieties, Russia remains a powerful country that still manages to be a U.S. peer competitor in a few key domains. Recognizing that some level of competition with Russia is inevitable, RAND researchers conducted a qualitative assessment of “cost-imposing options” that could unbalance and overextend Russia. Such cost-imposing options could place new burdens on Russia, ideally heavier burdens than would be imposed on the United States for pursuing those options.

The work builds on the concept of long-term strategic competition developed during the Cold War, some of which originated at RAND. A seminal 1972 RAND report posited that the United States needed to shift its strategic thinking away from trying to stay ahead of the Soviet Union in all dimensions and toward trying to control the competition and channel it into areas of U.S. advantage. If this shift could be made successfully, the report concluded, the United States could prompt the Soviet Union to shift its limited resources into areas that posed less of a threat.

The new report applies this concept to today’s Russia. A team of RAND experts developed economic, geopolitical, ideological, informational, and military options and qualitatively assessed them in terms of their likelihood of success in extending Russia, their benefits, and their risks and costs.

The most-promising options to “extend Russia” are those that directly address its vulnerabilities, anxieties, and strengths, exploiting areas of weakness while undermining Russia’s current advantages. In that regard, Russia’s greatest vulnerability, in any competition with the United States, is its economy, which is comparatively small and highly dependent on energy exports. Russian leadership’s greatest anxiety stems from the stability and durability of the regime, and Russia’s greatest strengths are in the military and info-war realms. The table below draws from the earlier tables to identify the most-promising options.

Most of the options discussed, including those listed here, are in some sense escalatory, and most would likely prompt some Russian counterescalation. Thus, besides the specific risks associated with each option, there is additional risk attached to a generally intensified competition with a nuclear-armed adversary to consider. This means that every option must be deliberately planned and carefully calibrated to achieve the desired effect. Finally, although Russia will bear the cost of this increased competition less easily than the United States will, both sides will have to divert national resources from other purposes. Extending Russia for its own sake is not a sufficient basis in most cases to consider the options discussed here. Rather, the options must be considered in the broader context of national policy based on defense, deterrence, and—where U.S. and Russian interests align—cooperation. 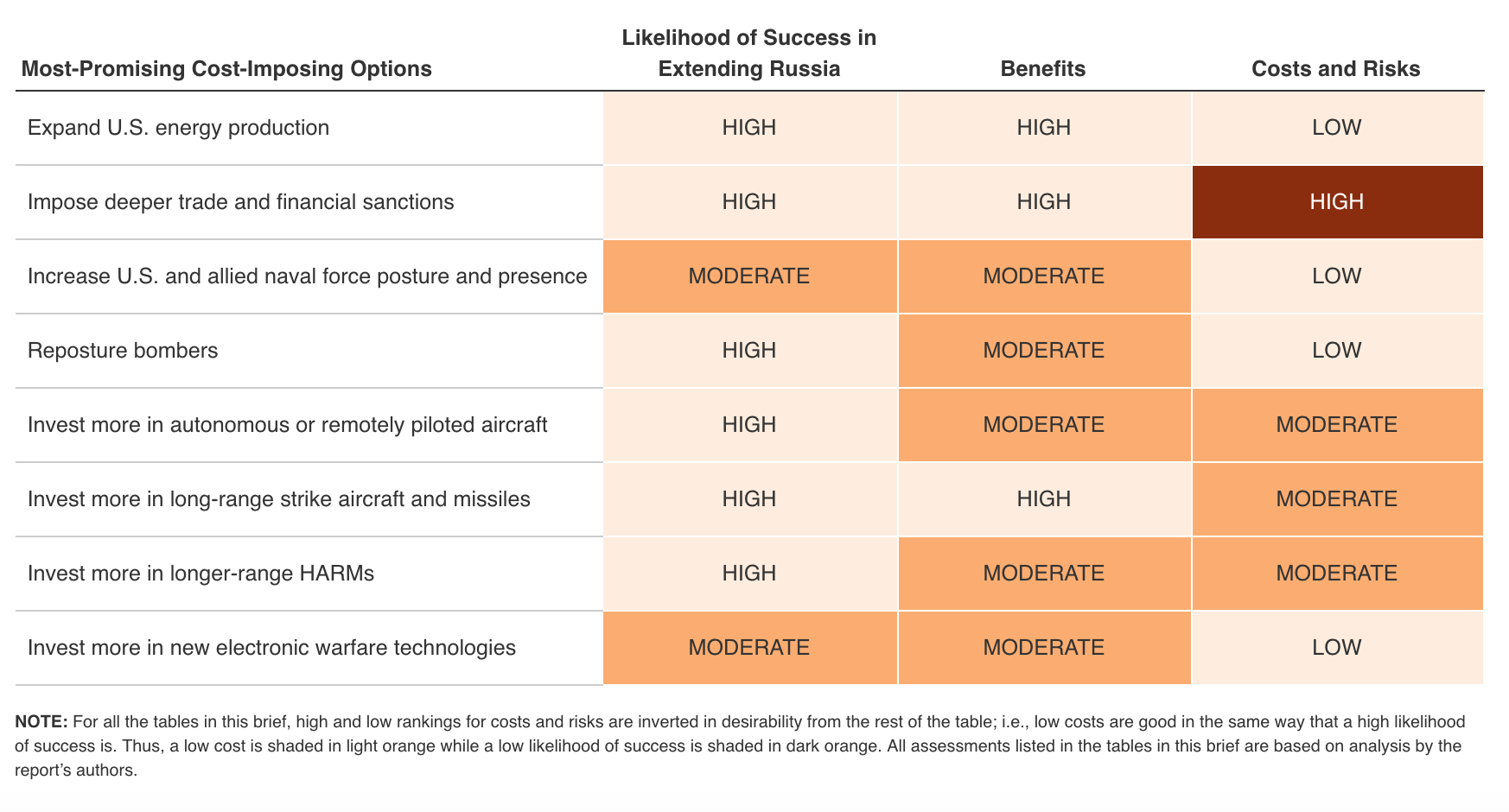 Listening to your reporting is such a fresh take on the news. Thank you! BTW, my Magic Mug is to be here soon. I’m looking forward to becoming brilliant, too! haha

The problem with US Thinktankers like Rand is that they don’t know how to think. Alex and Alexander and the Russians can think far, far better than Rand.

Yes. The hate of psychopaths does not rise to the level of ‘thought’.

Another piece of exceptional stupidity from “rand”.

Rand can go pound sand. They’re so darn good at it.

I always get a kick out of reading these neocon fantasies.

It appalls me that with all the hype by the Anglo-Zionist crazies against ‘hate-thought’ and ‘hate speech’, these crazies of Rand and the Atlantic council remain unscathed.

Building air defence weaponry the likes the us shitter hole WISHES it had. Building hypersonic weapons the shitterhole has NO defence against. Building radar installations that can track a mosquito coming from across the Atlantic and from the arselicker vassal nato countries that will be incinerated the minute missiles are fired at Russian territory.
You’ve been hiding under a bridge for some time, haven’t you, troll.

You must be American as your comment is so ill informed.

I usually agree with you guys, but in this case I think you are off the mark in your main conclusion. Your conclusion that it is cheaper to build defensive systems against a strategic nuclear attack, than it is to build the offensive systems, is exactly wrong. That is why Reagan’s Star Wars, and other defensive systems were not built. Experts could always show that it was much more expensive to intercept a ballistic warhead, than it is to build the warhead and delivery system. No matter how good your ‘defense’, your enemy could always build enough missiles to overwhelm… Read more »

The best solution for the SCO is a preemptive strike on the Fourth Reich centered in Washington, London and Israel.

I believe the US will implode before Russia.

I usually agree with you guys, but in this case I think you are off the mark in your main conclusion. Your conclusion that it is cheaper to build defensive systems against a strategic nuclear attack, than it is to build the offensive systems, is exactly wrong. That is why Reagan’s Star Wars, and other defensive systems were not built. Experts could always show that it was much more expensive to intercept a ballistic warhead, than it is to build the warhead and delivery system. No matter how good your ‘defense’, your enemy could always build enough missiles to overwhelm… Read more »

I don’t see a download button on the audio version. Is there one?

Why doesn’t someone bomb the Rand Corporation? They are psychopathic warmongers. Do we humans no longer have a right of self-defense against monsters? Does the right of preemptive strike only apply to people whom the Rand Corporation and Atlantic Council and CIAIPAC run Washington approves of?
Wake up people and do something before we all die in our sleep.

Aynus RAND, not the real name of the Jewish banker’s daughter, has a lot to answer for.