Come and see the beauty of Crimea by the sea. In order to truly understand Crimea, you have to visit this beautiful, magical place. Do so, and your perspective on it, and the world may completely change. You may also fall in love.

If more policymakers would just visit this land which they issue sanctions over, and truly understand the wonder and history Crimea offers the world, they make change their perspective. That is what happened when the German delegation visited. 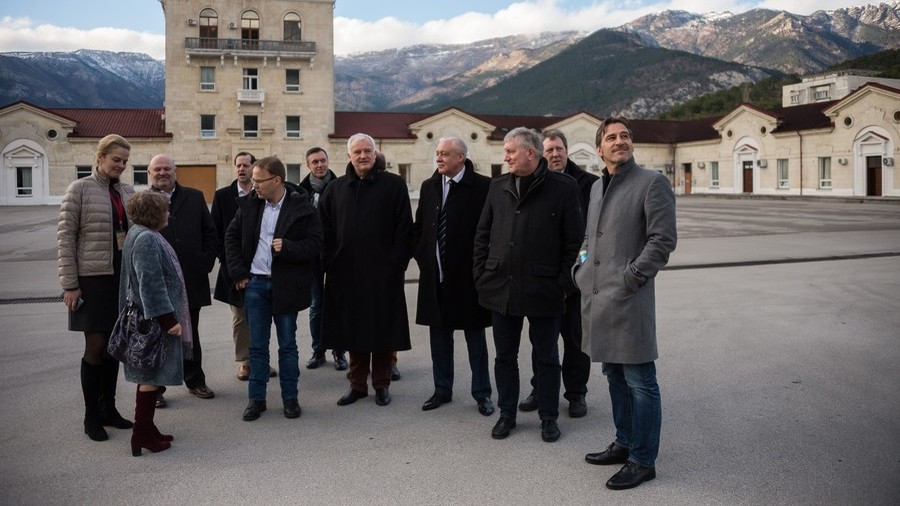 These were the words of Helmut Seifen, a German MP from North Rhine-Westphalia after his Crimea visit:

I think that the sanctions introduced after Crimea held its referendum and was reunited with Russia are counterproductive. This is a way of escalation.…Some political forces must come to power in Ukraine that would accept the will of the Crimean people. This would bring peace between the nations and ordinary people could resume their travels from Ukraine to Crimea and back. All ties would be restored,” added the German politician.

This is something alternative media has been covering for ages now, and something that top US professors have already explained – Crimea is Russia. Sanctioning Russian lands for joining Russia is insanity. The sooner people understand that, the sooner they stop risking a dangerous conflict with catastrophic consequences for the whole world.

The fact that Crimea is Russia is not a matter of opinion, it is a simple historical fact, and no one upon truly studying the history and culture in depth would disagree, unless they are a radical anti-Russian nationalist. In order to truly appreciate the German MP’s revelation, we must take a walk through the annuals of Crimean history.

The Glorious and Tragic History of Crimea – the same could be said of many Slavic lands:

Crimea is one of the most important parts of Rus’, yet it began it’s story with the Greeks. Indeed, would you believe the site of the Baptism of the first Rus Prince was NOT a part of Kievan Rus’? How is this possible? Let’s find out…

Kievan Rus’ was the first Russian state, which all scholars agree was the ancestor of Russia, Ukraine, and Belarus.

If one looks carefully, they will notice the Crimean peninsula was not a part of Kievan Rus, but was, in fact, a Greek colony – a territory of the Eastern Roman Empire. There are 9th-century Greek monasteries on the peninsula to prove it.

Bear in mind, this is not the time or place for a detailed history of Crimea, of which pages could be written, but the simply account goes that Crimea, the site of the Baptism of Saint Vladimir of Kiev, in preparation for his marriage to a Byzantine Princess, would eventually fall to Mongol hordes like the rest of Rus’. This means Crimea is not part of what Ukrainians misleadingly refer to as “Ancient Ukraine”, as they call Kievan Rus. This is misleading, as while Ukrainian people have an equal claim to the land with Russians and Belarussians, there was no such term as Ukraine in the period, and the state was called Rus’, from which Russia takes her name, and the three peoples were indistinguishable in that time.

After the Mongol Empire fractures into the Golden Horde, Crimea eventually is ruled by a splinter group called the Crimean Khanate, who were vassals of the Ottoman empire. The khanate was the source of endless suffering for Rus’ people, often abducting slaves from Ruthenia (modern day Ukraine), and Polish-Lithuanian territories, and selling them to the Ottoman Turks. This was how Suliman the Magnificent received his wife, Roxalana, a Ukrainian girl abducted by the Crimean Tatars. The Cossacks of Zaporozhia would be forced to ally with the Tatars against the Poles, in the interest of national liberation, but the moment Hetman Bogdan Khmelnitsky was able to negotiate the reunification of Ukraine with Russia, his Cossacks quickly ignored the Tatars, whom they only saw as an ally of convenience, and never forgot their cruelty.

Eventually, after freeing the nation from Polish rule with Russia’s help, the Cossacks would in turn help Russia settle the “Wild Fields” of Southern Ukraine and Russia, including the Kuban where they still dwell today. In this process, it led to the settlement of New Russia (Novorossia).

It was called “New” as the land had little to do with Ancient Rus’, and all the great cities of Odessa, Nikolayev, Kherson, etc. were built in the late 18th century by the modern Russian empire, as opposed to being cities built during the shared period of Rus’. The map below clearly show how Cossacks helped Russia settle these new lands, and reveal the historical evolution of the land now called Ukraine.

These lands include Crimea, and oh how history repeats itself, because the conflict in Novorossia is, of course, still raging today. It is in understanding this history, we realize why sanctions against Russia over Crimea is pointless, and Crimea is Russia. The fact that all these lands were settled in the early modern period by the Russian Empire connects them even more with Russia, than other ancient Russian cities like Lviv, which were founded in the common medieval period, and existed seperate from Russia for several centuries. Crimea simply would not be settled by Slavs in general, were it not for the Russian Empire. In 1954, the peninsula was unceremoniously gifted to Ukraine by Nikita Khrushchev, the Soviet leader of Ukrainian descent.

This is where partial knowledge of history fails some people, as, without the whole story, some may concede and admit that Crimea is Russia, because it was given in 1954, but insist that Donbas and Kiev are distinctively Ukrainian. That is still not quite accurate. The issue here is that all of Ukraine was once Russia a mere less than 50 years prior. The land was only divided as the result of the Bolshevik revolution and WW1, and then artificially constructed, but by then, the seeds of nationalism took root. The difference between Ukraine and Russia is like East and West Germany, when they were two separate states. If the people wish to remain in separate states, this is a political opinion, and everyone has the right to their own opinion, but no one can deny the historical unity between them.

It was this unity that German lawmakers noticed when they went to Crimea. We have already covered the German expedition to Crimea in detail here:

According to RT, Kiev has already initiated legal proceedings against the German lawmakers, after threatening them that their trip could have lamentable consequences, as we noted in the article above.

It is perhaps the words of the Deputy Speaker of Crimean legislative assembly, Yuri Gempel, which perfectly sum everything up:

“Europe is waking up slowly and starting to understand that Crimea has returned to Russia forever.”

Any discussion of Crimea or Ukraine must be made with the understanding that this is a permanent reunion, just as the reunification of Ukraine and Russia in 1654 was meant to be, until it was sabotaged by foreign powers who manipulated petty nationalism amongst the people, and used the Bolsheviks as a tool to divide old Russia.

There is a monument to that reunion here, in our photo essay about the haunting beauty of Chernobyl which we highly recommend.

It must be understood that Crimeans did not abandon any part of themselves when they returned. Those who wish to be Ukrainian are no less Ukrainian, as Ukrainian culture is as much an inseparable part of Russia as Gogol, and just as much as Russian culture and history is inseparable from Ukraine. No matter how far across the vast steppes of time Ukrainians roam – Russia is their home.