The Duran’s Alex Christoforou and Editor-in-Chief Alexander Mercouris take a quick look at China’s economic slowdown and how this will affect the world economy in 2019.

China’s surging tech industry is also undergoing rough patches as the Huawei conflict with Canada (and by extension the United States) reached fever pitch levels with executive espionage intrigue in Poland. In retaliation, China blasted Canadian PM Justin Trudeau’s and his government as being White Supremacists by the Chinese ambassador to Ottawa.

As more signs of stress in the world’s second-largest economy emerged during the latter half of last year, factory orders and consumption indicators slumped and its housing bubble on the verge of bursting, China is expected to report later this month that its GDP expanded by 6.6% in 2018 – the weakest rate since 1990. 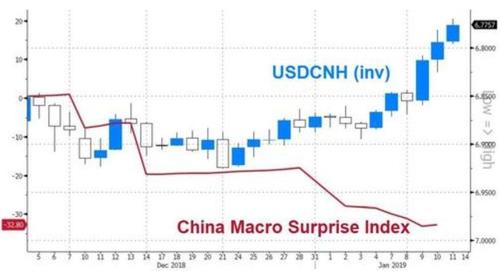 This is hugely problematic for the PBOC, which abandoned plans for a macroprudential deleveraging to slash taxes and boost bank lending last year to try and stabilize its economy. But in keeping with China’s legacy of economic goalseeking, in addition to redoubling its stimulus efforts in 2019, Beijing is reportedly planning to move the goal posts.

According to Reuters, China is planning to set a lower economic growth target of 6% to 6.5% in 2019, compared with last year’s target of “around” 6.5%, as Beijing braces for weaker domestic demand and more fallout from the US-China trade war.

The proposed target, to be unveiled at the annual parliamentary session in March, was endorsed by top leaders at the annual closed-door Central Economic Work Conference in mid-December, according to four sources with knowledge of the meeting’s outcome.

Data later this month is expected to show the Chinese economy grew around 6.6 percent in 2018 – the weakest since 1990. Analysts are forecasting a further loss of momentum this year before policy support steps begin to kick in.

As the world’s second-largest economy loses steam, China’s top leaders are closely watching employment levels as factories could be forced to shed workers amid a trade war with the United States, despite a more resilient services sector, policy insiders said.

Fortunately for the Communist Party, the country only needs to show 6.2% growth over the next two years to achieve its goal of doubling GDP in the decade to 2020. Achieving this would transform China into a “modestly prosperous” country.

No matter what happens, Reuters’ source said the Communist Party needs to show growth of “at least 6% this year” (and given China’s reputation for doctoring its data, we imagine this will be a self-fulfilling prophecy). Still, adopting such a wide range for its GDP growth target would give the Party “room to maneuver.”

Though China is revising its growth target thanks to signs of slowing growth, the same cannot be said for its inflation target, despite signs of weakening price pressures due to the weakening yuan (data this week showed China’s CPI slowed to 1.9%).

The government plans to maintain a 3 percent consumer inflation target for 2019despite a recent softening in price rises, leaving some space for the government to stimulate weaker consumption.

However, it’s important to keep in mind that China likely inflates its GDP figures, though one academic who recently suggested that growth in 2018 might have been below 2% was subject to an aggressive government censure.

That should tell you all you really need to know about growth in China.

Meanwhile Zerohedge reports that in the op-ed, published by Ottawa’s the Hill Times newspaper, ambassador Lu Shaye lashed out at Canadian “elites [who] completely dismissed China’s law and presumptuously urged China to immediately release their citizens.” He also accused Canada of enforcing a double standard by detaining Huawei CFO Meng Wanzhou despite her not having committed a violation of Canadian law. Canadians have shown intense concern over the wellbeing of their citizens, but Lu accused them of behaving thoughtlessly and cruelly toward Meng.

However, on the prior groundless detention of Chinese citizen Meng Wanzhou by Canada at the behest of the United States, these same people made utterly different comments. They insisted that Canada’s detention of a Chinese citizen who was transferring planes at the airport was “acting in accordance with law,” though Meng has not been charged with any violation of Canadian law.

It’s understandable that these Canadians are concerned about their own citizens. But have they shown any concern or sympathy for Meng after she was illegally detained and deprived of freedom?

Without violating any Canadian law, Meng was arrested last month and put in handcuffs just as she was changing planes at the Vancouver International Airport. It seems that, to some people, only Canadian citizens shall be treated in a humanitarian manner and their freedom deemed valuable, while Chinese people do not deserve that.

Lu pointed out the hypocrisy in Canadian officials’ insistence that Meng’s detention was just because Canada is a country that respects the “rule of law,” implying that China isn’t.

When China called on the Canadian side to release Meng and ensure her legal and legitimate rights and interests, those elites claimed in the media that Canada is a country of rule of law and has an independent judiciary, and therefore it must comply with the judicial proceeding. However, in the case of detention of Canadian citizens in China who violated China’s law, those elites completely dismissed China’s law and presumptuously urged China to immediately release their citizens. It seems that, to those people, the laws of Canada or other Western countries are laws and must be observed, while China’s laws are not and shouldn’t be respected.

In a repudiation of the US’s accusations that Huawei has helped the Chinese government spy on western rivals, Lu pointed out that while Canada has objected to Huawei, it hasn’t shown a similar level of concern about cyberespionage efforts carried out by the US – including those that were exposed in the sensitive NSA documents stolen by former contractor Edward Snowden.

Some people in Canada, without any evidence, have been hyping the idea that Huawei is controlled by the Chinese government and poses security threats to Canada and other Western countries, and that Chinese law requires China’s enterprises to collaborate with the government in espionage activities. However, these same people have conveniently ignored the PRISM Program, Equation Group, and Echelon—global spying networks operated by some countries that have been engaging in large-scale and organized cyber stealing, and spying and surveillance activities on foreign governments, enterprises, and individuals. These people also took a laissez-faire attitude toward a country that infringes on its citizens’ privacy rights through the Patriot Act. They shouted for a ban by the Five Eyes alliance countries (Australia, Canada, New Zealand, the United Kingdom, and the United States) on the use of Huawei equipment by these countries’ own enterprises, which is literally a government-controlled action.

Though Canada considers itself a bastion of liberal values, Lu claimed that double standards like this one stem from the same western “white supremacy” that has made “the rule of law” nothing more than a tool for political ends – despite the seemingly endless stream of virtue-signaling.

The reason why some people are used to arrogantly adopting double standards is due to Western egotism and white supremacy. In such a context, the rule of law is nothing but a tool for their political ends and a fig leaf for their practising hegemony in the international arena. What they have been doing is not showing respect for the rule of law, but mocking and trampling the rule of law.

Meanwhile, China has clearly indicated that it intends to prosecute Michael Kovrig and Michael Spavor for threatening national security – though they’ve offered the caveat that both cases are still “under investigation”, leaving an opening to release the two men, presumably if Canada decides to drop its prosecution of Meng. Both men have been denied access to legal representation.

If Canada insists on causing trouble with China , as a Canadian ,I have to ask just who are they planning to sell the natural gas to with the proposed pipeline that they are having so much trouble rushing through to the West coast . Hello Alberta ,wakie,wakie .

The fellows at World Alternative Media (WAM) did a piece on the Chinese economy a couple of months ago. Seems as though this has been going on for a while and The Donald has a few of these things in mind as he knows a little bit about real estate and vacancy issues as they apply to economics. The issue seems to be effecting “make-work” redundancy as a means to put the folks to work while really having no market for their production. If a trade war begins, the Chinese might find themselves with even more production with nowhere to… Read more »

The Chinese have the whole free world to sell their goods to: Russia, Iran, South East Asia, Africa, Latin America …
And they DO SELL a lot there!