in spite of concerted attempts by the mainstream media and especially the White House to ignore it, the massive unrest, rebellion, in China, can no longer be ignored. Clearly the Chinese people have now had more than enough of these insane Covid lockdowns which are no longer about Covid, if they ever were about Covid.

The behaviour of the police has been typically heavy-handed; decked out in full hazmat suits they have been wading into people freely, but there are signs the regime is if not cracking then prepared to back down.

The crowds are also getting bolder. Public calls for Xi Jinping to resign would have been inconceivable even a few weeks ago. So what is happening? Those of us who were around in 1989 will remember Tiananmen Square, in particular that iconic image of a solitary student facing down the might of the Chinese army.

In spite of the protests being crushed, there were signs that things were improving, and indeed they still are in purely economic terms. Successive Chinese Governments – albeit all of the same flavour – have done much to lift literally hundreds of millions of people out of poverty, but just as freedom without livelihood means little, so does being a fattened slave. China’s digital currency, mass surveillance and social credit system means anyone who steps out of line will be crushed, and that means any non-compliance at all, with or without a political dimension.

If the protests have surprised the world, the reaction of especially the White House has been not so much surprising as disgusting, but as Dan Bongino and others have pointed out, this is because the people now controlling America are intent not on freeing the Chinese people but on enslaving their own with the same tactics. A digital dollar is already being developed, and mass surveillance is a matter of record. Anyone who owns a mobile phone can and will be tracked. So what is to be done?

As far as China is concerned, we must remember that the Chinese Government and the Chinese people are two entirely different entities. The Soviet Union collapsed because Mikhail Gorbachev and others realised socialism was unworkable and were prepared to bring about radical change. There is no Chinese equivalent of Gorbachev, and China  is being propped up by the West. We must disengage as far as possible and support those who oppose the regime. China is a one-party state. There are other, very small political parties, but frankly they are a joke.

The reaction of this Chinese official to a reasonable question is telling. Regime change is called for, but in Washington as well as Beijing.

The quality of writing on Theduran.com has collapsed through the floorboards recently, and it is increasingly difficult to sustain the pretence of journalistic integrity and professional independence

Maybe you should go over to the “online newspaper of the international Trotskyist movement”, The World Socialist Web Site, if you want to read favourable reports of tyrannical communist regimes. 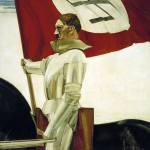