In an unusual move, the Chinese delegation has come clean to the domestic press about Beijing’s remaining trade-deal related demands, exposing steep divides that could make it a final deal impossible for Trump, who has repeatedly said he will only accept a “great” deal.

That without the complete removal of all trade-war related tariffs, Beijing will not remorse a deal.

The other two demands were related to American commitments to buy Chinese goods, something that could also pose a problem.

In a wide-ranging interview with Chinese media after talks in Washington ended Friday, Vice Premier Liu He said that in order to reach an agreement the U.S. must remove all extra tariffs, set targets for Chinese purchases of goods in line with real demand and ensure that the text of the deal is “balanced” to ensure the “dignity” of both nations.

Underscoring the parlous nature of the negotiation, Representative Robert Lighthizer said on Friday that the administration is planning to release details of its process for imposing tariffs on $300 billion in Chinese imports. The move will likely have the desired effect: Communicating that Trump doesn’t plan to yield on what’s left of his core demands.

For those keeping track, here’s a timeline courtesy of Rabobank. 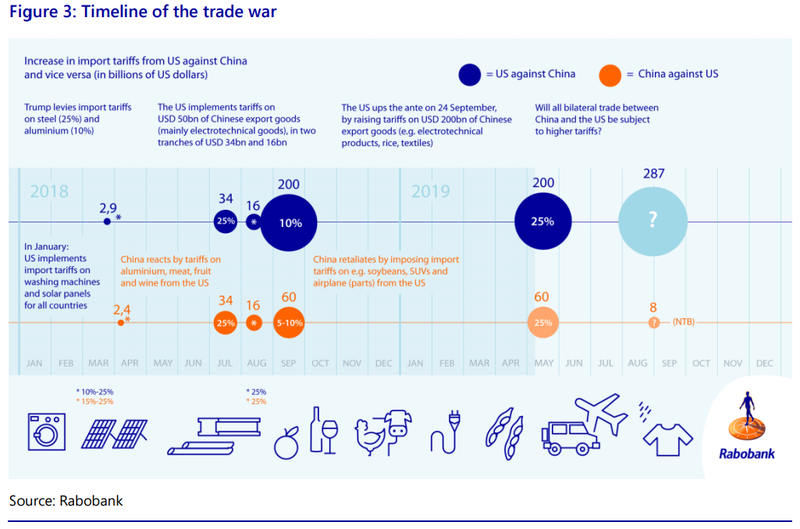 But as campaigning for the upcoming presidential vote ramps up, the administration will need to carefully consider the pressure on the American consumer that might become a factor if the price of all goods flowing into the US from China is forced higher due to the additional tariffs.

In his interview Liu said both sides agreed to keep talking despite what he called “some temporary resistance and distractions,’’ and to hold future meetings in Beijing. He dismissed the idea that talks had broken down. “It’s normal to have hiccups during the negotiations. It’s inevitable.”

Liu also struck a note of defiance. “For the interest of the people of China, the people of U.S. and the the people of the whole world, we will deal with this rationally,” the vice premier said.

“But China is not afraid, nor are the Chinese people,” adding that “China needs a cooperative agreement with equality and dignity.”

Ultimately, respecting national sovereignty was a major theme in the talks. but whether Trump is willing to make these concessions and risk looking weak before the man who is emperor of one-fifth of the world’s population.

The dump doesn’t understand that it isn’t China that pays the tariffs, it’s the us consumers who do. The Chinese exporters pay nothing, the importers on the us end have to pay the tariffs and then pass them on to the end consumer, mr and mrs joe seppo public.

The Chicago Gang
Reply to  BobValdez

Well, in theory I think, once the cost to consumers surpasses that which could be garnered by shifting production to other nations (Vietnam for one, there’s some irony for you), then Adam Smith’s guiding hand would set the global trade ship on an even keel…..EVENTUALLY.

Until then, enjoy the inflation, folks.

China has plenty of trade partners all around the world. Threatening China will not work.

Somebody better tell Trump that China’s holding most of the cards.

You can call me AL
Reply to  Straight flushed with cash.

I can see it now, strangely enough…

Trump – “But I have the two jokers, hahahah hehhehe ”

Xi – ” but jokers are not valid in this game”

Trump – “Bolton, Pence, get here now, you traitorous, war-mongering vermin”. <<<<<< please replace this with your own.

FlorianGeyer
Reply to  You can call me AL

I expect Bolton to declare that 120,000 US troops will be sent to Japan in order to prepare for an attack on Manchuria, Al.

Trump would doubtless say that a US invasion is ‘an amazingly powerful response to get China to change her behavior’.

Who could ever have imagined that in-name-only communist China would one day become the gatekeeper to American consumerism.

US is the biggest consumer of the chinese goods.

I’d really like to know what Ricardo’s Principle of Comparative Advantage would have to say about this trade war.

Can anyone sum it up in a few words? I’ve become intellectually lazy in this Alice in Wonderland geopolitical landscape of late.

The Chicago Gang
Reply to  Hmph

I think Alan Greenspam might dig into his bag of parlor tricks again and propose anew that “banks would never work against their own long-term interests”, and suggest a massive re-education program to teach bankers how to manufacture widgets.

It’s that nefarious Russian gas through Germany that plans to enslave Europe. It must be stopped so that Russian gas can proceed unfettered through Ukraine. Then they can call it Ukrainian gas and avoid Europe’s dependence on Russian gas. Simple as 2+2=4.

My head hurts from trying to get it around your post. I think I now qualify as having post-traumatic stress disorder.

Wait ’til you figure out that ‘reverse flow’ only means that Ukraine pulls its Russian gas from the pipe on route to the EU, then pays the EU state with a usurious loan from the US who itself borrowed it from China, for the gas that the EU state paid Russia for and with another 50% thrown in for the bookkeeping.

How does one “remorse a deal”?

Regret that a deal wasn’t made.

I was wondering if that was proper English myself, then realized that there are so many improper English fooling about in the world these days that ‘proper English’ has just become an oxymoron and gave it a pass.

The ‘proper Englishman’ has prostituted, oops – prostrated himself before the American barbarian.

Whether this came before, after or concurrent with the Saudi and Russian klepto-oligarch prostration is left for future historians to answer.

Remember Covfefe! And the fact that Smeagle Pompino (Pompei the First) has not seen his penis in 30 years! That does bad things to the lexicon.

Politics in a Vacuum
Reply to  Platon

He’ll have to lose some weight if he wants to be raptured without being ruptured.

“emperor of one-fifth of the world’s population”
If indeed he can be referred to as an emperor ,Xi has done very well for his citizens and given the proposed new silk road , could be very good for the people of the world also as over 130 nations have signed onto it..

Where do stupid-to-the-point-of-braindeath Americans think that the three hundred billion in tariffs is going to come from? Sheldon Adelson?
Good luck, Trumplestain!

I may be brain dead but I suspect they’re going to go TO Adelson, when my pisspot goes missing and I’m reduced to drunken Las Vegas gambling binges to try to recover and to forget my woes.

Los Americanos are becoming more and more prostrated with China’s insistence on not being afraid of them.
The remorse is setting in to such an extent that it is climbing semantic barriers and popping up in unexpected places.

A problem of perception. The Chinese see reality, the Americans are delusional. Trump’s infantile bragging about tariffs, which his struggling voters will pay – not the Chinese – illustrates the stupidity of the US negotiators. They have no bargaining chips in this game. They’ve woken from a dream where they were in charge of the world to find they are now the chumps. The Chinese are being gentle with these “drunkards” but soon they’ll get a sobering cold shower.

Posting....
wpDiscuz
27
0
Would love your thoughts, please comment.x
()
x
| Reply
Send this to a friend