Moments ago, Turkey issued an arrest warrant for a second US consular worker. Days ago, a US consular worker in Ankara was arrested for allegedly having ties to the illegal terrorist organisation of the exiled US based cleric Fethullah Gulen.

I recently published a piece saying that Turkey will likely escalate the full scale row with the United States. This now appears to be in full swing.

In Turkey, the US has picked a fight with a country not afraid to fight back

“When Barack Obama seized Russian Embassy property and insultingly threw Russian diplomatic staff and their young families out of the United States at a moments notice in December of 2016, Russia responded by inviting the young children of US Embassy staff in Russia, to a Christmas party.

The idea was that in shaming Obama’s lack of grace and adherence to international law and protocol, Russia would be ‘taking the high road’ and pave the way for a quick rapprochement under the seemingly more amiable Donald Trump.

The high road turned out to be a road to nowhere as the Trump administration, far from working to solve the crisis, has only escalated the problem by seizing even more Russian diplomatic and consular property in the US.

When it comes to Iran, short of targeting US assets in the Middle East, there is little Iran can do to retaliate against the US as Iran’s economic system is not tied into that of the US and hasn’t been for decades. Likewise, the US no longer operates any diplomatic or consular facilities in Iran.

But with Turkey, the United States is going to understand what instant retribution feels like, from a nation that is uniquely placed to extract vengeance and one with a track record of doing so.

The proximate cause of the current Ankara-Washington row is as follows: Turkey arrested a US consular worker who allegedly has ties to the terrorist organisation of the exiled Turkey cleric Fethullah Gulen. After the arrest, the US withdrew its visa issuing consular services in Turkey.

Hours later, Turkey decided to do the same in respect of Turkish consular services in the United States. 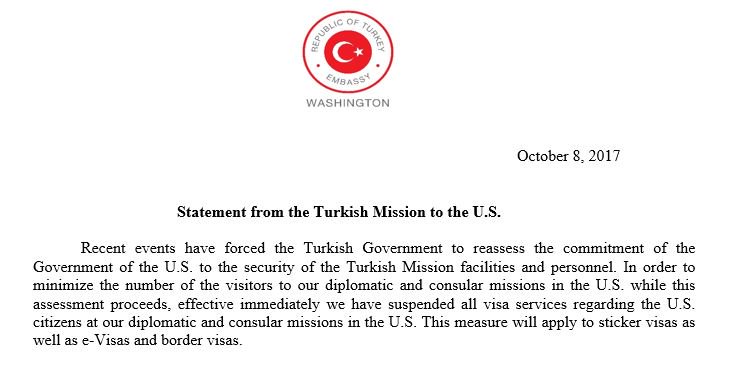 Now, Turkey has summoned the official Representative of the US Embassy in Ankara for urgent talks which will certainly be less than cordial.

Turkey has a long history of strongly reacting to real and perceived insults. Such Turkish reactions  often dwarf the responses of other nations in similar situations. Such an attitude, one expressed by both Kemalist and Islamist governments, cuts both ways. On the one hand, in 1974 the Turkish military invaded and occupied northern Cyprus in a move that was wildly in defiance of international law. Likewise, Turkey has a history of harassing, arresting and intimidating Armenian activists who  simply want the Turkish state to acknowledge the Armenian Genocide of 1915.

On the other hand, Turkey is a country that will rightly not tolerate any foreign interference in its internal affairs and whether after the Gaza Flotilla Raid of 2010 or Israeli meddling in Iraq’s Kurdish secession movement, Turkey is not afraid to take strong measures against a nuclear armed Israeli regime that many countries in the region seem to be frightened of.

Every country has an undeniable national character as well as a state character. Where Russia tends to respond with diplomatic rhetoric to insulting words and actions by other nations, Turkey acts with a far more blunt exactitude. The liberal western mainstream media for example, is constantly mocking the President of Russia and usually hardly any official says anything about this in Moscow.

By contrast, when a German comedian wrote an insulting poem about the President of Turkey, Turkey requested the arrest of the offending comedian and the issue quickly spiralled into an all out diplomatic row between Ankara and Berlin, one whose entrails continue to smoulder.

Already Turkey has offered a rapid proportional response to the United States for its removal of visa services in the country and early reports indicate that this is just the beginning.

Whatever one’s feelings are about Turkey and for many Greeks, Armenians and Syrians, these feelings are negative, the fact remains that Turkey is not afraid to defend itself, using almost all means necessary, even for infractions as seemingly innocent as speaking out against the Turkish leadership using strong or provocative language.

To put it another way, when the far-right Russian provocateur Alexei Navalny holds unauthorised rallies, he is often arrested for a few hours at a time for common charges related to disturbing the peace or holding a rally that blocks streets without official permission from local authorities. If someone like Navalny did similar things in Turkey, one could easily imagine him arrested for terrorism charges as well as violating the law of ‘insulting Turkishness’ or even worse.

I previously wrote that in provoking Turkey over the Kurdish issue, Israel has picked a fight with an enemy that is not afraid to fight back. All of the Israeli propaganda in the world, will not make Ankara scared of using harsh words and even taking meaningful actions against Israeli meddling in the region. Furthermore, as Turkey has a centuries long history of protecting Jews from European antagonism, the nonsense the Israeli regime proffers, saying that somehow opposing Israel means opposing human rights for Jews, is exposed as the patent absurdity that it is.

Likewise, now the United States, a country which bullies, threatens, invades and occupies countries with impunity, will now get a taste of Turkish anger. This is something far more intense than anything the US has recently received from docile Russia, businesslike China or moralistic Iran, let alone the countries America has succeeded in destroy like Yugoslavia, Iraq and Libya.

Of course, the antecedents to the Ankara-Washington row date back to America’s total lack of concern for the fact that Turkey continues to blame the US for sheltering Fethullah Gulen, the man held responsible for organising the failed Turkish coup of 2016.

Since then, things have only deteriorated further. The difference now is that Turkey has gone from being disgusted with Washington, to being openly angry. Turkey may be in NATO, but then again so was Greece in the 1970s and this did not prohibit Turkey from invading Hellenic Cyprus.

The US is in for a very rude awaking if it continues to escalate its rows with Turkey. It is frankly, a rude awakening that is long overdue. Furthermore, if the US really does want to engineer another coup in Turkey, the US will have to realise that Turkey’s army has been purged of most of its anti-Erdogan leaders and that furthermore, Russia, Iran and even China are now Turkish partners. America’s rude awakening just got even more real”.