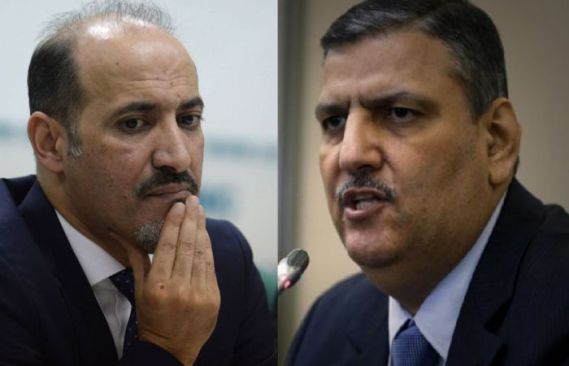 While Ahmed al-Jarba and Riad Hijab never had meaningful support in Syria, Saudi had consistently backed them and their colleagues in an effort to destabilise the secular Ba’athist Arab Republic.

Now though, both men are wanted in Saudi for “money laundering and smuggling”.

This is a further sign that the purges of Muhammad bin Salman are aimed at radically re-orientating the priorities of the Saudi regime. Additionally, Saudi has now all but admitted that its attempts to meddle in Syria’s sovereign political affairs have failed.

As I wrote yesterday,

“If viewed in isolation, the Hariri resignation appears like a clear Saudi organised attempt to foment discord in Lebanon by provoking Hezbollah, with the aim of weakening the resistance in Syria and opening up Lebanon to the kind of civil crisis which in the past has led to aggressive Israeli invasions and general strife.

However, when the events of yesterday are taken in totality, a different theory springs to mind, one which ought to be taken seriously, even if counter-intuitive at first glance.

After MBS’s ‘great purge’ of highly important figures in the Saudi ‘deep state’, including the billionaire and darling of western mainstream media, Prince Al-Waleed bin Talal, it is fair to say that Muhammad Bin Salman has taken the first strike against any would-be challengers or political opponents as he continues to consolidate his power, even before formally taking the throne from the elderly King Salman.

This ‘great purge’ which comes after the house arrest of former Crown Prince Muhammad bin Nayef, is a clear indication that MBS looks to turn Saudi into ‘his’ country just as Stalin turned the USSR into ‘his’ when he purged virtually all the remaining elements of the original Bolshevik leadership during the 1930s.

It is this parallel that is also important in another way. Many commentators, including contemporary Russian opposition leader Vladimir Zhirinovsky has remarked that Stalin’s purges, including of the army, left the Soviet Union less than adequately prepared to stop the fascist invasion on 22 June 1941. It should be noted at this point, that MBS’ purge includes many security officials.

MBS’ purges were clearly planned a long time in advance, even though the creation of an anti-corruption committee technically took place only hours before it issued the first degrees placing powerful Saudis under arrest. The fact that MBS sought to conduct many major purges at the same time, is indicative of a man who does not intend to give his opponents any time to regroup against him. Again, this is somewhat reminiscent of Stalin who held large scale trials which prosecuted many opponents (for Stalin, traitors) at one time.

This is significant because it is generally unwise to meddle in the affairs of countries abroad, when conducting such a deep and wide purge at home. This very phenomenon has been often used to explain why Donald Trump’s foreign policy is so chaotic. Trump’s domestic distractions have disallowed the formation of a coherent foreign policy.

Of course, if MBS’ opponents had differing views on how to handle Hariri, the purge may have been an insurance policy. The more likely scenario though is that many of the men purged would not have been able to impact the Hariri decision, not least because it would mean publicly going against the narrative that Hariri resigned because he feared an assassination attempt from Iran and Hezbollah rather than because the Saudi regime told him to go. Few in the wider Arab world believe this narrative, but in Saudi, one ‘has to’ acknowledge it as true for obvious reasons.

This therefore, forces one to consider why the Saudi regime would involve itself in the Hariri affair on the same day as the ‘great purge’?

The message to all powerful Saudis, including to Hariri, is that no one is too big to fall at the hands of MBS, even a Saudi citizen who is the Prime Minister in a foreign democracy. The fact that both Hariri and MBS are young men in a leadership role, would indicate that for the famously politically trigger happy MBS, it was also an ego boost.

What about the geo-political repercussions?

On the surface, the move will clearly enrage Iran, Hezbollah and to a degree anger Syria while emboldening Israel and extremist Sunni movements in the Arab world including al-Qaeda.

Practically though, Israel is all too aware that Hezbollah is far more powerful today than when it expelled Israel from southern Lebanon in 2006 and al-Qaeda, although making a final push in the Golan Heights with Israeli assistance, is nevertheless a terrorist group on its last legs in the Levant and Iraq.

As for Iran, while Saudi continues to spew predictably anti-Iranian rhetoric, Saudi’s pivot towards Russia and China necessarily prohibits further Saudi aggression against Iran, except for that which is limited to rhetorical statements that will irk Iran and give Russia a headache, but do little more.

MBS sees China and Russia as crucial partners that will help realise his Vision 2030 project to diversify the Saudi economy. This means that Saudi will have to increasingly play by both Russia and China’s rules, which mean abandoning proxy imperial ambitions, abandoning military threats against nearby states and possibly move towards selling energy in the Petroyuan.

Therefore, a radically different explanation for yesterday’s events in Saudi begin to emerge. Perhaps the Hariri ‘resignation’ and the great purge are meant less to encourage Israel and provoke Iran, Syria and Hezbollah than they are events used to send subtle messages to Russia and China, possibly with communiques made behind the scenes to clarify the meaning.

Such a message is summarised as follows: Saudi has surrendered in its attempts to politically influence the Levant and will allow the chips to fall where they may. The Saudi puppet is out of Lebanon and Saudi won’t do anything meaningful to oppose Hezbollah in the post-Hariri era in Lebanon. Instead, Saudi will focus on domestic political changes to pave the way for a more ‘eastern friendly’ MBS regime in Riyadh.

Here, the implied advantage to Russia is that President Michel Aoun will be allowed to form a new government in Beirut that will be more amenable to Russian and consequently Chinese interests in the region, thus giving the eastern superpowers an unbroken chain of partners in the region stretching from Pakistan to Iran, into Iraq and Syria and finishing on the Mediterranean with Lebanon.

In return, it is implied that Russia will continue to resist any US attempts to slow down MBS’ ascent to power.

To be absolutely clear, I do not believe for a moment that this is a ‘Russian plan’. Instead, Saudi is doing something whose long term outcome is naturally in Russia’s interest and Russia, a country which does not even intervene in the affairs of its enemies, will surely not intervene in the affairs of a Saudi state which is pivoting (however awkwardly) towards Russia and her partners”.

While the MBS purges are self-serving first and foremost, they are also part of his desired pivot away from over-dependency on the US. By publicly attacking its former political proxies for Syria, Riyadh is clearly showing that its internal matters now take precedent over directly meddling in the wider Arab world.