The Duran’s Alex Christoforou and Editor-in-Chief Alexander Mercouris discuss Republican Senator Ron Johnson’s ramping up of a probe into Joe and Hunter Biden, and their deep ties to corrupt Ukraine energy company Burisma.

Senator Ron Johnson told reporters on Wednesday that Senate Republicans are entering a new phase of their investigation into Joe and Hunter Biden and their ties to a corrupt Ukrainian natural gas company, Burisma.

Senator Johnson (R-WI) said he will likely release an interim report within the next month or two about his committee’s probe into the Biden crime family, Politico reported.

“These are questions that Joe Biden has not adequately answered,” Ron Johnson said. “And if I were a Democrat primary voter, I’d want these questions satisfactorily answered before I cast my final vote.”

As expected, House Democrats are pushing back on GOP Senators and accusing them of pushing ‘Kremlin talking points’ by accusing the Bidens of Ukraine related crimes.

“I am concerned to see that in the Senate there seems to be a renewed interest in furthering these bogus Russian narratives through the use of their investigative powers,” said House Intel Chairman Adam Schiff (D-CA). “I just think it’s so deeply destructive to be effectively working in a concert with Russian propaganda artists.”

Schiff said he would use his position as chairman of the Intel Panel to call out adversaries for “furthering Kremlin narratives.”

It was reported Tuesday Senator Ron Johnson will be calling in Andrii Telizhenko to testify in front of the Senate Homeland Security Committee.

Andrii Telizhenko worked as a political officer in the Ukrainian Embassy in Washington DC in 2015-2016.

Andrii Telizhenko spoke to The Gateway Pundit about the DNC-Russia collusion scandal back in December 2018.

The Gateway Pundit was the first publication to interview Telizhenko on his meetings with DNC operative Alexandra Chalupa in the Obama White House back in 2016.

Senators Johnson and Grassley have also requested Biden-Burisma docs from the Treasury Department, State Department and other agencies.

“In April 2014, Vice President Biden reportedly became the “public face of the administration’s handling of Ukraine.” Around the same time, the Vice President’s son, Hunter Biden, and his business associate, Devon Archer both began serving on the board of Burisma Holdings, a Ukrainian energy company,” the letter written by Grassley and Johnson stated, adding that Hunter was being paid as much as $30,000 per month (it was actually more).

Grassley and Johnson also stated that Joe Biden bragged about threatening to withhold a billion in aid from Ukraine if they didn’t fire Viktor Shokin, the prosecutor investigating Burisma.

“Well son of a bitch. He got fired,” Biden said of Viktor Shokin in 2018 to the Council on Foreign Relations.

Despite their protests to the contrary large swathes of American voters seem to have a death wish.

Land of Oz
Reply to  Citizenfitz

They’d be much better off wishing for a brain, along with the folks they vote for.

I certainly hope it doesn’t. Biden is not only mentally unfit for office, but also corrupt to the core, and a danger to the stability of our increasingly turbulent world.

All of the Above
Reply to  Haeul

This is so pathetic. Evidence as an irrelevant construct, you can’t seem to question anything that the Russians also happen to question without being accused of furthering Russia’s interests.

Do these idiots truly understand the seriousness and absurdity of what they’re engaged in?

These videos on the farce that is American politics today are where the terrible twins are at their best.
It’s beyond belief that some Democrats still think they can usher in Killary with all the skeletons in her cupboard, which make the Bidens look like a couple of sleazy planning officials. Perhaps they’re hoping for a financial collapse between now and November. Who knows. What a political system! It wouldn’t matter if it was some banana republic, and not a maniac nuclear superpower on the rampage all over the globe.

So if Biden is indicted, will his defence claim that he is unfit to stand trail due to diminished capacity?

He’ll claim he thought he was in Ohio not Ukraine, inaugurating a new Amtrak line and demanding the conductor do a U-Train maneuver to show off American ingenuity, a U-turn on a train.

Then he’ll claim he sent his son the budding artist to work at Burisma because he’d heard they’re involved in oil and could give his son oil painting lessons.

Sonny jumped at the chance because he assumed Burisma was Ukrainian for a burlesque show with lots of strippers.

Then, when sonny got there, the brown shirts convinced him to urge his dad to order a military assault on the Donbass because they make a lot of met coke there. He assumed that must be some high class blow and for a minute or two, forgot all about the strippers.

The budding detective genius at work, mapping his father’s demented dendrites and hoping for a cure: 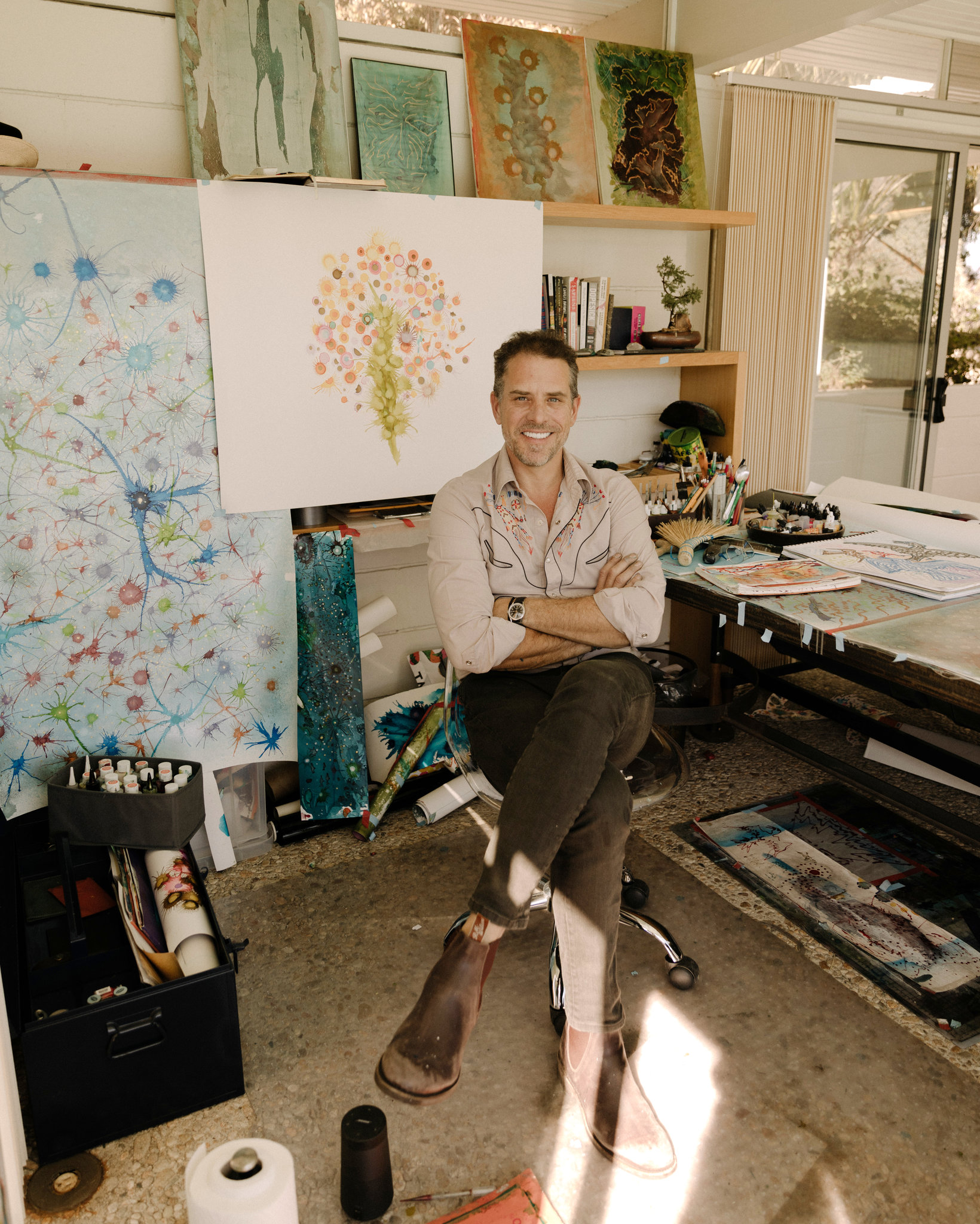 Blood money bought his leisure. Too bad it couldn’t buy him talent. Besides, is this the artwork of a genetic male? I’m having serious doubts.

That’s because BIDEN won’t go away.

Who's on First?
Reply to  Stunned at Sunset

Why should he think to go away when he doesn’t know where he is to begin with?

The more I think about this the more I think this is one of the Alexes’ best analyses. The Burisma issue will definitely NOT go away. Unless they are even bigger fools than anyone can imagine, the Democrat Establishment must have brought this into their calculations. Biden’s role is to knock out Sanders and fill the Convention with Establishment delegates ready to shoe in the Deep States’s choice in a brokered shoe-in once he’s ‘forced’ to drop out. Whether this is Hillary (with all her baggage) or some other Hillary-lite puppet remains to be seen. All manner of last minute… Read more »

Poof, and Burisma’s gone in the democrats’ communal subconscious. Never underestimate the ability of sheeple to act like well……..sheeple.
(and that holds true for both political sheeple ranges).

Fine, but the Republican sheep dogs won’t let this one go whatever the Democrat ones want. I used to share your despair about the ‘sheeple’ and then remembered that Christ constantly refers to his sheep without perjorative implications. The majority have always been easily led, the problem stems from those leading them. Apart from Putin, the world has few good shepherds or even effective sheep dogs (Salvini in Italy and Orban in Hungary stand out) to stand up to the rustlers and wolves. I’m afraid most us (myself as guilty as anyone) have spent our lives sniping ineffectively from the… Read more »

USA has the largest laboring-class in the Western world, over 50% of population compared to European nations with an average of 20% of population being laboring-class. This is do primarily to USA importing so many Afro-American slaves and migrant workers from south of the border. So, as the American laboring-class has always been kept enslaved as the 50% working poor, they are the 50% who refuse to vote. And so, Alex and everyone else in media comes up with every excuse under the sun for why the 25% most educated keep winning all elections. “Bernie Sanders failed to be aggressive”… Read more »

Oh my
Reply to  John Ellis

Don’t you think you’ve been laying it on a bit thick lately?

Tjoe
Reply to  Oh my

John seems to be lamenting the “black-list” that more and more are joining in public media. RT long ago. Then there are the “self exiled” like read the Disqus terms and conditions and see one is giving up any anonymity to insiders..